If you wish to communicate with me about steam trains and related railway art, or to respond to requests for answers to my queries, please email David, at : platt.precology@gmail.com

In today's post, 1st October 2021, I am featuring an 80-piece wooden jigsaw from Ian Allan showing a steam train and an early e.m.u. (electric multiple unit). 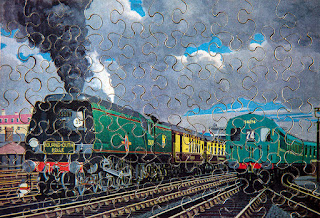 I am unsure of the artist's name but a good guess might be Vic Welch. A British Railways Southern Region, Bulleid 'Pacific' (Merchant Navy class), No. 35017 Belgian Marine, is leaving Waterloo Station heading the 'Bournemouth Belle' Pullman service. To the right hand side of the picture, an e.m.u. suburban train, is passing at speed. The artwork is clean and pictorial, ideal for jigsaw production. At least ten Vic Welch paintings can be found in the Railway Colour Album (1962), published by Ian Allan. Some of them would morph into superb puzzles if they have not been used, for that purpose, to date.
Posted by David at 17:33 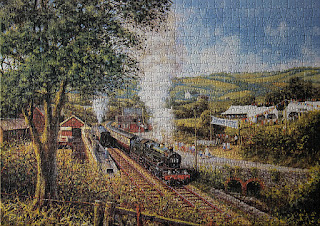 Peter's artwork generally places a steam train or two in a branchline station, within a countryside environment. In Summer Saturday my own mind is a little confused, however. View the train on the right - I can't identify the BR Western Region locomotive ('Castle'?). The lamps on the buffer beam indicate an express train, but if this is right, the people at the Fete must have arrived on the smaller, local train on the opposite platform. But, with no foot-bridge linking both platforms, people must have used a barrow crossing, (a wooden pedestrian crossing) out of sight in the background. The reporting number 117 on the smoke box door - does anyone know this route? If you do, please email me. There are many people in and around this branchline station, all I assume, attending the summer fete. A huge tree dominates the picture on the left and several large marquees can be seen at the Fete. The background of rolling hills and valleys is typical of Peter's work.
Posted by David at 23:50

Today's puzzle, 26 August 2021, features a Falcon 1000pc example titled Waiting on the Platform. The artist is Vic McClindon, a regular contributor to artwork associated with the jigsaw portfolios of Dutch manufacturer, Falcon/Jumbo. 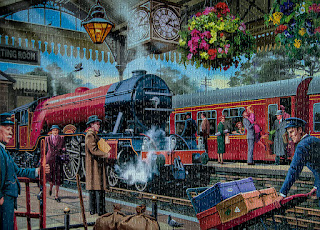 Victor's composition is very busy, colourful and pictorial, to say the least - I don't think that he could have included many more 'cameos' in his artwork. I can't see a 'kitchen sink' but everything and everyone possible, is included in this imaginary, station scene. The problem for me is identifying the 'Pacific' (4-6-2) locomotive in LMS (London Midland Scottish Railway) red livery - no number, no name. I'll leave it to you to identify all the characters and railway related items in the picture.
Posted by David at 23:38

In this post, 29 July 2021, I am featuring a highly pictorial Falcon jigsaw in the 'Travelling By' series, titled Travelling By - the Canal with artwork by Kevin Walsh. 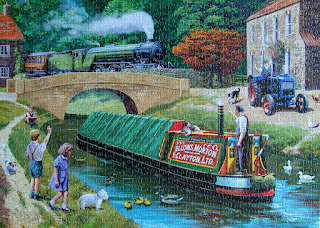 In the picture, a LNER class 'V2' 2-6-2 locomotive, No.4777, shares the 'spotlight' with an equally impressive canal barge. No.4777 is heading teak coaches, passing by a canal bridge. The class of 184 engines, designed by Sir Nigel Gresley, graced London & North Eastern Railway (LNER) metals (rails) from 1936. Also included in Kevin's busy composition are ducks, geese, children, dogs, a hen and a tractor. A boy appears to be waving to the tractor driver and the drivers of the locomotive and canal barge are acknowledging each other also. Another boy is fishing. This is without doubt a jigsaw that emanates pictorialism - an imaginative approach to realism. Some changes appear to have been made to a previous painting as I can find no reference to the canal haulage company name on the barge, unless you place an 'F' before the 'E' on the canal barge nameboard.
Posted by David at 18:15

Two more from 'The Works'

Today's post 11 July 2021, comprises two pictures of puzzles, both branded 'Corner Piece' for 'The Works' stores (their own brand?) 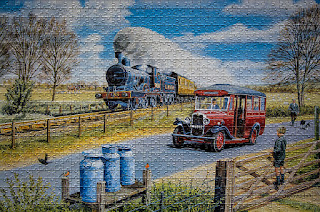 Both jigsaws, of 500 pieces, feature illustrative artwork by Trevor Mitchell and the first, above, in a different, simplified version, has been used in an earlier post. The puzzle above is titled Racing Rivals and the simplified version, titled The Rivals, can be viewed in the post of 26 Jan 2011. An LNER class 'E4' 2-4-0 tender locomotive, No.7490, is shown heading a short passenger train on a slightly elevated line, racing a vintage bus, registered TM 9342, on the adjacent road. Trevor's additions to his simplified example, are as follows - extra space added to the right, a man crossing the road with his dog, a young boy sat on the gate observing the 'race', and blackbird, bullfinch, chaffinch and blue tit adding colour and nature to the composition. The blue tit is on a gate post added to the right hand side. 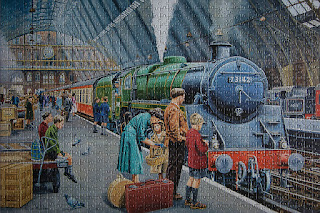 The second puzzle, All Aboard at St Pancras, shows a busy scene at the famous London station. The huge canopy looks superb; the stylish clock, outstanding. The main locomotive in the picture is a BR 'Standard' class 'V' 4-6-0 type, No.73142, designed by Robert Riddles. No.73142, one of a class of 172, was built at Derby Works in 1956. In Trevor's painting the engine is at the head of an express passenger service. Trainspotters, some chatting to the engine driver, station staff, and many passengers are mingling on the platform. Some are boarding the train. An array of luggage is also scattered throughout the composition. In the background, the coal bunker of an LMS, Stanier class '3P-B' 2-6-2 tank locomotive, No.40110, can be seen. This locomotive was built at Derby Works in 1935, one of a class of 139 (built 1935-1938). The last two batches of this class were built at Crewe Works.
Posted by David at 16:11

Today's jigsaw, 21 June 2021, titled Christmas at Basingstoke, is a third for this blog from Rothbury Publishing. 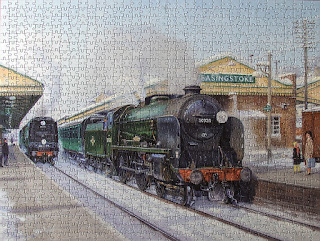 Robin Pinnock is once again the artist for this super puzzle. 'Schools' class 4-4-0 No. 30926, Repton, of British Railways Southern Railway (BRSR), is pictured heading typical green coaches, ready to leave Basingstoke Station with a stopping service to Waterloo. To the left is 'West Country' class 4-6-2, No.34105 Swanage, also of BRSR, heading another passenger service. The scene is dated c1962 and Robin has enhanced his picture with a covering of snow. Both of these locomotives are preserved.
Posted by David at 23:29

The famous Battledown Flyover is the main subject in todays jigsaw, 24 May 2021. 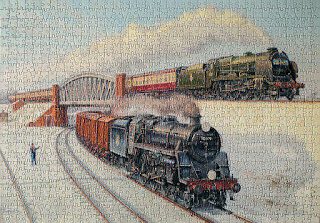 A jigsaw of 1000pcs from Rothbury Publishing titled Bowling over Battledown features a junction on two levels; it is part of a large series of puzzles duplicating the artwork of Robin Pinnock. A ‘Lord Nelson’ class 4-6-0 locomotive, No.30851 Sir Francis Drake, is pictured heading ‘The Cunarder’ Boat Train over a girder bridge known as the Battledown Flyover. The train is travelling from Southampton carrying passengers from the 'Queen Elizabeth' liner to Waterloo Station. Passing beneath the girder bridge is a BR ‘Standard’ Class ‘4’ 4-6-0, No.75079, heading a freight train from Salisbury.To the left of the picture a lone railwayman, acting as a superb counterbalance to the trains in Robin's composition, acknowledges the trains as they pass by. Battledown Flyover girder-bridge is 3¼ miles west of Basingstoke, Hampshire. Locomotive No.75079 is preserved on the Mid Hants Railway (Watercress Line).
Many of Robin's excellent steam railway paintings have been used by Rothbury for jigsaw puzzles, prints, cards etc. He has produced so many that I think a book of his railway paintings would be very popular, joining the increasing number of superb books by artists such as Philip Hawkins, John Austin, George Heiron, Terence Cuneo, Don Breckon, Barry Freeman, Malcolm Root, Hamilton Ellis, Chris Woods, David Weston etc., etc.
Posted by David at 08:10

'Bittern' - in a crosswind

A jigsaw produced from a photograph taken by yours truly is featured in today's post, 9 May 2021. I must admit that the enjoyment of completing a jigsaw increases several-fold when the jigsaw picture is your own. 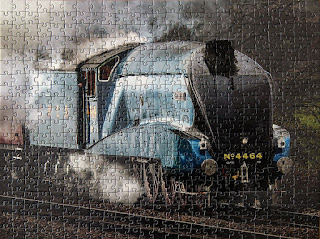 The 500-piece puzzle was made by myphotopuzzle.co.uk using 2.2mm cardboard and supplied in a box complete with a title of my choosing. Both jigsaw and box are shown. The title of my jigsaw is Class A4 'Bittern' - in a crosswind. The photo of the 'A4' was taken on the West Coast Main Line as she approached Red Bank, Newton-le-Willows, on a very windy day in March, 2014. Typically, for a 'Special' excursion, the engine was turned out immaculately in LNER, Garter Blue livery. No.4464 was built at Doncaster Works in 1937 and re-numbered as 60019 by BR, in 1948. 'Bittern' spent her working life operating between London, York, Newcastle and Edinburgh on the East Coast Main Line and in December 2013, became the fastest steam locomotive in preservation, reaching 93mph** on a historic run. She is currently in storage at Jeremy Hosking’s Locomotive Storage facility in Margate, waiting for her turn to be overhauled at LNWR Crewe. **Surpassed by Peppercorn 'A1' Tornado in 2017; No.60163 Tornado recorded 100 mph in April of that year. 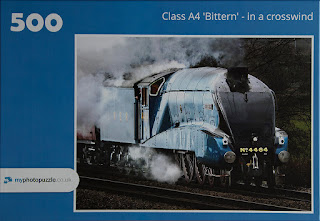 For this post, April 26 2021, I am describing a recent Gibsons' 500-piece jigsaw titled On Early Shift. The jigsaw replicates a cropped version of a poster picture. 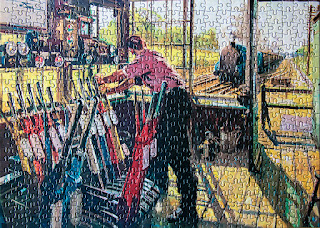 The 1948 British Railways’ poster, On Early Shift, was painted by Terence Cuneo. It depicts the interior of the Greenwood signal box, New Barnet, London, with a signalman operating a lever. At the same time he is looking through the windows watching an express passenger train, hauled by an ‘A4’ class 4-6-2 locomotive of Sir Nigel Gresley, approaching at speed. The text at the base below reads "Greenwood Signal Box, New Barnet" with the poster title. The British Railways 'totem' logo is included on both sides. The original poster, one of the first for the newly formed British Railways, was sold for £2,500 in 2014. When viewing the jigsaw, it is obvious that the picture has been cropped, but don’t look for the famous mouse. Only Cuneo’s paintings from 1953, feature a hidden mouse in his compositions. His cat entered his studio one day and ‘gifted’ a dead field mouse to him, leading to the famous added rodent. For more Cuneo jigsaws, just input his name in the search bar above. A picture of the original poster is shown below. 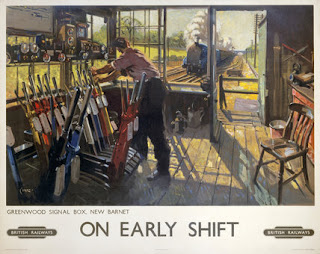 This post, 12 April 2021, describes a vertical format, 400-piece jigsaw from Sovereign Publications, (although labelled as 600 pieces). 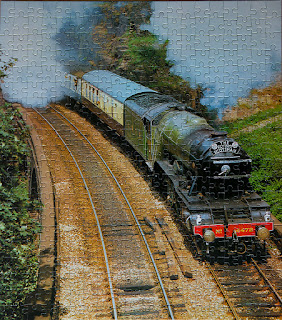 The Bill Sharman photograph features the famous Sir Nigel Gresley locomotive class 'A1', later class 'A3' 4-6-2, No.4472 Flying Scotsman, in LNER apple green livery. No.4472 is heading a 'Special' - 'The Flying Scotsman'. The picture looks as if it was taken when the engine was heading a 'Heritage Railway Special' or a Main Line 'Special. Go to the post of 28 June 2011 for a description of the two different identities - locomotive and train. The title of the jigsaw is LNER Class 'A3' Flying Scotsman.
Posted by David at 15:28

The Ten Most Popular Posts on the Blog