The first is a 250-piece example titled GWR Castle on Broadlands Viaduct. The artwork is courtesy of Mike Jeffries. The 'Castle' class 4-6-0  depicted is No.4099 Kilgerran Castle. It was built in 1926 and was designed by GWR Chief Mechanical Engineer, Charles Collett. However there is a twist in the tail for this puzzle. Mike also has an original painting on his website titled GWR Castle on Broadsands Viaduct featuring 'Castle' class locomotive No.4089 Donnington Castle. It is almost the same as the Wentworth picture but not quite.

The plot thickens. Broadsands Viaduct is an Isambard Kingdom Brunel structure near Churston in Devon; it is on the Paignton and Dartmouth Railway. I can find no reference to a Broadlands Viaduct.

The second picture shows the 250-piece wooden jigsaw titled The Mallard, from Malcolm Root's original artwork. Malcolm has reproduced on canvas, the 1938 record run of the famous 'A4' class 4-6-2 locomotive, No.4468 Mallard, which had been  built earlier in the same year. The locomotive, dynomometer car and six coaches reached a speed of 126 mph when descending Stoke Bank on the LNER main line.  The locomotive is part of the National Collection at York.
Posted by David at 21:36

The first picture shows a 200-piece jigsaw from Falcon titled Cookham Manor and Burton Agnes Hall. The double heading GWR pair are part of the 'Steamtrains' series 2, of 1982. The orignal artwork was by Paul S. Gribble. Charles Collett designed the 4-6-0 'Manor' class and Frederick Hawsworth the 'Modified Hall' class of larger 4-6-0s. 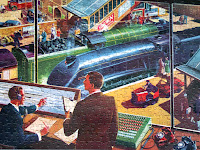 The Main Line Station, a 400-piece Terminus puzzle from Tower Press, shown in picture number two, is one of very few puzzles to show station office staff in close up. Two male staff, one wearing headphones,  are overlooking the main lines from an elevated office. They have push button equipment, two telephones and an automated diagram of the local rail system before them. Two Gesley 'Pacifics' are standing at the platforms beneath. The artist is not named but the graphic artwork is clear and colour saturated, ideal for jigsaw puzzles.

In 1985 Waddingtons produced a set of four jigsaw puzzles, each one replicating a postage stamp depicting a Terence Cuneo painting. They made a handsome and popular set. The set comprised the Flying Scotsman (17p stamp), Golden Arrow (22p), Cheltenham Flyer (29p) and Royal Scot (31p).  Picture number three in this post shows the puzzle depicting the 22p stamp. But why was there no fifth puzzle replicating the Cornish Riviera Express on the 43p stamp?
Posted by David at 16:57