On August 8th 2014 I posted two pics showing 300-piece jigsaws from the Philmar 'Great Little Trains of Wales' series of 6. In today's post, 21st April 2017, I will introduce you to three more examples from this set. Unfortunatley the last example I purchased, The Bala Lake Railway, had six pieces missing when I assembled it, one of the disadvantages of buying from the secondary market.

Picture one features the jigsaw titled Vale of Rheidol Narrow Gauge Railway. The railway runs from Aberystwyth to Devils Bridge and was opened in 1902 to transport lead ore to Aberystwyth harbour from the Rheidol Valley. Ownership passed to British Railways in 1948 and remained so until the railway passed into private ownership in 1989. It is now owned and run by a Charitable Trust. The Aberystwyth - Devils Bridge line has three locomotives currently running, Nos 7, 8 and 9.  The locomotive in the picture is a 2-6-2, No.7 Owain Gyndwr, built in 1923 by the Great Western Railway (GWR) at Swindon, along with No.8 Llywelyn. A brand new No.9 Prince of Wales appeared a year later disguised as a rebuilt locomotive, for accountancy purposes. These three locos replaced original locos, No.1 Edward VII and No.2 Prince of Wales. A diesel loco, No.10, can also be seen on the railway. 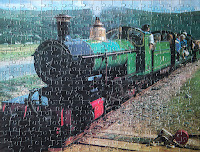 Picture two shows the jigsaw titled Fairbourne Railway, a 2ft gauge railway built in 1895, and 12.25 miles in length. The line ran from Fairbourne Village to Barmouth Ferry Station. It later changed owners and gauge several times until 1986 when it was re-built to 12.25 inch gauge. Four new steam locos were introduced - Yeo, Sherpa, Beddgelert and Russell. Under new owners in 1995 more money was raised for improvements and in 1999 the line was transferred to Charitable Trust ownership.  The loco in the picture is a 2-4-2 type named Sian. This little loco has a chequered history. She was built by a Stourbridge company in 1963 and delivered to the Fairbourne Railway a year later.  She was 'Americanised' in 1984 and sold in 1985 to run on the Littlecote House Railway in Wiltshire. She was de-Americanised on the Bure Valley Railway in 1992 but it wasn't until around 1997 that she was returned to her near-original guise, following other ownership changes and railway movements. Subsequent changes meant that she is now stabled at Windmill Farm Railway in Burscough, near Southport. The photograph used for the jigsaw was taken before Sian was Americanised in 1984 and sold in 1985.

NOTE : An advertisement in the latest edition (466) of STEAM RAILWAY Magazine states that Sian will be returning to the Fairbourne Railway for a Steam Gala on 27th-29th May 2017. Sian will be giving rides over the newly extended 15 inch gauge track.

The jigsaw shown in picture number three is titled Welshpool and Llanfair Light Railway. The 2ft 6ins gauge, 8.5miles long railway (opened in 1903) runs from Welshpool to Llanfair Caereinion in Powys. It closed in 1956 - original engines No.1 Earl and No.2 The Countess were still in use. These locos were built by Beyer Peacock in 1902 and named after the Earl and Countess of Powys. They returned to traffic at Llanfair in 1963 when preservation work had begun. Several other steam and diesel locomotives can be seen on the railway including No.12 Joan,  built by Kerr Stuart in 1927, originally for sugar cane traffic in Antigua.


If you are interested in buying any of the puzzles you have previously seen on this blog I am now in a process of downsizing my collection and some of my 300 puzzles must go. The process has already started and many have been sold privately, or on Ebay. Let me know of any you may be interested in by email (address directly above).
Posted by David at 15:44