In today's post, 9th November 2012, I am showing two photographs of wooden jigsaws, both featuring artwork by one of my favourite artists, Don Breckon. I have described other examples from the same series in previous posts - 24th January 2012 and 22nd July 2012.

Wooden jigsaws are obviously more expensive than cardboard equivalents and pre-date them by around 120 years. It is widely believed that the first jigsaw puzzle, or 'dissected puzzle' as it would have been called originally, was made by London engraver and  map maker John Spilsbury c1760. Although more expensive, wooden jigsaws don't lose value at the same rate as cardboard examples and are more appropriate to pass on as family heirlooms.

The first picture, showing a 155-piece puzzle, is titled Changing Trains. Ex GWR 'Castle' class 4-6-0, No.5098 Clifford Castle, is waiting in Cornwall's Lostwithiel Station in the late 1950's with a Penzance bound passenger service. This train comprises main line chocolate and cream passenger coaches. Also in the picture is a branch line train of BR maroon suburban coaches waiting to take passengers to Fowey (as indicated on the station name board). Heading this local service is one of the little 'workhorses'of the old GWR, a '14xx' class 0-4-2T tank locomotive. 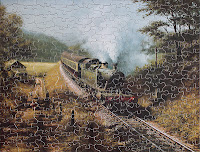 The second picture shows a 238-piece jigsaw titled Racing the Train. The jigsaw features a superbly typical Breckon country painting showing a branch-line in the West Country.  A suburban service, headed by GWR 2-6-2 '45xx' or 'Prairie' class locomotive, No. 4570, is travelling on a single line beside a dirt track. On the track two young boys, on foot, appear to be racing the train.
The origin of these superbly cut wooden puzzles is unknown to me but they are part of a series; of the series, six puzzles are in my collection.
Posted by David at 20:51