The centre of attraction in today's post, 23rd October 2018, is the new-ish, 4-6-2 steam locomotive No.60163 Tornado. I say this because she is the most recent steam locomotive to be built in the UK, (at Darlington Works in 2008), and the first one since Evening Star graced BR metals (rails) in 1960. Tornado has been a regular attraction on the Main Line and at Heritage Railway events since her introduction in 2008. She is the only LNER, Peppercorn 'A1' class locomotive in existence, as the other members of the class were all scrapped in the British Railways' era. 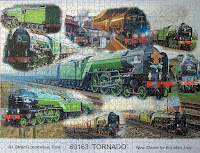 Tornado is also the only steam locomotive to reach 100mph for over 50 years, the first being Flying Scotsman or City of Truro - depending on whether you are an LNER or a GWR  enthusiast. She was built for the A1 Locomotive Trust and photographs of the engine have been arranged as a montage in the jigsaw above. The 1000-piece jigsaw, simply titled 60163 'TORNADO', was produced by Ryco Crafts of Ripon.
Posted by David at 20:35