Steam with other forms of Transport

In this post, 31st March 2014, I am using three pictures of jigsaws each featuring a steam train with other forms of transport. The first jigsaw represented is a current issue whilst the others are older.

In this jigsaw puzzle Kevin Walsh's artwork includes a classic red sports car with driver and passenger contrasted with a farmer driving a blue tractor attached to a hay-filled cart. London & North Eastern Railway (LNER) ‘A1’ class 4-6-2, No.4472 Flying Scotsman is pictured hauling a long rake of teak coaches somewhere on the East Coast Main Line. The 1000-piece puzzle from Falcon, titled Wartime Summer,  depicts an “oasis” in WWII Britain. However, the summer tranquil scene is interrupted by two Spitfire fighter planes, reminding everyone beneath of the reality. Two boys and three dogs complete the picture and leave little space for further inclusions.

Picture number two shows a small 20-piece wooden puzzle from Tower Press's Little Folk series. The jigsaw is titled The Express Train. Pictured is a huge London Midland & Scottish Railway (LMS) 'Princess Coronation' class 4-6-2, No.46245 City of London hauling a rake of British Railways (BR) carmine and cream passenger coaches beneath a road bridge. On the bridge is a single-decked bus and above that is a helicopter, one of the few jigsaws to depict this type of transport. Three children are included as spectators to add that special human interest to the composition. The artist is not named.

A Falcon 500-piece jigsaw, titled Underneath the Arches is featured in this picture, showing a typical town centre scene (c1950's) dominated by a large bridge. Single and double decked buses, cars and a small blue van are included  in the busy scene with a BR Eastern Region 'B1' class 4-6-0 locomotive passing over the bridge with a passenger service. The early 'cycling' lion' motif on the tender suggests a date between 1948 and 1956 for the subjects in David Wright's artwork. Several people and an iconic red telephone box are included in David's illustrative style.
Posted by David at 10:46

Oliver Bulleid was the Chief Mechanical Engineer of the Southern Railway (SR) from 1937 until Nationalisation (British Railways) in 1948. He was a visionary in steam  locomotive engineering, incorporating many novel features in his designs. Probably his most famous among the latter were his 'Pacific' (4-6-2) locomotives used to head major Southern Railway and British Railways Southern Region (BRSR) expresses.

The first, ‘MN’ class No.21C1 Channel Packet, left Eastleigh Works in 1941 liveried in her regal SR malachite green, and engulfed in her air-smoothed casing. The ‘Pacifics’ were numbered with a 21C prefix, a continental representation of wheel arrangement - the number of axles on the front bogie was denoted by a '2', followed by a '1' for the number of axles on the rear pony truck, the six driving wheels being represented by the letter 'C'. The final number was that of the locomotive, No.1 in the case of Channel Packet. Another twenty-nine ‘MN’ class members were built, the final one, No. 35030 Elder Dempster Lines, in BR days, 1949 (hence the BR numbering). This class was designed, principally, to operate the heavy expresses to the West and the prestigious Continental Boat Trains. Around ten members of the ‘MN’ class survived the scrap yard whilst another, No.35029 Ellerman Lines, is a sectioned exhibit at the National Railway Museum in York. Because the class was designed to haul the heavy boat trains, at the behest of one of the shipping line owners, they were named after shipping lines.

The ‘West Country’ and ‘Battle of Britain’ classes were scaled down versions of the ‘MN’ class, identical, mechanically, and known as the ‘Light Pacifics’. They were also known, affectionately, as ‘Spam Cans’. The ‘WC’ locomotives were named after cities, towns and tourist spots in south-west England. The ‘BB’ class carried wartime commemorative names of RAF squadrons, predominantly from the Battle of Britain. The first, light ‘Pacific’ No.21C101, Exeter was built in May 1945 with a further one hundred and nine examples following  by 1951.

The first picture shows a 400-piece puzzle from K.G. Games. The jigsaw features a re-built Bulleid ‘Merchant Navy’ class 4-6-2,  No.35030 Elder Dempster Lines, a typical locomotive used to haul the famous Atlantic Coast Express (ACE). This class followed on from 4-6-0 types such as ‘King Arthur’ and ‘Lord Nelson’ class examples. ‘Schools’ class 4-4-0’s were also used occasionally. The motif on the tender is the later BR totem design (from c1956). 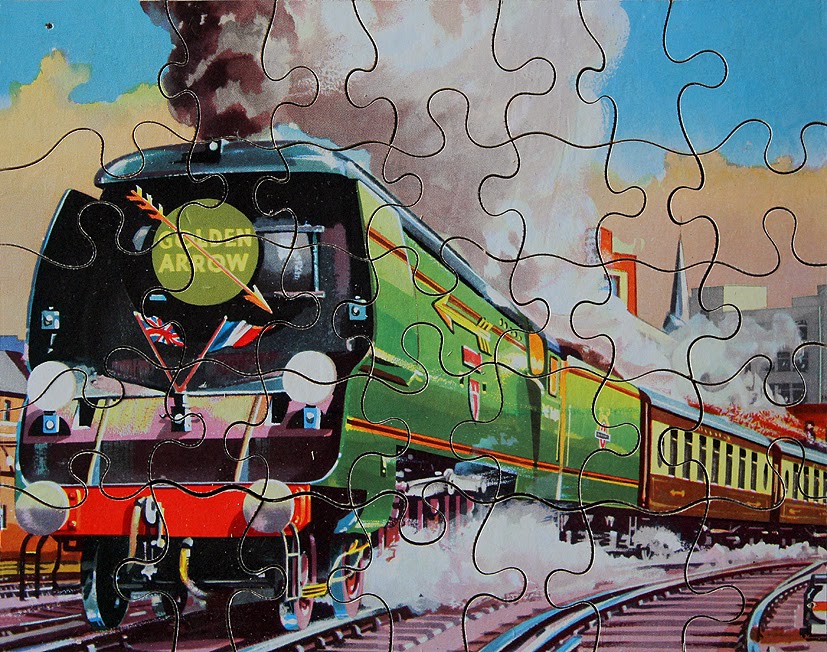 Picture number two features another Bulleid 'Pacific' heading the famous 'Golden Arrow' express. The latter ran from London Victoria to Dover and was an all Pullman luxury service originally. The motif on the tender is the early BR 'cycling lion' type (1948-1956). The jigsaw is a 35-piece example, in wood, from Victory.

For this post, 11th March 2014, I am using photographs of six small puzzles from a respected British manufacturer.

A.V.N. Jones & Co. Ltd., made excellent wooden jigsaw puzzles from their London base in the 1920’s and 1930’s. Among them was a series of ‘six-in-one’ puzzles where six, postcard size jigsaws were marketed in a single box. I have one of this series featuring six steam trains in my collection from illustrations by G. R Micklewright; other series featured wild animals and ships.