Today's post, 29th June 2017, features two locomotives designed by (Sir) William Stanier for the London Midland Scottish Railway Company (known simply as the LMS). Stanier was Chief Mechanical Engineer of the LMS from 1931 until retirement in 1944. In my view he designed the best class of steam locomotives ever built - the 'Princess Coronation' class of 4-6-2 'heavyweights'.

The first picture features a jigsaw from Waddingtons of 1000 pieces, titled Midland Revival.  The jigsaw picture depicts a canal and railway scene, set in summer and beautifully executed by the artist, Barry Freeman. A canal boat, a symbol of simplicity, tranquillity and charm is compared with an express steam locomotive, a symbol of speed, power and majesty passing over a small canal bridge. The two ages of travel are superbly integrated in Freeman's pictorial composition. Human interest is provided by a family party  waving to the train; the boat passengers also acknowledge the train. A few ducks on the canal provide additional interest. The locomotive, a 'Jubilee' class 4-6-0 locomotive, No 5593 Kolhapur, is shown in true' LMS Red' livery 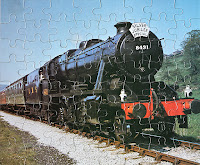 The second picture features an '8F' class 2-8-0  locomotive, No.8431, a Stanier freight locomotive (note the black livery)  which also carried out passenger duties when required. The latter is depicted in the jigsaw photograph. The 64-piece jigsaw by Philmar, part of a series of 4 (all featured in previous posts) is titled  LMS Locomotive Class 8F.