I've been meaning to post this puzzle for quite a while now so today, 4th October 2017, here it is. 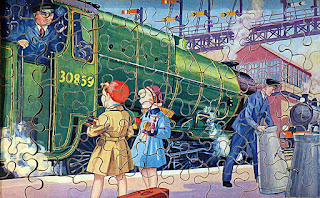 I know little about this puzzle but something about it suggests the manufacturer was  Chad Valley. The title is also unknown as it appeared on Ebay as an untitled, unboxed and unattributed puzzle. It is however a delightful, wooden jigsaw of around 70 pieces, made obviously, with children in mind. The boy and girl are carrying a locomotive and a doll, respectively, and a suitcase is partly visible in the foreground. They are chatting to the engine driver. There is much more information pictorialised in this puzzle for inquisitive minds. A porter is lining up milk churns; another train is approaching from the right; a signal box is clearly shown and a large signal gantry completes a busy composition.
The locomotive in the picture is ex Southern Railway 4-6-0 No.30859, Lord Hood, one of Richard Maunsell's 'Lord Nelson' class, built between 1928 and 1929. This particular locomotive, No.30859, was built in March 1929.
Posted by David at 10:06