The jigsaw described in this post, 6th April 2012, is a very unusual example. 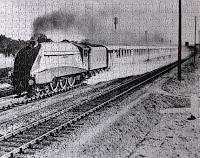 When one considers that the steam age and monchrome photography coincided for over one hundred years it is surprising that very few jigsaw puzzles replicate black and white photographs. Although not reproduced from a particularly good, original photograph (compared with modern examples) a monochrome jigsaw in my collection, of 550 pieces, was made by  Robert Frederick Ltd., and titled The Silver Jubilee Steam Train 1935; it was issued in 2004. The photograph depicts the 'A4' class 4-6-2 locomotive, No.2509 Silver Link, heading the famous express. This engine was one of four specially designed by (Sir) Nigel Gresley in 1935 to head the express train.  A further thirty one 'A4's' were built to complete the class. Because of similarities within the grey tones this puzzle takes longer to complete than a corresponding coloured jigsaw. The small right hand side pieces are non-interlocking with each other, another problem associated with this puzzle.
Posted by David at 17:41