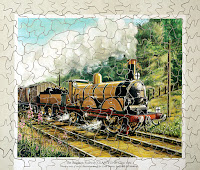 The Brighton Railway 'GLADSTONE' class 1882 is one of four, plywood jigsaws showing early steam engines from a series made for Exide Batteries. The legend along the base of each puzzle reads “one of the series of twelve illustrations drawn for Exide batteries by C. and W. Meadway”. The puzzles are of 190-200 pieces and semi interlocking. The artwork was taken from a 1960’s Exide Batteries' calendar illustrated by the husband and wife team. Another in the series, A BROAD- GAUGE 8-FOOTER: G.W.R. 1851-1892, can be seen in the post of 9th April 2014. William Stroudley designed the 0-4-2 'B1' class of express locomotives for the London Brighton and South Coast Railway (LB&SCR) between 1882 and 1891. The class of 36 became known as the 'Gladstones' after the first member of the class. No.176 Pevensey (built 1890 withdrawn 1929) is the locomotive in the picture in the superb LB&SCR livery. 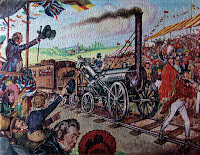 The second photograph shows George and Robert Stephenson's famous Rocket locomotive at the opening ceremony of the Liverpool and Manchester Railway in 1830. The 400-piece Regency puzzle is titled The Iron Road; the illustrative style artwork is excellent but the artist is not named. My puzzle is housed in a poorly printed box but the puzzle looks superb.
Posted by David at 00:22

For this post, 13th May 2015, I have chosen a series of four, excellent 1000-piece Whitman puzzles from my collection. The series is titled The World of Steam.

The first picture shows the jigsaw titled Flying Scotsman. Each jigsaw in the series depicts a famous named train produced from the quality illustrations of artist Edgar Hodges. The fastest steam locomotive in the world, 'A4' class 4-6-2 (Pacific) No.4468 Mallard, designed by the immortal (Sir) Nigel Gresley, is pictured at the head of a rake of Gresley teak coaches. The Kings Cross to Edinburgh express is working hard to exit Edinburgh Waverley Station for the return journey. A few trackside workmen are in attendance, a typical Hodges' addition. The locomotive is in London & North Eastern Railways (LNER) livery; 1923-1948. As the locomotive was built in 1938 the picture era is narrowed to 1938-48.

Picture number two features a giant 'King' class 4-6-0 designed by Charles Collett in early British Railways days (1948-56) as signified by the 'cycling lion' BR logo on the tender. The locomotive is pictured storming out of a station (Paddington?) on its way to Penzance, The locomotive is No.6015 King Richard III (built in 1928). The jigsaw is titled Cornish Riviera.

Also from the same series is a jigsaw titled Golden Arrow. This express boat train from Victoria to Dover was often hauled in Southern Railway days (1923-48) by a 'Lord Nelson' class 4-6-0 locomotive of Richard Maunsell. A large or light 4-6-2 (Pacific) locomotive of Oliver Bulleid hauled the train from 1941 (large)and 1945 (light). The locomotive in the jigsaw picture heading the luxurious Pullman coaches is Southern Railway liveried Bulleid 'West Country' class 'Light Pacific' No.21C139 Boscastle, built in 1946 (picture is therefore dated narrowly, 1946-48); the latter date was the date when the Southern Railway became part of British Railways. The exciting headboard, golden arrows on the sides and British and French flags rising from the buffer beam  contributed to a unique experience for viewers of this superb express boat train.

The fourth picture shows the final jigsaw from the Whitman The World of Steam series titled Royal Scot. The express ran between Euston and Glasgow Central on the West Coast main line in direct competition with the 'Flying Scotsman' express, the East Coast main line equivalent. 'Princess Coronation' class 4-6-2 of (Sir) William Stanier, No.46248 City of Leeds, is pictured in Hodges' artwork at speed probably in the Cumbrian Fells. The livery is that of the London Midland and Scottish Railway (LMS) and the illustration is based on the era 1956-68, within the British Railways era. The locomotive entered service in 1946 and was withdrawn in 1964 therefore the picture era is 1956-1964.