In previous posts I have selected favourite artists John Austin and Barry Freeman and described their influences on railway art used in the jigsaw trade. Today, 24th January 2012, I am doing likewise for another of my favourite artists, Don Breckon.

When I cast my admiring eye over Don's railway paintings I immediately think of the interaction between the community and the permanent way. For example, in some pictures people may be pausing from work, relaxation or recreation while simultaneously admiring a steam train, in awe of the power and majesty on view before them. In others, children may be fascinated onlookers, watching and learning or simply waving to passengers, or playing beside a line; or a family may be enjoying a picnic within view of a line. A father may be talking to locomotive or station staff as his son looks on inquisitively. Railwaymen may be watching proudly in an engine shed, as their powerful iron steed leaves for duty or roars past on a nearby line. Passengers may be waiting for the next train, exiting or boarding a standing train or just conversing. My instinct tells me that Don invites you to be part of his painting. When he captures a steam train on canvas it never totally dominates the picture; it is an integral part, just like a leading actor in a film. Whether he paints a main line express or a small local train on a rural branch line, Don will find the perfect aspect to paint it.

The two pictures I have chosen today reflect the descriptions above. They are both wooden puzzles of ~240 pieces, expertly cut, but by whom is a mystery. They are part of a series purchased privately on the Internet.

The first picture shows a jigsaw replicating the Breckon painting Sunday Working, also the jigsaw title. A Great Western Railway (GWR) 'Grange' class 4-6-0 locomotive of Charles Collett, No.6861 Crynant Grange, is shown heading a Sunday passenger service past a group of admiring railway workers. The title of the jigsaw relates  to the train and the railwaymen, possibly on 'overtime'. 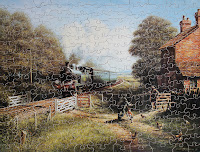 Picture number two from the Breckon painting Morning Delivery, features a small 0-4-4T tank locomotive, No.1521 of the Southern Railway (SR), designed by  Harry Wainwright. The loco is heading a couple of SR green coaches past a cottage in the English countryside. Outside the cottage a postman leans against his bicycle as he chats to the cottage owner.The engine driver leans out of his cab perhaps to shout "good morning" as his train trundles past. The title of both the painting and the jigsaw relates strongly to the train and the two male subjects. The chickens add further rural interest.
Posted by David at 22:06

The first photograph shows a jigsaw of 400 pieces made by Good Companion. There is a lot going on in this puzzle, titled Euston Station. The streamlined 'Coronation Scot' express train, in blue and white livery (including matching coaches) is the focal point. This famous Euston -  Glasgow express, was named to coincide with the year of the Coronation of King George VI. It was headed, initially, by Stanier 'Coronation' class 4-6-2, No.6220 Coronation, and a record speed of 114mph was achieved on the inaugural 'Press' run on 29th June 1937. Euston Station at Euston Grove was opened in 1937 and extended in 1846. The Great Hall was opened three years later. The London to Birmingham line took five years to build and impressive Doric Arches were built over the approaches to both Euston and Birmingham Curzon Street Stations. The original choice for the London Terminus had been Camden, but this was changed, later, to Euston. Also in the picture is 'Royal Scot' class 4-6-0 No.6110 Grenadier Guardsman, one of a class of locomotives introduced in 1927 by Henry Fowler. They were completely rebuilt later by a Stanier /Ivatt/ Cox  partnership. In addition to five trains and two locomotives, also included in the jigsaw picture are clock, passengers, porters, newspaper stand and platform numbers.

The second jigsaw picture shows the least expensive puzzle in my collection. It was purchased from ebay in 1998 and cost just £1.22, inclusive of postage; the postage alone would cost more the £1.22 these days. The 200-piece puzzle by JR Puzzles shows the LMS, 'Crimson Lake'  liveried 4-6-0  'Jubilee' class locomotive, No.5690 Leander, also the title of the puzzle. The 191 'Jubilee' class locomotives were built between 1934 and 1936, designed by (Sir) William Stanier - four are preserved, including Leander.
Posted by David at 16:21

As the title suggests, two pictures of Great Western Railway (GWR) locomotives feature in today's post, 4th January 2011, a 'Castle' and a 'King'. Both designed by Charles Collett the locomotives were quite similar in many respects with the 'King' being often described as a 'Super Castle'. In my collection of over 400 jigsaw puzzles, all featuring British steam trains, the GWR  and Western Region of British Railways combined, provide the subjects for more jigsaw puzzles than other regional equivalents.

The first picture shows a jigsaw titled Earl Bathurst Weathering The Storm.  The Wentworth wooden puzzle of 250 pieces is reproduced from a photograph of 'Castle' class 4-6-0, No.5051 Earl Bathurst, battling against a blizzard in a rural location. The photographer is not named. Because of the extreme weather conditions the colour photograph has almost been transformed into  monochrome.

The icon of the GWR, 'King' class 4-6-0, No.6000 King George V, is shown in the second picture. The engine is liveried in British Railways (BR) express blue, the colour chosen for large, passenger express locomotives after BR was formed in 1948. Unfortunately, the jigsaw picture, from original artwork by T. E. North, was printed with a red cast resulting in a purple locomotive and red bridge components. 'Cornish Riviera Express' is the title of this 400-piece jigsaw from Family Favourite. The famous express is pictured exiting the Royal Albert Bridge spanning the River Tamar at Saltash. The bridge designer was the great Isambard Kingdom Brunel and it was officially opened on 2nd May 1859 by Prince Albert; Brunel died four months later.
Posted by David at 17:07