Three from the Southern Railway

The 'Schools' or 'V' class 4-4-0 locomotive pictured first, is No.926 Repton, (built in 1934); the jigsaw puzzle is a 350-piece example from Castile. The locomotive is preserved on the North Yorkshire Moors Railway (NYMR) but currently under repair - see the photograph at the end of this post. The class of 40 entered service between 1930-35 under the control of Chief Mechanical Engineer of the Southern Railway, Richard Maunsell; they were named after public schools. The artist is not named unfortunately. Many pictures of the engine can be found on the Internet.

The second picture features a 'Lord Nelson' class 4-6-0 titled SR Lord Nelson Class 4-6-0 No 864 Sir Martin Frobisher (built 1929); it is part of the 500-piece, multi-series Age of Steam jigsaws from Arrow. The locomotive was one of sixteen, built for the Southern Railway between 1926-29, by Richard Maunsell. George Heiron was the artist. In the picture the coaches are Pullman examples thus the train is probably a 'Boat Train' such as the 'Golden Arrow'. The latter was hauled regularly by the 'Lord Nelson' class locomotives until superceded by the more powerful 4-6-2s of Oliver Bulleid.

A 'S15' class 4-6-0 of Richard Maunsell again, (originals built by W. Urie for the London & South Western Railway from 1920) is shown in the final picture of a 300-piece jigsaw from manufacturer Falcon titled The East Anglian. The class of 45 were built in three batches with the final example entering service in 1936. The photograph of No.841 is a little confusing but with the help of Dave Peel's brilliant book Locomotive Headboards - The Complete Story I'll try and explain. The headboard in the photograph 'The East Anglian' (with definite article) was introduced c1951 but the locomotive was withdrawn from service in 1964. If genuine in context, this places the jigsaw photograph between 1951 and 1964. However, the locomotive was only named Greene King after being rescued from Barry Scrapyard in 1972 so the photograph cannot be placed within those dates. The photograph must be of a special train operated in the preservation era as 'The East Anglian'. Many pictures of the locomotive can be found on the Internet. The engine is based on the NYMR but rumours persist that parts of the locomotive are used to keep 'S15' compatriot No.825 in operation. Hence, the future for No.841 is bleak. 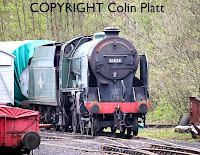 Just for interest this photograph of No.826 Repton was taken in April 2014 by my brother and shows the engine in its current state, awaiting maintenance at Grosmont on the North Yorkshire Moors Railway (NYMR). Following nationalisation in 1948, the locomotive was re-numbered 30926.

Giants of the Track

Compared with my previous post, two' leviathans' of the track are featured in jigsaws depicted in today's post, 19th August 2014. The locomotives are pictured in pre and post British Railways (1948) days, respectively. The London & North Eastern Railway and London Midland Region are represented.

The first photograph (left) shows a 500-piece jigsaw from the Arrow Age of Steam multi-series depicting Class 'P2' 2-8-2 No.2004 Mons Meg. The artist was George Heiron. The locomotive is portrayed in typical LNER livery, pre 1948: the  class designer was the famous engineer (Sir) Nigel Gresley. The powerful  class of six locomotives was introduced onto the LNER between 1934 and 1936. They were designed to negotiate the harsh terrain between Edinburgh and Aberdeen to eliminate the use of double-heading, smaller locomotives on Kings Cross - Aberdeen expresses. Because of their size and weight however, they also damaged the track on occasions and were withdrawn from service in 1944. The coaches in the painting are the famous Gresley teak examples. These huge locomotives were re-built by Gresley's successor Edward Thompson as 4-6-2 locomotives, class 'A2/2', much to the displeasure of LNER aficionados.

The second picture features a 500-piece jigsaw from JR Puzzles (now marketed by JHG Puzzles of Salisbury) from the Age of Steam series of four jigsaws. The locomotive is 'Princess Royal' class 4-6-2, No.46208 Princess Helena Victoria of the London Midland Region of British Railways, although she originated as part of a class of thirteen built between 1933-35 during the London Midland & Scottish Railway era. The designer was (Sir) William Stanier, Chief Mechanical Engineer of the LMS. The locomotive is pictured heading the 'Merseyside Express' (Euston - Liverpool Lime Street) in British Railways days (post 1948) wearing her original LMS livery. I am not sure of the location in the Edgar Hodges' painting but this express was a firm favourite with many artists, particularly as it negotiated the gradient through the long cutting from Liverpool Lime street to Edge Hill stations. The early BR 'cycling lion' motif on the tender in the painting, represents a context date c1948-56. The main Scottish expresses out of Euston such as the 'Royal Scot', were often headed by engines from the class.
Posted by David at 11:33

Up first is a 400-piece jigsaw from Whitman titled Festiniog Railway. The jigsaw photograph features a passenger service passing through the glorious Snowdonia National park. The Ffestiniog Railway was saved from dereliction in 1952 and officially re-opened as a commercial venture in 1982. For more historical details about this narrow gauge railway look up the previous post of 20th May 2014. The jigsaw is one of a series of six titled The Great Little Trains of Wales made by Philmar.

The second picture features another jigsaw from the same Philmar series, the Llanberis Lake Railway.  The narrow gauge railway runs for 2.5 miles from Gilfach Ddu Station Llanberis, to Pen Llyn, along the northern shore of Lyn Padarn in Snowdonia. Trains run from Easter until September. The little red locomotive in the jigsaw photograph is a Hunslet 0-4-0 saddle tank type built in 1889, and named Elidir. The latter was originally built for working the Dinorwic Quarry and named Enid; she was re-named Red Damsel later.

The Talyllyn Railway Wales is the title of the next jigsaw, a 320-piece example from Tower Press under the 'Mallard' brand. The Talyllyn Railway was built in 1864 to carry slate from Bryn Eglwys quarry to Tywyn where it was distributed via the main line. The railway closed in 1946 following a serious rock fall but was re-opened by the Talyllyn Railway Preservation Society in 1951 and became the world's first preserved railway. The jigsaw photograph includes a small locomotive No.1 Talyllyn, taking on water, possibly at Dalgoch Falls. The background comprises rhododendron bushes in full bloom and several passengers, in summer clothes, waiting to board the train.
Posted by David at 23:16