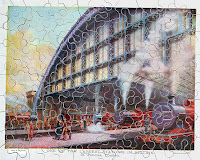 The first shows a 150-piece wooden jigsaw puzzle titled St Pancras, part of a 'GLEVUM' SERIES of puzzles. According to the Glevum Games website "Glevum Games was the principle trade name used by a firm established in Gloucester in 1894 by Harry Owen Roberts and his younger brother John Owen Roberts. Roberts Bros manufactured a vast range of products at their factory in Upton Street, Gloucester. The factory was built in 1902 and provided state-of-the-art workplace for the worforce of up to about 700 employees........". The company manufactured a huge range toys and games and some of the latter are often available on Ebay. A book about the company was published in 2003. The St Pancras jigsaw puzzle features several Midland 'Compound', 4-4-0 steam locomotives designed originally by Samuel Waite Johnson and updated by Richard Deeley. The locomotives/trains are static in the station with passengers and station staff prominent also.

The majestic St Pancras Station was completed for the Midland Railway (MR) in 1868. The railway had secured an Act of Parliament for the station five years previously - the site was adjacent to the Great Northern Railway’s Kings Cross Station. Before the new station was built the MR was using other London stations, particularly Euston, but had built its own London line from Bedford for the opening of St Pancras; the MR had become disillusioned with constant delays on lines into Euston. The 243ft span was exceptional for an interior and covered the magnificent trainshed of engineer William Barlow - the world’s largest enclosed space.

The second picture shows a 500-piece jigsaw from Waddingtons titled Waterloo Station. Helen Madeleine McKie painted two posters for the Southern Railway in 1948 to commemorate the Centenary of the opening of the rebuilt Waterloo Station. Britain in the grip of war is contrasted with the station in peacetime in the two posters. The posters show hundreds of busy passengers in exactly the same positions and poses in each, but with clothing and roles changed to match the time. The distinction between red tunics and khaki uniforms of the guardsmen in both posters is particularly interesting as is the wartime camouflage and post war decor of the station. The jigsaw replicates the peacetime poster.

Waterloo Station was opened by the London & South Western Railway in 1848 as Waterloo Bridge Station comprising just four platforms and six tracks. It was built on an extension from Nine Elms Station which was the L&SWR London terminus. The station was extended in 1860, 1878 and 1885. In 1886 it was named Waterloo Station but the three earlier extensions had ceated total chaos for passengers resulting from eighteen platforms and only ten platform numbers. The terminus was completely rebuilt by the same railway company between 1900 and 1922 into a new, twenty-one platform station, opened by Queen Mary on 21st March 1922.
Posted by David at 13:48

Three from Arrow and Terence Cuneo

Today's post, 5th April 2013, comprises three pictures of jigsaw puzzles replicating the artwork of Terence Cuneo. The trio were made by Arrow, one of the huge manufacturers of the 1960's/70's.
Many of Cuneo's paintings were the result of commissions and his portfolio of  subject material was immense. However, he is probably most famous for his railway paintings which are highly sought after by collectors. Several of his paintings were commissioned by the model railway companies Tri-ang and Hornby for use in catalogues, leaflets etc including the three that are pictured below. 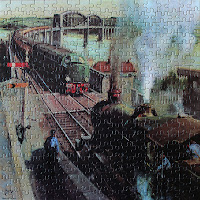 Picture number one shows the first of three 320-piece puzzles from Arrow, this one titled Class 4 Diesel-electric at Saltash (later designated as class 40). This painting was used on the 1963 Triang catalogue. A class 4 diesel- electric locomotive is shown heading a main line express across the famous, single line bridge while a 'Grange' class 4-6-0 steam locomotive waits to cross in the opposite direction. 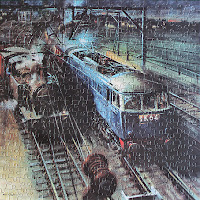 The second puzzle is titled Night Scene at Crewe. This painting was used on the front of the Triang-Railways - Hornby Dublo leaflet describing their amalgamation in 1965 and again on the Triang Hornby catalogue of the following year. In his book The Railway Paintings of Terence Cuneo the artist titles this painting Voltage versus Steam. Shown in contrast to each other are a small, steam tank locomotive and a class 'AL5' electric locomotive E3077, later re-numbered 85022, heading a speeding express. 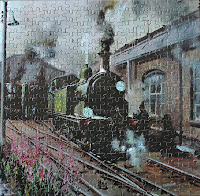 The third jigsaw of 320-pieces is titled M7 at Stratford.  Arrow was owned by Lines Brothers who also owned Triang Hornby and the jigsaw manufacturer marketed this third puzzle with the other two as a short series or set. Hornby Railways continued to use Cuneo paintings for catalogues, leaflets etc into the 1970's. The small class 'M7' 0-4-4 tank locomotive No.245 is pictured standing outside Stratford Works. This ex Southern Railway locomotive is part of the National Collection in York and was originally built for the London & South Western Railway.
Posted by David at 23:52