This post (30th December 2010) focuses on two of the 75 or so UK Heritage Railways - The Bluebell  Railway and the East Somerset Railway. Whitman covered many such railways during the 60's and 70's with their 400-piece 'Steam Railways' series. There were three 'Steam Railways' series, (7414, 7525 and 7714) each of four puzzles, all reproducing photographs of variable quality. Also collectible is the 'Great Little Trains of Wales' series (7695) of six, 400-piece puzzles.

The first photograph depicts a Whitman jigsaw titled 'East Somerset Railway',  showing one of the engines purchased by artist David Shepherd.  BR Standard class 4, No.75029, which he named  The Green Knight is the one in the pic, the other was giant 2-10-0 class 9F, 92203, which he named Black Prince. David purchased Cranmore Station and a small section of railway line in 1972 on which to house and run his two locomotives; thus, the East Somerset Railway was born. The ESR is a small railway of around three miles between Cranmore and Medip Vale and around five steam locos are operated by the railway.

The second photograph features another Whitman puzzle 'The Bluebell Railway Limited' showing a short train on the Bluebell Railway in Sussex. This railway boasts that it was the first preserved, standard gauge, steam operated passenger railway in the world; the first train ran in 1960. The line is approximately 9 miles long with stations at Sheffield Park, Horsted Keynes and Kingscote. Depicted is the ex South East & Chatham Railway 0-6-0, C-class locomotive No.592,  built in 1902, one of 30+ steam locomotives operated on the railway.
Posted by David at 19:55

An excellent jigsaw puzzle depicting an early broad gauge locomotive is the 500-piece example from Country House Treasures, produced for the Science Museum, London. It is titled Iron Duke at Chippenham 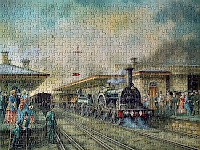 c1850 and is reproduced from a 1984 watercolour, by artist Sean Bolan.

Isambard Kingdom Brunel built the original Great Western Railway to the broad gauge of 7ft 1/4ins after convincing his board of directors that the wider gauge would offer greater speed, efficiency, stability and safety. The GWR was opened in stages from 1838, the Chippenham to Bath stage, in 1841. Iron Duke was the first member of a class of 29 remarkable locomotives all of 4-2-2 wheel formation. Designed by Daniel Gooch they were the epitome of power and speed on the GWR for many years. The smaller gauge, 4ft 8 1/2ins, as adopted by George Stephenson, eventually proved to be more popular than the broader gauge. With over eight times the mileage, the smaller gauge became standard from 1845, as a result of a Royal Commission investigation. The latter ackowledged the superiority of the broad gauge in most aspects of travel, but had to bow to the waggonway standard, originating in north-east mines, adopted by many other railways.  The Gauge Act was passed by Parliament a year later. The GWR ran dual gauge in places for a time but the last broad gauge track was lifted in 1892.
Posted by David at 14:47

In the hands of an expert artist a painting of surreal ambience and drama can result from the absence of sunlight in a railway scene. Accentuated highlights, reflections and ghostly shadows resulting from artificial light sources and traces of moonlight combine to produce that all important quality, called impact.
Malcolm Root's Duchess of the Night - available in various sizes and corresponding n

umbers of wooden pieces from Wentworth - is a typical example with impact to spare. The 500-piece version is featured in pic number one. The locomotive is a LMS 'Princess Coronation' class No. 6233, Duchess of Sutherland, without smoke deflectors ('blinkers' as we used to call them in the halcyon days, were added from 1945). She is shown in a shed setting at twilight, in a cold, smoky atmosphere, and the qualities previously described are inherent in the picture. Little is lost in the transfer of engine shed atmosphere to canvas, and finally, to jigsaw puzzle. The 'Coronation Scot' in blue livery, is just visible, lurking in the background.

The second picture also shows a Wentworth wooden jigsaw of 500 pieces and Malcolm Root is, again, the artist involved. The title is the The 'Duke' and the Clan. Two BR Standard creations of R.A. Riddles are pictured in the coaling plant at Carlisle Kingmoor (shed 12A), class 8, 'Pacific' No.71000, Duke of Gloucester and class 6, 'Pacific' No.72001, Clan Cameron. Only in preservation, following rectification of design inadequacies, has 'The Duke' lived up to the hype that preceded its inaugural run in 1954. The original painting has translated well into an impressive jigsaw.
Specially shaped pieces or 'whimsies', a feature of Wentworth wooden jigsaws, can be seen in both puzzles.
Posted by David at 18:07

In the November 13th post I featured three small jigsaw puzzles. I described them as puzzles produced with children in mind, even though they would enhance any adult steam railway jigsaw collection. They, and others like them, certainly enhance my own collection.
This post (14th December 2010) comprises two more pictures of smaller jigsaw puzzles although they are not str

Pic number one shows an excellent puzzle, of unknown origin, titled Trains and Engines. It was advertised as both a cut out toy and a jigsaw puzzle and comprises 72 pieces. Eight types of steam train, a station, a water tank, a signal box and a coloured lights signal can be separated from 60, semi-interlocking pieces. The 12, separated pieces can be used as stand-alone models and wooden bases are provided for this purpose.
A not dissimilar puzzle is the rare Waddington's Quiz Teaching Jigsaw of 1963, shown in pic

number two. It comprises eight, separate locomotive puzzles each of between 6 and 12 pieces. Each locomotive is numbered (1-8) but identifying clues, numbers and names for instance, are absent from the designs. Written clues to help identify the class and name (if any) of each locomotive are described on the box. Locomotives ranging from one of the first, Rocket, to the last, Evening Star, are included. An American 'Wild West' wood burner and a 'Western' diesel hydraulic are also featured, with four other British engines.
Posted by David at 16:18

The Valentine Company was set up in 1851 by James Valentine in Dundee and became Scotland's most prominent photographic company. Using pictures from in-house artists and photographers, the company produced postcards at the turn of the 19th and 20th centuries. Greetings cards and calendars followed on but it was the mid 1930's before jigsaw production began. The cutting of Valentine's wooden puzzles is difficult to research but like so many other printing companies at the time, this task may have been outsourced. Waddingtons took over the company in 1963 and sold it on to Hallmark Cards of the USA in 1980. The Dundee premises finally closed in 1993. 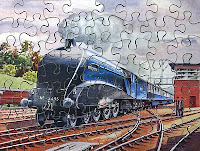 In this post (8th December 2010), I have included two photographs of Valentine's wooden jigsaws from my collection. Strangely, both are untitled, although superbly boxed. I will show a picture of a third Valentine's puzzle from my collection, in a future post.
The first pic shows a 60-piece puzzle from an Alan Anderson painting, featuring an interesting 'Streak'. Gresley 'A4' class No.4495 is shown liveried in 'Garter Blue'. Apparently when this locomotive emerged in 1937 it was painted in 'Apple Green' but was returned to Doncaster almost immediatley to be repainted in 'Garter Blue' to match the coaching stock of a special, new express. The original name of Great Snipe was also changed to Golden Fleece. The engine was one of two chosen to

head the train to be named the 'West Riding Limited'. The latter was originated at the behest of Yorkshire woollen merchants so that they could quickly access the London Wool Exchange, and return in a single day; hence the change of locomotive name. The express ran Bradford & Leeds to Kings Cross and return, and a special poster was produced by the LNER.
Pic number two is far easier to 'read'. BR class 'A4', No.60034 Lord Faringdon, in 'BR Blue' livery is shown heading BR 'blood and custard' coaches, exiting Kings Cross for the East Coast Main Line. The puzzle comprises 180 pieces and is reproduced from an original T.E. North painting.
I am receiving one or two comments (mostly positive) about the blog but I cannot reply unless you email me directly at the address at the top of the blog. If you wish to receive a reply or even converse with me please email me.
Posted by David at 20:25

The Photochrom Company of Tunbridge Wells and London features in today's post (4th December 2010). Postcard production was the main outlet for this printing company from the turn of the 19th/20th centuries. Fine quality wooden jigsaws followed later. The company operated the Photochrom process - invented in the 1880's by Hans Jakob Schmid - under licence from the Swiss company, Photochrom Zurich. Production also included railway posters and travel guides.
The starting date for jigsaw production is unknown to me but I have several titles of puzzles depicting steam railways in my inventory. Just one, unfortunately, enhances my collection, a 160-piece example titled L.N.E.R High Pressure Compound Engine No. 10000. It is described as an interlocking colour puzzle de luxe but in truth looks like a monochrome photograph with a small amount of colour added. It is shown in the accompanying picture.
No. 10000 was

the number attributed to a Gresley, class 'W1' experimental locomotive, of 4-6-4 wheel configuration (technically 4-6-2-2). It became known as the "Hush Hush" locomotive because of the extreme security bestowed on its development phases. It was fitted with a high pressure water tube boiler and was completed at Darlington Works in 1929. I must admit that this was an extremely handsome locomotive but because of many problems, complete rebuilding was required from 1936. She re-entered service a year later. As a result she boasted a conventional boiler, and streamlining similar to the class 'A4s'; her 4-6-4 wheel configuration remained, however. Her BR number was 60700 and she was finally withdrawn from service in 1959.
Posted by David at 18:09