Three more pictures for today all duplicating jigsaws from my collection of over 370.

The first is a photograph of a 400-piece puzzle by Kolorbax from a B. A. Osborne original painting. 'Merchant Navy' class 'Pacific' No.21C1  Channel Packet is shown heading the prestigeous 'Golden Arrow' express of Pullman coaches. An aeroplane is included in the picture and lineside engineers add human interest. This artwork has also been reproduced in wood, by jigsaw manufacturer Victory.

A superb painting by Don Breckon, Meeting The Train, is replicated as a jigsaw in my third pic. This is a truly memorable puzzle to assemble, offering many pictorial snapshots in its very simple composition. In the jigsaw a small GWR 0-4-2T tank engine, No.1401 hauls two, small chocolate and cream liveried passenger carriages on a snow-covered single line. The train has just left a small Halt (visible in the background). On an adjacent footpath children are using a sled to transport some luggage, possibly for an elderly relative or friend struggling behind in ankle deep snow. The puzzle is one of an excellent  series of four by Waddingtons and comprises 500 pieces. The series, issued in 1989, is titled Great Western Railway and all four reproduce Don Breckon's paintings.

This, my second post, comprises three photographs of jigsaw puzzles from my collection, all made by different British manufacturers.


Considering that Wentworth was only formed in 1994 global recognition of the company's wooden jigsaw puzzles, including 'whimsies', has been achieved in a short period of time. Examples depicting steam trains feature strongly in Wentworth's portfolio, all of them, made from wood. They exceed 70 in my invent

ory. Original paintings from several famous railway artists including Terence Cuneo, Barry Freeman and Malcolm Root have been used by the company. My first photograph is of a 250-piece jigsaw showing a rebuilt 'Royal Scot' class 4-6-0, 46108 Seaforth Highlander, heading maroon passenger coaches through Hartford Station in Cheshire; the artist is Malcolm Root. The jigsaw is also titled Seaforth Highlander.

The jigsaw in the second picture features Flying Scotsman - bo

th locomotive and named train. The 200-piece puzzle in my collection, another wooden example from Chad Valley, is contained in its original pink box. The vertical format puzzle is unusual and includes the following legend "The "Flying Scotsman" runs non-stop from London to Edinburgh, the longest non-stop journey in the world."

The final photograph in this post depicts an example from Good Companion; the latter is possibly connected to the Tower Press Company*. The 400-piece puzzle is titled The Irish Mail. A Hughes/Fowler 2-6-0, locomotive, 42758, (known as a 'Crab') is shown hauling the train past Conway Castle in North Wales. The Irish Mail, the oldest named train in the world, began running in 1848 between Euston and Holyhead. The Good Companion range of puzzles included at least twenty-one examples featuring steam trains.

* Many identical jigsaws are produced under both brand names.

Welcome to my blog, Steam Trains and Jigsaw Puzzles. Its origin is simple - my train spotting youth has been synchronised with a later interest in jigsaw puzzles. The experience is expensive - I have nearly 400 examples, depicting steam trains, in my collection. The conclusion is impossible - there are over 700 titles in my inventory and they are being supplemented annually. I wish to share my experiences, knowledge and jigsaw photographs with fellow collectors, and anyone else with an interest in steam railways and/or jigsaw puzzles. People with fond memories and remeniscences of steam railway travel may also find the blog of some interest.

My passion for steam locomotives began in the late 1950's when, like thousands of other male teenagers, I travelled many miles on British Railways in search of those elusive numbers and names. Collecting steam train jigsaw puzzles never really entered my head in those halcyon days. This particular passion began in the late 1990's, roughly 30 years after the demise of mainstream steam locomotion in the UK. In the Wilkinson's store in St Helens I came across a range of eight, 500-piece jigsaw puzzles, made by a company called 'JR Puzzles'. They replicated marvellous illustrations of steam trains and I assembled them, very quickly, after purchasing all of eight of them. Shortly afterwards, I bought more examples from the same store - I had caught the 'bug'. Since then I have trawled the Internet and visited many retail outlets in my quest for more puzzles. Ebay, in particular, has been the major source for jigsaws - used, unused or new - but other collectors have also contributed. My current collection of UK steam railway jigsaw puzzles stands at nearly 400 different examples from over 80 manufacturers/retailers, but my inventory stands at over 700; there is a long way to go.

When I complete a steam railway jigsaw in my collection I usually photograph it. On the blog today I have posted three of my photographs. The first, shows a puzzle reproducing an original painting from artist David Hey. David produced two paintings, both for jigsaw production, for the 'Rocket 150' celebrations at Rainhill in 1980. The puzzle in my collection and shown here depicts George Stephenson's Rocket; the second, which remains on my 'wants' list, depicts Lion. They were two locomotives that served the Liverpool and Manchester Railway with great distinction. The L&MR opened in 1830 following the famous Rainhill Trials of 1829, won by Rocket. I don't know the manufacturer's name but the 500-piece puzzles were sold in commemorative wrappers. 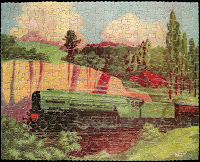 A wavy-edged, semi-interlocking jigsaw is shown next, a 400-piece example made by Mammoth in the 1930's. The powerful Gresley 2-8-2 locomotive Cock o' the North (also the name of the jigsaw) is featured powering through a green and sandstone landscape heading teak passenger coaches. I cannot decipher the artist's name.

The third and final picture depicts a 175-piece, wooden puzzle made by Chad Valley for the Publicity Department of the Great Western Railway Company. The puzzle, issued between 1934-1939, is called Locomotives Old and New and features two icons of the Great Western Railway, Lord of the Isles (one of Brunel's broad gauge locomotives, designed by Daniel Gooch) and King George V, one of Charles Collett's giant 4-6-0s.
Posted by David at 10:32