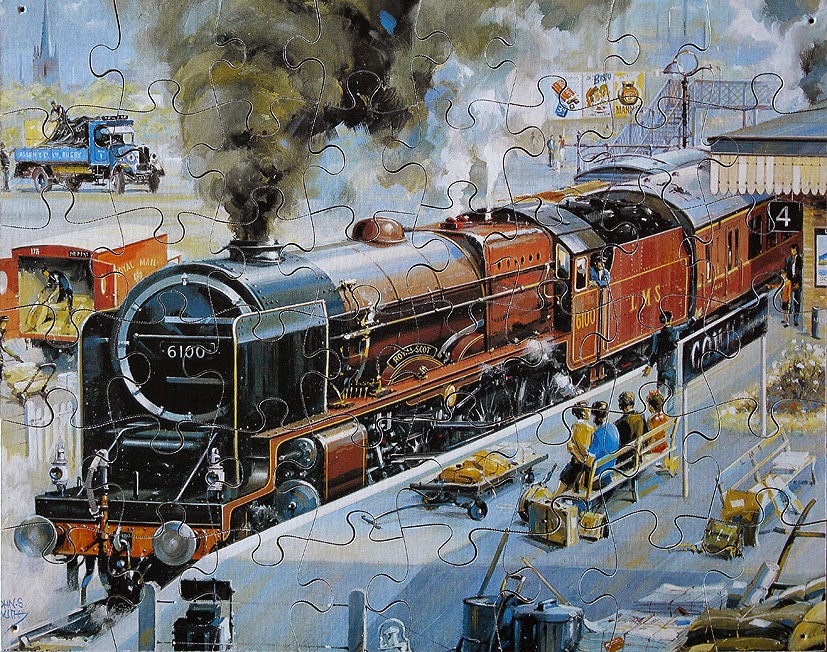 The first photograph shows a jigsaw of a 'Royal Scot' locomotive in a station setting with vintage commercial vehicles in the background. The class 'prototype' No.6100 Royal Scot  is shown in early guise with parallel boiler and full LMS red livery. The class of  4-6-0s emerged onto LMS metals (track) from 1927 and totalled 70 on completion. The 'locomotive' was sent to America in 1933 as a British exhibit at the Century of Progress Exposition in Chicago; in fact the locomotive sent was actually No.6152 The King's Dragoon Guardsman masquerading as No.6100 Royal Scot. No.6152 had been built later (1930) and was considered superior to the prototype. A complete train was sent to the States which toured America and Canada either side of the exhibition. The locomotive was returned to the UK with special commemorative plates positioned below the nameplates. The jigsaw is a recent 48-piece example from JL Templates  - www.jltemplates.co.uk and is regularly available on ebay.

This picture shows a rebuilt 'Royal Scot' locomotive as designed by (Sir) William Stanier, No.46112 Sherwood Forester. The jigsaw depicted is a 500-piece puzzle made by JR Puzzles from original artwork by Edgar Hodges. The 'Thames-Clyde Express' first ran in 1927 from London St Pancras to Glasgow St Enoch (Glasgow Central on closure of St Enoch in 1966) along the Settle & Carlisle, ex Midland Railway route. It was withdrawn for ten years from 1939, reinstated, and completely withdrawn in 1975.
Posted by David at 16:46

In today's post I am using two pics showing Great Western Railway locomotives as depicted on wooden jigsaw puzzles. One locomotive pictured is from the early days of the GWR and the other is preserved in the National Collection.

The broad gauge system of Isambard Kingdom Brunel and the Great Western Railway was unique. Brunel persuaded his GWR board that a wider gauge (7ft 0.25ins) than that currently in use (4ft 8.5ins) on the fledgling railway system, would afford greater flexibility towards the major objectives of speed, efficiency, safety and therefore, profitability. The line was started in 1835 and opened in stages between 1838 and 1841; it was built from both ends, London and Bristol. 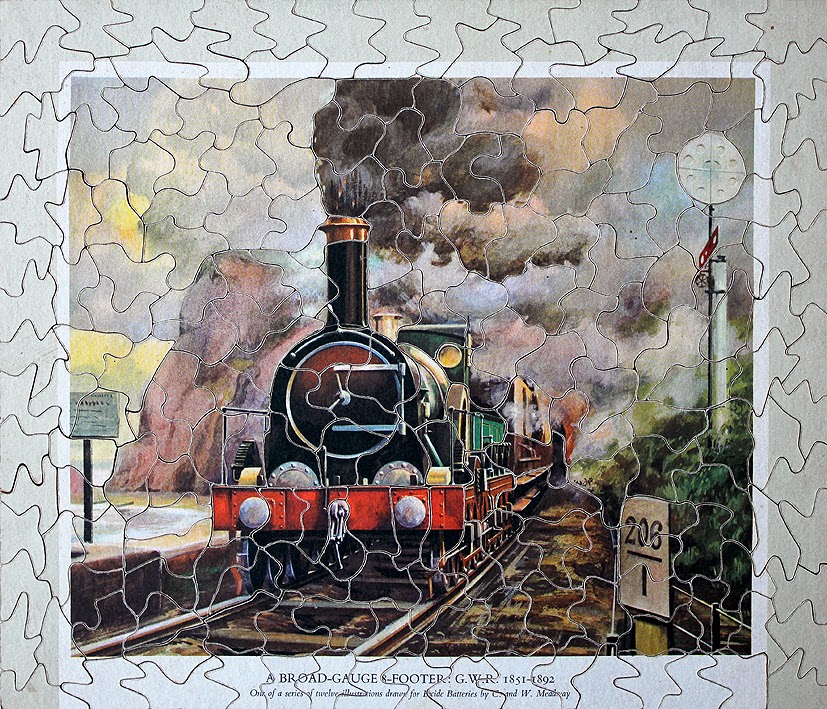 Broad-Gauge 8-Footer GWR 1851-1892 is one of four, plywood jigsaws showing early steam engines from a series made incredibly, for Exide Batteries. The legend along the base of each puzzle reads “one of the series of twelve illustrations drawn for Exide batteries by C. and W. Meadway”. The puzzles are of 190-200 pieces and semi interlocking. The locomotive in the jigsaw picture appears to be an example from the 'Iron Duke' class. Iron Duke was the first member of a class of twenty-nine GWR broad-gauge locomotives, all of 4-2-2 wheel formation, although for a short time from construction in 1846, Iron Duke itself was a 2-2-2 design. Designed by Daniel Gooch this famous class was the epitome of power and speed on the GWR for many years. ‘Iron Dukes’ were famous for their 8ft driving wheels and were introduced in April 1847. In 1848 class member Great Britain reached a speed of around 78mph near Swindon, a new speed record and a phenomenal achievement for the time.

If you know anything about the Exide batteries' puzzles please contact me - my email address is at the top of the blog. I know little about them. 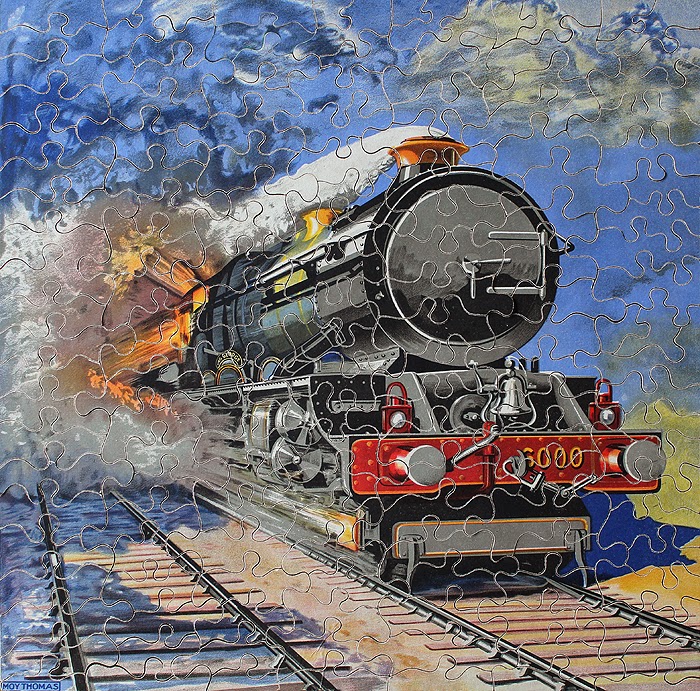 Britain's Mightiest, a 150-piece wooden puzzle from Chad Valley, depicts the icon of the GWR, Charles Collett's 'King' class 4-6-0 No.6000, King George V. The jigsaw picture is reproduced from a c1935 GWR poster by Moy Thomas.The ‘Kings’ were the heaviest (136tons) and most powerful 4-6-0s to operate in Britain and emerged from 1927. The first one, No. 6000, King George V was sent to the Baltimore and Ohio Centenary Railroad Celebrations in 1927 following its inaugural run hauling the ‘Cornish Riviera Express’. In recognition of its achievements the Americans presented a commemorative bell, seen clearly on the front buffer beam in Thomas's picture.
Posted by David at 14:47