Since the Wentworth company began manufacturing their famous wooden puzzles in 1994, steam train examples have been prominent. Over seventy titles have been produced, although many are no longer available. Of the two I have chosen to include in today's post, 25th February 2011, only the first is currently in production. More Wentworth puzzles have been included in previous posts - just type Wentworth in the search bar above.
My first pic shows the 250-piece puzzle Clouds and Crosswinds which is reproduced from a Malcolm Root original painting. One of William Stanier's magnificent 'Princess Coronation' class 4-6-2s, No.46238 City of Carlisle, is depicted hard at work on the northern West Coast Main Line (WCML) approaching the summit at Shap. Set in the late 1950's/early 1960's, Malcolm's picture highlights the bleak terrain, threatening skies and strong crosswinds.

The second pic features a famous express of the London Midland Scottish Railway, the 'Royal Scot'. One of Henry Fowler's 4-6-0 creations, later modified by William Stanier, is shown heading the famous express on the northern WCML, close to the location used by Malcolm Root for Clouds and Crosswinds. The 250-piece jigsaw replicates a Gerald Broom original painting, although it is not one of Wentworth's best reproductions. The title is LMS Royal Scot, Tebay Troughs and the pioneer locomotive of the class, No.6100 Royal Scot, is shown picking up water from the famous troughs. Large amounts of spray, characteristic of this type of operation, are used to advantage in the painting. The picture also features an early farming scene, including a horse and lots of manual  labour, typical of early LMS days.

Wentworth jigsaw puzzles are available in many different sizes.
Posted by David at 13:06

The Beginning, with JR

My passion for collecting jigsaw puzzles depicting steam trains began in the mid 1990's, roughly thirty years after my train spotting days ended. I came across a range of eight, 500-piece jigsaw puzzles in the Wilkinson's store in my home town, St Helens. They were in two series titled Nostalgia and Age of Steam, respectively,  and each series comprised four puzzles. They were made by a company called JR Puzzles and I felt compelled to collect them all, rediscovering my youth at the same time. The artist for all eight jigsaws was Edgar Hodges, his excellent illustrative paintings being ideal for reproduction as jigsaws. He was well known for signing his paintings with his surname only. Within a short time I had completed all eight puzzles plus a couple of others sold by the same store. I became obsessed with adding more and the collection started to expand.

In today's post (20th February 2011) I am including pictures of two of those original puzzles, both from the Nostalgia series. The first is Cornish Riviera Limited showing a giant 'King' class 4-6-0 locomotive, No.6019 King Henry V, at the head of this famous Paddington - Penzance express of the Great Western Railway. Another smaller 4-6-0 locomotive is travelling light engine on an adjacent line - possibly a 'Manor' class example. As usual, in Edgar Hodges' railway artwork, track maintenance men add human interest to the picture.

The second shot depicts British Railways 'Standard' class 4-6-2 locomotive, No.70004 William Shakespeare, heading the famous Southern Railway, 'Golden Arrow' service from London's Victoria Station to Dover. Track maintenance men are, once again, a feature. The 'Golden Arrow', all first class Pullman car service, began in 1929 (ordinary first and third class coaches were added in the early 1930's) but was terminated at the outbreak of World War II in 1939. It recommenced in 1946. Passengers were treated to a first class English Channel crossing from Dover to Calais on a specially refurbished ferry, Canterbury, owned by the  Southern Railway. At Calais passengers boarded an equally prestigious French train, the 'Fleche d'Or', for the journey to Paris. This French luxury Pullman service had started in 1926. 'Lord Nelson' and 'King Arthur' class locomotives were used on the 'Golden Arrow' initially, followed by Bullied 'Pacifics'; 'Britannia' class locomotives were also used until the steam-hauled service ended in 1961, when an electrified service took over.
Posted by David at 20:48

A steam train pictured with another mode of transport is a popular pairing with both artists and jigsaw manufacturers. The inclusion of any of the following - canal boats, veteran and vintage road vehicles, boats, bicycles/motorbikes or aeroplanes (occasionally) - within a steam train jigsaw picture - adds more pictorial interest. This post, 13th February 2011, includes two favourite examples from my collection.

Great Malvern, one of Gibsons' 636-piece panorama series, is reproduced from a fine painting by Eric Bottomley. An express headed by a Great Western Railway (GWR) 'Saint' class 4-6-0 of George Jackson Churchward waits in the station as a small branch line train approaches in the opposite direction. Two wonderful Morgan cars, a 1934 three-wheeled super sports beetleback, and a 1950 Plus-4 drophead coupe are parked in the adjoining station yard. The puzzle depicts two older examples of popular modes of transport gelled together into a wonderful image epitomising travel in early British Railways' days.

Another favourite of mine in this category is First of the Day, part of the Gibsons' Heritage series of both 500 and 1000 piece puzzles. This one is of 1000 pieces.  What a superb jigsaw from a Barry Freeman original canvas - a story book picture which is open to interpretation. A GWR 'Star' class 4-6-0 of George Jackson Churchward,  No.2902 Lady of the Lake, hauls a passenger express on a line adjacent to a canal where two, coal-bearing narrow boats are travelling in the opposite direction. A lone angler sits on the bank unhooking a fish. Has he just caught 'the first of the day', or is the train the 'first of the day' or are the boats the 'first of the day'.  My money is on the angler and his fish, but all three may qualify. They also appear to have been painted close to the first light of the day. The interpretation is open to the viewer.
At least two previous posts include puzzles which also show this classic pairing.
Posted by David at 18:32

A magnificent railway bridge is the focus of today's post (7th February 2011). I have chosen two different views of the bridge, as depicted on jigsaws in my collection.

One of the most famous bridges in the UK, the Forth Bridge, spanning the Firth of Forth in Scotland, is superbly captured in the 400-piece jigsaw by Good Companion. Titled simply, Forth Bridge,  the puzzle reproduces a T. E. North original painting illustrating the world's first, major steel bridge. Designed by Sir John Fowler and (Sir) Benjamin Baker, the huge structure is around 1.5 miles long and over 100 metres high; construction began in 1886. Local researchers estimate that 98 men were lost during its construction, much higher than the figure (57) reported on completion of the bridge. The official opening was performed by HRH The Prince of Wales, later King Edward VII, on 4th March 1890. The puzzle is shown in pic number one. A BR (ex LNER) express headed by a 4-6-2 'A2' class lcomotive, No.60525 A. H. Peppercorn,  is pictured traversing the bridge with a variety of boats and ships included on the river beneath. 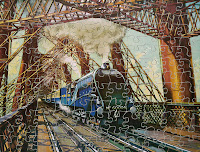 The 'listed' bridge is also featured in pic number two.  A Gresley 'A4' class 4-6-2, No.60004 William Whitelaw, (Great Snipe prior to 1941) in BR blue livery, is shown crossing the bridge heading BR blue and grey coaches. The puzzle, from manufacturer Victory, is of 125 pieces but it was available in other sizes. The artist's name is not shown on the jigsaw - perhaps it is a 'cropped' version of the original canvas.
Posted by David at 13:50

The British Railways (BR) period of 1948-1968 heralded a set of new, standard liveries for steam locomotives including Caledonian Blue, lined with black and white, for the larger express passenger examples. The livery was short-lived, on quality/cost grounds, and had been replaced with Brunswick Green on many locomotives by 1952.  Nevertheless, the blue livery was attractive, accepted by many enthusiasts and popular with railway artists. Two examples of locomotives in BR express blue livery are shown in today's post, (1st February 2011) pictured on jigsaw puzzles from Valentines and Good Companion. 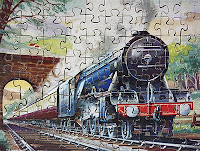 Picture number one shows a wooden puzzle of 80 pieces from Scottish manufacturer, Valentines. The picture is somewhat of an enigma, however, as a Gresley class 'A1' appears to be portrayed, in blue livery, with a Gresley class 'A4' number on the smokebox door. The BR number 60014 (LNER 2509) was attributed to 'A4' class locomotive Silver Link and not to an 'A1' (unless anyone can tell me otherwise). The picture shows the locomotive with a rake of BR carmine and cream coaches in a rural location. The artist is T.E. North.

A Good Companion jigsaw of 400 pieces is pictured next and is far easier to 'read' than the previous puzzle. The Fowler 'Royal Scot' class 4-6-0, No. 46132 The King's Regiment - Liverpool, is shown heading BR coaching stock. The train is exiting a tunnel in a rural setting, as favoured by some artists. The original artwork was by T. E. North.
Posted by David at 13:40