The 5-miles long K&WVR runs from Keighley to Oxenhope  along the Worth Valley in West Yorkshire. This post, 29th April 2016, comprises two photographs of jigsaw puzzles each featuring a scene from the K&WVR. 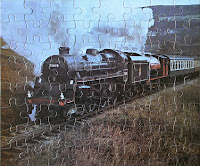 Picture one (left) shows a 100 piece puzzle from Hestair's Trains series, titled Keighley & Worth Valley Railway. The locomotive shown on a passenger service is ex LMS Ivatt class '2MT' 2-6-2T, No.41241. The loco is currently being rebuilt in the engine shed.

An ex BR 'Standard' class '4MT' 4-6-0 locomotive, No.75078, is featured in the next picture (right). This locomotive returned to steam in 2015 and is a current operator on the line. The jigsaw is a 64-piece example from Philmar's Steam Trains series,  titled Keighley & Worth Valley Railway. An unidentified saddle tank locomotive is behind No.75078, on the double-headed, passenger service. If you know the i.d. of this second loco please let me know.
Posted by David at 16:17

For those  of us who remember, a day trip to the seaside by steam train was a memorable experience. Travelling by rail to a holiday destination and returning home in similar fashion, was equally inspiring. This post, 13th April 2016, comprises two photographs of jigsaws perfectly depicting this nostalgia.

The first jigsaw shown, aptly titled Seaside Excursion, is a 1000-piece jigsaw from Gibsons Heritage series replicating a Malcolm Root painting of the same name. In the picture an Ivatt, class '2MT' 2-6-0 ('Mogul') locomotive, No.46469, is entering Halstead Station heading carmine and cream passenger coaches. The destination is an Essex coastal resort. A level crossing and signal box add to the railway scene which includes an Eastern National, Bristol K-type bus waiting at the crossing. A blue sky augurs well for the waiting passengers including, in the foreground, two children carrying buckets and spades, an obvious clue as to the purpose of the train journey.

The second picture features a Gibsons 636-piece 'Panoramic' jigsaw titled Seaside Train. In Derek Roberts's artwork an ex Midland Railway / ex LMS 0-6-0 'Jinty' tank locomotive, No.47272, is shown with a short passenger train standing in a small seaside station. The train has arrived through a short tunnel. The station is in very close proximity to the promenade, the weather is glorious and many people, including family groups, are present on the platform. Colourful summer clothes are the order of the day. The bay beyond is also busy with holidaymakers and the overall  atmosphere reflects joy and expectation. The station is not named but is it on the famous south west coast, perhaps?
Posted by David at 20:58