This post, 13th Dcember 2013, features two  pictures of jigsaws, each showing a Southern Railway 'Schools' class 'V' 4-4-0 locomotive, designed by Richard Maunsell. The 40 locomotives (built 1930-1935) in the class were the most powerful 4-4-0s ever built; all 40 were named after public boarding schools 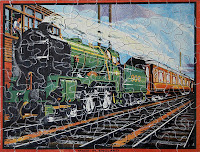 The picture on the left features the first member of the class, without smoke deflectors, No.900 Eton; the illustrative artwork is not signed. The locomotive is pictured heading a rake of Pullman coaches past a signal box. The immediate response to the painting is that it features a special boat train, although there is no headboard. My copy of the jigsaw was unfortunately purchased without a box, hence the puzzle's origin and title are not known to me. It is of approximately 75 pieces and possibly from the Philmar portfolio of wooden, railway jigsaws.

The second picture shows the Falcon 300-piece puzzle titled Stowe, also the name of the engine in the jigsaw picture. The locomotive portrayed showing her smoke deflectors is the 'Schools' class 'V,' No. 928, and she is being admired by a couple of railwaymen. The coaches in tow are Southern Railway green examples. The artwork was by Rob Johnson, the artist responsible for all four superb jigsaw pictures in the Falcon 300 series, and all covered in this blog.
Posted by David at 16:07