In my teenage days two locomotives heading a train, or double headers as they were called, always caused great excitement and optimism among train spotters for the obvious reason; they provided the possibilty of two 'cops' rather than one. This post (29th November 2010) is dedicated to jigsaws highlighting such pairings.

A superb puzzle shown in pic number one, is Double Header at Dainton, part of the Waddingtons' 500-piece Great Western Railway series of four jigsaws. All four puzzles replicate excellent Don Breckon original paintings. 'Grange' and 'King' class 4-6-0s of Charles Collett are pictured working hard on a severe incline hauling a seemingly endless rake of 'chocolate and cream', GWR carriages. Resting cyclists, mother and child possibly, and a small dog are watching intently from a wall. On the heavier trains such as the summer 'Cornish Riviera Express', a pilot locomotive, introduced at Newton Abbott, was often used to overcome Dainton and Rattery Summits.

Reproduced by Falcon from a George Hieron painting, Claughton Class - LMS was one of four puzzles that comprised a 300-piece Steamtrains series. Pic number two features this puzzle. Two of C. J. Bowen Cooke's locomotives are shown double heading a London & North Western Railway express. The pilot locomotive is No.5908 Alfred Fletcher, the second one is difficult to identify but is probably 5905 Ralph Brocklebank. The 'Claughton' class, introduced in 1913, comprised 131, large 4-6-0 express passenger engines. The first member of the class was named after the L&NWR chairman, Sir Gilbert Claughton.
Posted by David at 10:28

In this post (24th November 2010) I am concentrating on two jigsaw puzzles currently in production. Both jigsaws are of a similar style, not surprising as they replicate original paintings by the same artist, Ray Cresswell. The manufacturer is House of Puzzles, of Invergordon, and both puzzles are part of my steam train jigsaw collection of nearly 400 examples.

House of Puzzles produced a 250-piece jigsaw in 2008 as part of its Meadow Collection. It is titled Train Spotting and incorporates pieces larger than normal. The puzzle is aimed at older children, but because of the larger pieces, also at young and old with tactile or visual impairments. LNER class 'A1' (later 'A3') 4-6-2 locomotive, No.4472 Flying Scotsman, is featured heading the famous express of the same name. The picture also includes a boy admiring the passing express from a vantage point, high up, on a stone bridge. His dog is pictured running along a narrow station platform below, barking at the train. The location is very rural.

The second pic shows a puzzle of 1000 pieces from the Dalmore Collection, titled Train Now Standing. Nigel Gresley's famous locomotive No.4472, heading a train of the same name, is again to the fore, waiting at a station platform. What might be a LNER class 'O4' 4-8-0, of John Robinson, is passing on an adjacent line. There are lots of other interesting parts in a very busy picture including a post van and postman, guard, signal box, footbridge, and a boy taking a photograph of the steam loco's. The jigsaw was marketed in 2009.
Posted by David at 17:02

In this post (18th November 2010) the shape of steam railway jigsaw puzzles will be scrutinised.
The most popular size for a steam train jigsaw puzzles is either 500 or 1000-pieces and there is not much variation either in their shape. This, quite simply, is dictated by the outline of a steam engine or train. The rectangle, in the landscape format is, easily, the most common shape offered by manufacturers, both past and present. Some of Gibsons' puzzles are also offered in panoramic format, long and narrow rectangular puzzles of 636 pieces.
Vertical (portrait format) rectangles are much scarcer but have been used successfully by Victory and King International, for instance. The Silver Jubilee Train, a vertical, rectangular puzzle made by Victory, has been described in the post of 3rd August.
The circular shape is more difficult to find. Waddingtons and King produced highly collectible circular puzzles of 500 pieces, Steam Railways and Road meets Rail, respectively as described in the 10th August post. W. H. Smith also made a lovely circular puzzle of 500 pieces titled The Railway Crossing.

the shape of steam engines were marketed by Chad Valley. For two examples, Speed and King George V go to the post of 13th October. ‘Castle’ class 4-6-0 Caerphilly Castle, marketed in 1924 at a cost of 5/- (25p), was the first of this popular series made for the GWR Public Relations Department. The puzzle coincided with the display of the locomotive at the British Empire Exhibition in May of the same year. In June the price of the puzzle was reduced to 2/6d (12.5p). This puzzle is shown in pic number one.

The 100-piece jigsaw - ‘A3’ No.2501 Colombo - by Profile Publications Ltd., - was cut to the unusual but eye-catching shape of a long letterbox cut tightly around the side-on technical illustration of the locomotive and tender. The illustration is by Arthur Wolstenholme. This puzzle is shown in pic number two.

I will continue this theme in a future post. The latter will include a 3D puzzle and an example from which parts can be removed as separate 'toys'.
Posted by David at 07:29

From around 1939, Victory produced wooden steam railway jigsaw puzzles of 45-80 pieces, with children of all ages in mind. They were part of the Topical series and labelled TP0, TP1 and TP2. In addition, the Simple Picture Puzzle (SP) series comprised jigsaws of 8-12 pieces aimed at 2-4 year-olds; at least one of them featured a steam train. For 4-7 year-olds the Adventure series (c1956) of 45-70 extra large pieces also included a poster-style steam railway jigsaw. All five of the TT (Tiny Trains) series, TT1-TT5, of 45 pieces, depicted express trains. For this post (13th November 2010) I am using two pictures of children's jigsaw puzzles (but still collected by adults such as yours truly) made by Victory, and a third showing a Philmar equivalent. 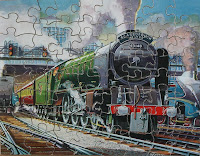 Picture one shows a Victory 64-piece puzzle from the TP1 series featuring the 'Scarborough Flyer' express train. It is a fine reproduction of a T. E. North painting. One of A. H. Peppercorn's 'A1' class locomotives No.60140 Balmoral, is pictured heading the express, flanked by Gresley 'A4' class locomotives. One of them is No.60007 Sir Nigel Gresley but I can't identify the other one. The express is exiting Kings Cross for its journey to the famous holiday destination on theYorkshire Coast.

The second picture shows another Victory jigsaw, featuring British Railways 'Standard' class '7' locomotive, No.70000 Britannia, from the TP0 series. This jigsaw, of 45 pieces, is reproduced from another T. E. North painting. The 55 members of the 'Britannia' class of 4-6-2 locomotives hit BR metals (track) between 1951 and 1954, under the supervision of Robert Riddles. The last of the class was retired in 1968. Two are preserved -No.70000 Britannia and No.70013 Oliver Cromwell. 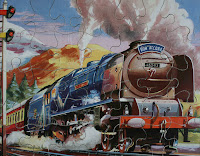 The third and final picture in this post features a Philmar jigsaw of just 35 pieces, titled 'Bon Acord'. This named train ran from Glasgow to Aberdeen. In the picture, (artist not known) the express is headed by a Stanier 'Princess Coronation' class '8P' 'Pacific' No. 46243 City of Lancaster, in BR blue livery. The class numbered 38 on completion but all had been retired by 1964. Three are preserved - No.6229 Duchess of Hamilton, No.6233 Duchess of Sutherland and No.6235 City of Birmingham. The puzzle is from the Famous Trains series of four, all depicting steam trains.
Posted by David at 18:17

There were many named trains in the halcyon days of steam including legendary examples such as the following: 'Royal Scot', 'Golden Arrow' 'Cornish Riviera Express' and 'Flying Scotsman'. These and other famous trains are well represented in steam railway jigsaw puzzles. However, in this post, I am using three photographs depicting less familiar named trains.

The first pic shows the 'East Anglian' express. Titled East Anglian to Norwich, it is a wooden jigsaw of 55 pieces reproduced from a Roland Davies painting. As I purchased this puzzle without a box, I have no idea of the manufacturer. If you can help, please let me know. The 'East Anglian' ran from London's Liverpool Street Station to Norwich. The locomotive in the picture is an unidentified, but named, 4-6-0.

Pic number two shows the luxurious 'Devon Belle' express hauled by an Oliver Bulleid, 4-6-2 'Merchant Navy' class locomotive, No.21C4 White Star Line. Simply titled The Devon Belle SR, the puzzle is part of the 500-piece Steamtrains series made by Falcon. The 'Devon Belle' was a Pullman Car service operating from Waterloo to Exeter, where the train split - part for Plymouth, part for Ilfracombe. A special feature of the train was an observation car at the rear. The puzzle is reproduced from a George Heiron original canvas.

jigsaw produced by Good Companion, titled The Yorkshire Pullman. The crack express, involving splits and additions, linked the Yorkshire cities of Bradford, Harrogate, Leeds and Hull with London's Kings Cross. The jigsaw, from a T. E. North painting, shows the train headed by a Peppercorn 'A1' class locomotive, No.60136 Alcazar, passing another train headed by a Gresley 'A4' class locomotive, No. 60025 Falcon.
Posted by David at 10:54

One of the icons of the Great Western Railway was Charles Collett's giant 4-6-0, No. 6000 King George V. The locomotive has been the subject of many jigsaw puzzles especially from manufacturers Chad Valley and Victory. Chad Valley produced the locomotive in cut-out style as a 200-piece* or 300-piece puzzle, and in four other puzzles heading different trains - Britain's Mightiest, Locomotives Old and New*, Torbay Express and Royal Route to the West (it also appeared as a ghostly image in The Streamlined Way). *These two puzzles have been featured in previous posts.

In this post (4th November 2010) I am using two more pics of jigsaws featuring this famous locomotive (currently in the National Collection at the NRM, York). The first pic shows Royal Route to the West made by Chad Valley between 1933 and 1939. The locomotive is shown in GWR green livery heading a rake of GWR coaches towards the West Country. The jigsaw is a 150-piece example, reproduced from a 1929 G.H. Davies painting. The puzzle was also available with 200 pieces. 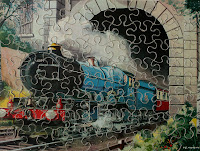 The second pic shows the locomotive, in BR blue livery, exiting a tunnel with a rake of BR carmine and cream passenger stock behind. This puzzle of approximately 70 pieces was made by Ponda. The original painting was by T.E. North.
Following successful trials heading the 'Cornish Riviera Express' in 1927, the locomotive was shipped to America to join the Centenary Celebrations of the Baltimore & Ohio Railroad. The trip was so successful that the engine returned to the UK with a commemorative bell and cabside medallions fitted by her American hosts. These fittings are clearly visible in both pics.
Posted by David at 15:19