The first picture features the first, LMS 'Princess Coronation' class 4-6-2 locomotive, No.6220 (BR 46220) Coronation, hauling the prestigious express, the 'Coronation Scot', of 1937. The latter Euston - Glasgow express established a new world record of 114mph during an early test run, headed by No.6220. The engine and coaches were streamlined and liveried in 'Caledonian' blue with matching silver lines, along each side. Malcolm Root's painting is titled Coronation Scot and the jigsaw of the same title is a 500-piece example from King International. It hurts a little for me to say this as a 100% GWR enthusiast, but this class of locomotives represents, for me, the best of British locomotive designs - immensely powerful and very fast. The class of 38, designed by Sir William Stanier (aided by his chief draughtsman) was built between 1937 and 1948 at Crewe Works. Only three members of the class are preserved.


The 'A4' class of 4-6-2 locomotives was designed by Sir Nigel Gresley to head the LNER’s crack expresses from 1935. No.4498 (BR 60007) Sir Nigel Gresley was the engineer's 100th 'Pacific' (4-6-2) locomotive built, and it was fitting that the loco was named after him. The class of 35 was built at Doncaster Works between 1935-38. They were designed specifically for the high-speed, streamlined expresses running from Kings Cross to Newcastle, Glasgow and Edinburgh; the 'Silver Jubilee' train was the first. Class member No.4468 (BR 60022) Mallard, still holds the world record of almost 126mph for a steam locomotive, achieved in 1938 on the downward section of Stoke Bank near Grantham. The jigsaw in the picture is a 300-piece example from Hope featuring No.4468 Sir Nigel Gresley, the title of the puzzle. Six members of the class are preserved, but two are overseas (USA and Canada). The jigsaw photograph shows the locomotive in preservation days.

I don't normally endorse any products in my posts but in this case I am making an exception. In my opinion steam railways and wildlife produce an irresistible combination and a current artist who is not represented in the jigsaw trade, to the best of my knowledge, has taken this combination to heart. Alan Ward paints steam railways and four such paintings of  Gresley ‘A4’ class locomotives, shown on his website, include associated examples of wildlife  - a golden eagle at nest, a pair of kingfishers, a fox with pheasant kill and flying mallards. The painting titles are Golden eagle in the Glens, Kingfisher Country, Quicksilver Fox and Mallard in flight, respectively and the specific locomotives featured are Golden Eagle, Kingfisher, Quicksilver and Mallard. The association between locomotive and painting is obvious in three examples but Quicksilver Fox is an example of artistic licence – the amalgamation of the locomotive name, Quicksilver and the fox. The four paintings would make a superb set of jigsaw puzzles, of great appeal to a wider public. To see these four paintings and other steam railway examples of Alan's go to www.alanwardcollection.co.uk

A Trio from The Works

The first jigsaw pictured is a 500-piece example titled Steam Train, Staverton Station. The locomotive depicted is one of 100, class '4575' 2-6-2 tank locomotives, No.5526. The wheel configuration is known as the 'Prairie' type. No.5526 was built in 1928, designed by Chief Mechanical Engineer of the Great Western Railway (GWR), Charles Collett. She is pictured on her home preserved railway, The South Devon Railway, at Staverton Station, in early British Railways (BR), 'cycling lion' livery.

The second jigsaw pictured is another 500-piece example, titled Paignton and Dartmouth Steam Train. The engine in the photograph is another of the '4575' class 'Prairie' tanks, No.4588, built in 1927. The locomotive, in early Great Western livery, is heading a passenger service with a 'Devon Belle' observation coach immediately behind the locomotive. The picturesque backdrop shows a host of sailing craft at Dartmouth (?).

The locomotive in the third jigsaw picture is the 'Old Lady' of the GWR, No.3440 City of Truro. This icon of the steam era was built in 1903, one of ten 'City' class 4-4-0 locomotives, designed by William Dean and modified by George Jackson Churchward. The jigsaw is another 500-piece example but it differs from the previous two as it is of the portrait format. The puzzle is oddly titled Staverton Steam Locomotive but the photograph features the 'Old Lady' on the Llangollen Railway at Berwyn Station. She is pictured in very early GWR livery and was believed, by many, to be the first locomotive to clock over 100mph (9th May, 1904). No.3440 is presently on show in the Main Hall at the National Railway Museum, York.

I was listening to Radio 2 this morning and it was announced that it was National Jigsaw Day, today, November 3rd 2015. I have not heard about it before but it seems appropriate that I post on this special day. 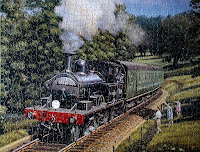 The picture features a Bits and Pieces, 1000-piece jigsaw titled The Railway Children. The artist is Stuart Booth and another puzzle displaying his artwork, Cornish Riviera Limited,  by Otter House, can be found in the post of 18th July 2013. The reasons I have chosen this puzzle are simple - subject and difficulty. It is not an easy puzzle to assemble due to many similar clumps of shape and colour in the tree areas. The composition, comprising a single track branch line in rural UK, an old locomotive and watching children, is highly pictorial and a proven, successful combination.

The locomotive, heading some old Southern Railway green coaches is an Adams Radial Tank, a famous design from c1885. On this date the Locomotive Superintendant in charge at the London & South Western Railway was William Adams, and his class '415' of 4-4-2T engines, included No.520 - No.30584 in BR days - as in the jigsaw picture.
Posted by David at 14:17