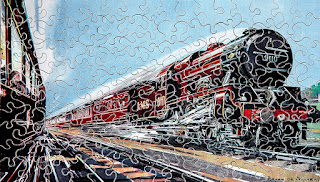 The title is "The Royal Scot"  but also on the box lid are the words The Famous Scottish Express of the L.M.S.Railway and SCOT PASSES SCOT. The artwork is by Bryan de Grineau.

Bryan de Grineau (1883-1957) was well known in the early-to-mid twentieth century for his automotive artwork especially for The Motor magazine and later, as a war correspondent for the Illustrated London News. He also painted several railway posters for the LMS in the 1930’s. He was born Charles William Grineau and used several pseudonyms in his lifetime in his quest for artistic fame. Three Hornby Book of Trains’ titles, between 1937 and 1940, used artwork by de Grineau on the front cover - No.6201 Princess Elizabeth (1937-38); No.6005 King George II (1938-39) and No.6231 Duchess of Atholl (1939-40). The paintings are superb and the first example No.6201 Princess Elizabeth has been marketed as a1000-piece jigsaw puzzle by The Works, high street store, (see post of 13 March 2016). The other two de Grineau paintings would also look superb as jigsaw puzzles. Bryan also produced artwork for the Meccano Magazine.


The highly collectible 150-piece, wooden jigsaw from A.V.N.Jones & Co. Ltd, shown above, features 'Royal Scot' class 4-6-0 No 6110, Grenadier Guardsman. The original painting by de Grineau was produced for a 1937 L.M.S. poster titled Scot passes Scot, promoting the famous 'Royal Scot' passenger service between Glasgow, Edinburgh and London Euston. The poster features No.6110 heading the famous train on the West Coast Main Line passing the same exress travelling in the opposite direction. The painting was also used more recently on a Hornby tea mug sold by a well known  High Street store, and in 2019, as the front cover of The Times - Golden Years of Rail Travel, book.
Posted by David at 17:24