Today's post, 29th September 2014, comprises two pictures of jigsaw puzzles each featuring a locomotive preserved and on show in a museum.


The first underground railway in the world opened on 10th January 1863 between Bishops Road, Paddington and Farringdon – The Metropolitan Railway (MetR). Following collaborations with the Great Western and Great Northern Railways, the MetR had an adequate number of its own locomotives and coaches to operate the service, without assistance, by July 1864.

Specially designed steam locomotives built by Beyer Peacock in Manchester were purchased by the MetR for working in tunnels. The engines were fitted with specially designed apparatus to condense exhaust steam and reduce the smoke released in the tunnels. Between 1864 and 1885 the ‘A’ class (44 built) and later ‘B’ class (22 built) locomotives were of the 4-4-0 tank engine type and they became the standard for both the Metropolitan and District Railways (1871). Note: these class numbers fluctuate a little according to which Internet source you access. The locomotives were originally painted olive green but this changed in 1885 to the familiar dark red or 'Midcared'. The locomotives continued as the standard type for surface and underground lines until electrification in 1905.

A small puzzle in my collection is the COMPANION puzzle, a Vintage series example of 260 pieces, titled Class A 4-4-0 1903. The jigsaw picture is a photograph of the preserved MetR ‘A’ class locomotive No.23. The photograph was taken in the London Transport Museum, Clapham, where it is on display. 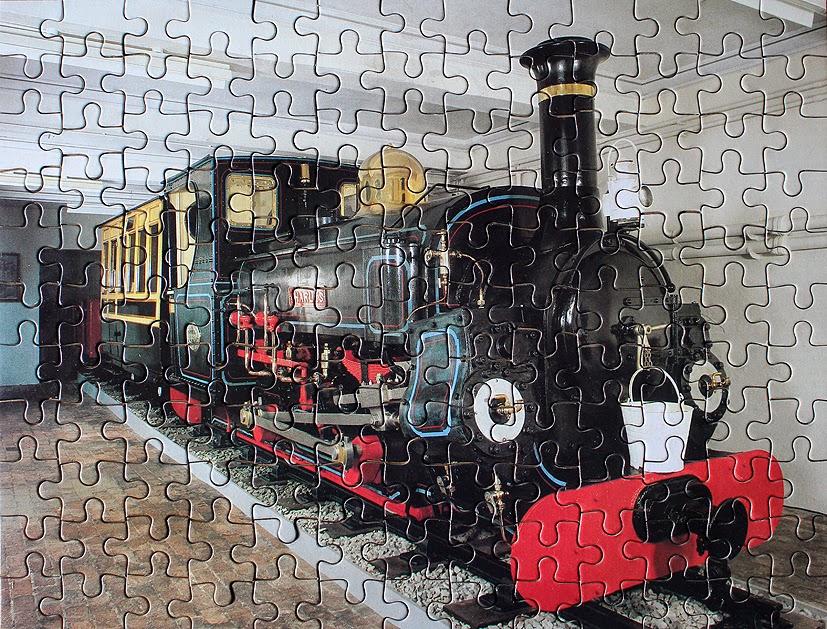 Photograph number two shows the ABYDOS 145-piece jigsaw titled Charles : The Steam Locomotive. The original, narrow gauge Penrhyn Railway of 1798  was constructed to transport slate from the Bethesda slate quarries to Port Penrhyn at Bangor, North Wales. The 0-4-0 saddle tank locomotive, Charles, was one of three locomotives purchased from the Hunslet Engine Company of Leeds in 1882, quickly followed by Blanche and Linda a year later. They replaced three, unique locomotives built in 1876 by the DeWinton Company of Caernarvon. Charles worked until the 1950's and was restored later. The engine, with others, is preserved and on show in the Penrhyn Castle Railway Museum.
Posted by David at 10:02

This post, 21st september 2014, comprises two pictures of jigsaw puzzles made by KG Games of Northampton.

The first picture features the legendary 'A1' later 'A3' class locomotive No.4472 Flying Scotsman. For information about this locomotive go to the post of 28th June 2011 where both the locomotive and train of the same name are described in detail. In the 500-piece jigsaw titled The Norfolkman, the headboard displayed on the smokebox door signifies a service that ran between London Liverpool Street and Norwich from 1948 until 1962. The photograph shows the locomotive in original London & North Eastern Railway (LNER), 'apple green' livery carrying a later BR style headboard.

The second picture features another 500-piece puzzle from the same Trains series titled Sir Nigel Gresley. In the photograph the locomotive is shown in LNER 'garter blue' livery carrying the LNER number 4498. It was the 100th 'Pacific' (4-6-2 wheel configuration) built by the LNER and was one of 35, 'A4' class locomotives. It was named after the designer and Chief Mechanical Engineer. Withdrawn from service in 1966 it was purchased by the 'A4 Locomotive Society' but is now owned by the 'Sir Nigel Gresley Locomotive Preservation Trust' and runs on the North Yorkshire Moors Railway.

This post, 10th September 2014, focuses on locomotives of the GWR and BR Western Region featured in two jigsaws made by Rembrandt Games of Watford. The benefits of researching the main jigsaw subject is also highlighted.

Top left is a picture of a jigsaw titled Great Western featuring artwork by Michael Jeffries. It is part of The Past Times Collection of 500-piece puzzles. The locomotive in the picture is a very good example where subject research adds to the jigsaw experience. No.4037 began life as a 4-4-2 locomotive of G. J. Churchward, built in 1906. In 1910 it was re-built as a 'Star' class 4-6-0 locomotive No.4037 and named Queen Phillipa. In 1926, under Charles Collett, it was re-built as a 4-6-0 'Castle' class locomotive and re-named The South Wales Borderers in 1937. As a 'Castle' she remained in service until 1962, when she was scrapped. In Jeffries' artwork the 'Star' is heading a rake of superb chocolate and cream clerestory coaches and 'gangers' are working on the adjacent line.

The second picture shows a 500-piece jigsaw from Rembrandt's The Age of Steam Collection. The 'Castle' class 4-6-0 locomotive in the photograph is No.5025 Chirk Castle, built in 1934 under Collett. The train is pictured passing a TPO (Travelling Post Office) pick up point near Chippenham in 1953. Once again researching the subject makes assembling the jigsaw more interesting. In August 1838 an Act of Parliament for the ‘Conveyance of Mails by Railways’ led to the creation of the official Railway Post Office (RPO), and specially designed mail coaches. The mail was exchanged manually until an apparatus to drop off and pick up mail automatically (net and gibbet) was perfected. This became operational in 1839. By 1841 the Railway Post Office employed guards on at least twenty-five mail routes in England and Scotland. In 1885 trains for the exclusive use of the Post Office were introduced and the same year also witnessed the sorting of parcels. The Post Office renamed the RPO’s, Travelling Post Offices (TPO’s) in 1928. The jigsaw title is Chirk Castle; the photograph was used by Rembrandt, courtesy of Colour Rail. For more information on the Travelling Post Office visit the website of The British Postal Museum & Archive at www.postalheritage.org.uk/history