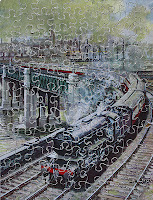 The first pic features a wooden jigsaw of 200 pieces from Ponda which probably originated from Ian Allan. In Robert Barnard Way's artwork, Gresley's  'V2' class 2-6-0 locomotive, No.60877, (built in 1940) is shown in BR black livery  hauling a long rake of BR carmine & cream ('blood and custard') coaches over the King Edward VII bridge at Newcastle. The 'cycling lion' BR motif indicates a time period of 1948-1956 for Way's painting. The full title of the puzzle is British Railways: Southbound Express hauled by Class V2 60877, on the King Edward VII bridge, Newcastle-on-Tyne. North Eastern Region. The curved shape of the train suits the portrait style (vertical) perfectly.

The second shot is of a 500-piece puzzle from Falcon titled Flying Scotsman. The artwork is by George Heiron. Featured is Gresley's 'A1' class 4-6-2 locomotive No.2750 Papyrus. The locomotive  was built in 1929 and was upgraded to 'A3' status following a rebuild in BR days, 1963. The LNER express, Kings Cross - Edinburgh, in the picture comprises Gresley's famous teak coaches. The definite article was added to the express headboard by BR in the 1950's.
Posted by David at 13:19

Steam with Other Modes of Transport

Artwork, showing steam trains with alternative modes of transport, has been used by jigsaw manufacturers for many years. Cars, aeroplanes, buses, canalboats and ships have been included with steam trains for different reasons, some purely pictorial, others for comparison purposes. Races between steam trains and road vehicles for instance have always been popular, and canal boats have often been used in conjunction with a busy main railway line to introduce tranquility. Today's post, 19th August 2012, includes three pictures of jigsaw puzzles showing alternative modes of transport compared and contrasted with steam locomotion.

The first pic features a jigsaw of 500 pieces from Falcon/Jumbo depicting two Spitfire aeroplanes, a steam train and a small vintage car. I am no expert on the latter but perhaps the car in the picture is an Austin Seven which was manufactured until 1939. The planes are overflying the railway which can be interpreted - wartime or peacetime -  in different ways; the train is depicted at a small rural crossing. The driver of the parked, lineside car watches intently as railway workers and train passengers wave to the pilots. The jigsaw title is Planes, Trains and Automobiles although there is only one train and one car. The artwork is by Bill Perring. The locomotive is a class 'H' 0-4-4T tank engine, No. 1263 of the  Southern Railway, previously of the South East & Chatham Railway. 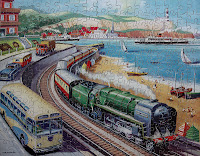 Seaside Traffic, a Victory wooden jigsaw of 300 pieces, from original artwork by T. E. North, is shown in pic number two. It is a fine example of a steam train as the focal point with other examples of transport sharing the picture space. A train headed by BR 'Standard' class '7' 4-6-2, No.70001 Lord Hurcomb, is shown at speed beside a busy road. A coach, a car and caravan and a small lorry are shown on the road while to the other side of the railway line is the sea. On the sea are two passenger ships and several, small recreational craft. The puzzle is available as 'used' in  a range of sizes, 75-400 pieces.

Continental holidays were well served by the Southern Railway. In the 636-piece panoramic puzzle from Gibsons (pic number three) a luxury boat train is pictured at the Ocean Liner Terminal at Southampton. The Cunarder - a Waterloo to Southampton Pullman service - is the name of both the train and the jigsaw puzzle. The artwork is by Malcolm Root and the locomotive in his picture is ‘Battle of Britain’ class 4-6-2, No.34081 92 Squadron, which is now preserved and owned by the Battle of Britain Locomotive Society. The ocean liner in the picture is Cunard Line’s Queen Mary; a stylish, chauffeur-driven car and a couple of 1950’s coaches are added for effect. A photograph of ‘The Cunarder’ train, similar to Malcolm’s artwork but including a ‘Lord Nelson’ class 4-6-0 and a different headboard, is shown in Dave Peel’s excellent book, ‘Locomotive Headboards - The Complete Story’.