The aesthetic appeal of steam trains and popularity of jigsaw puzzles have been used by many companies in the past including Bulmers, Cadburys, Dunlop, Cunard and of course, the Board of the Great Western Railway to promote their products. Even the Co-operative Society got in on the act with a puzzle produced in house in 1935. It features a train displaying the slogan "A Trainload of Good Things from C.W.S. Factories for Co-operators." In today's post 29th May 2011, I am using two pictures, each showing a jigsaw from two of the above companies, Bulmers and Cadburys. 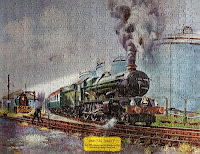 The first pic shows the 1970, 620-piece puzzle from Bulmers, reproducing a painting by Terence Cuneo. The GWR icon, 4-6-0 No.6000 King George V, is the focal point of the jigsaw. The famous cider producers negotiated a sub-lease of the locomotive from Swindon Corporation in 1968. The latter had the locomotive in trusteeship with a view to exhibiting her in the GWR Museum in the town. She was moved to the Bulmers Railway Centre in Hereford in October 1968 and officially handed over a month later. Bulmers had 1.5miles of track at Hereford. The lease expired in 1987 and the locomotive was exhibited at Swindon  in the following year. She was a major exhibit at 'Steam, The GWR Mueum' in Swindon until 2008 when she was moved to the NRM Museum in York;  No.92220 Evening Star moved in the opposite direction.

The Cadbury's promotional jigsaw I have chosen, made by Gibsons, was marketed with two bars of chocolate (they still are) and is derived from a painting by Kevin Walsh. It was part of a double offering of 500-piece puzzles from the chocolate manufacturers titled From Beginning to End. This particular puzzle depicts a canal boat, a road vehicle and a steam train, informing us of how raw materials (cocoa, milk etc) were transported (The Beginning). The locomotive is a fine, red liveried example of a quayside workhorse, the 0-4-0 saddle tank, appropriately named Cadbury. In the second puzzle - not part of my collection as no steam locomotive is involved -  a family is being served the finished products in an old fashioned, British sweet shop (The End).
Posted by David at 19:13

I have used some pictures of jigsaws featuring steam trains and winter snow previously, and the two in today's post, 22nd May 2011, are equally as good in my opinion.

The first shot depicts a 500-piece jigsaw from the 1980 Age of Steam series by Arrow Games, titled LMS Princess Alice. Stanier 'Princess Coronation' class 'Pacific', No.6223 Princess Alice, is shown in LMS blue and silver 'Coronation Scot' livery with corresponding streamlining. The coaches are LMS maroon ('crimson lake'), unfortunately, and not matching 'Coronation Scot' blue and silver examples. The setting is winter snow which adds a pleasing, pictorial ambience to the painting/jigsaw picture; the artist is not named, however.

The second pic shows a W.H. Smith 500-piece jigsaw titled Nearly Home. The original artwork is by Kevin Walsh. A passenger train headed by a 'Castle' class 4-6-0 locomotive, waits in a station. Several passengers are exiting the station. Some are clutching wrapped presents, some are approaching a waiting 1934 Austin LL (Low Loader) Taxi, some are walking away and others are stood chatting. A decorated Christmas tree is just visible in the brightly lit station waiting room and a  light covering of snow enhances this December scene.
Posted by David at 23:25

In today's post - 16th May 2011 -  I am using two photographs of wooden jigsaw puzzles, both featuring 'King 25' in BR blue livery. Both jigsaws are from my collection of nearly four hundred puzzles, all featuring British steam railways. 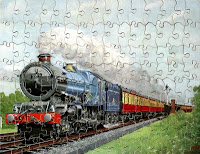 The first pic shows a Victory puzzle of approximately 120 pieces from the TP3 series. Charles Collett's giant 4-6-0 'King' class is represented by No.6025 King Henry III, in BR 'Garter' blue livery. The title is Western Region Express. This locomotive graced GWR and, later, BR Western Region 'metals', from 1930 to 1957. Vic Welch produced the original artwork; he was a famous railway artist of the time who produced many works for Ian Allan. Welch's work was prominent in widely read Ian Allan publications such as 'Railways Illustrated' and 'Railway World'. 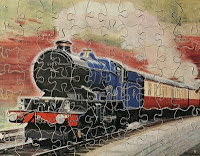 The second picture shows a 80-piece jigsaw from the Ian Allan company and features the same locomotive in the darker 'Royal' blue livery. The artist is A. N. Wolstenholme. The title is not on the box, unfortunately, but could be as follows - King class 4-6-0 heading a BR Express. This painting differs in style from Vic Welch's example as it displays a more indistinct, slightly abstract backdrop.

PLEASE NOTE THE CHANGE OF EMAIL ADDRESS AT THE TOP OF THE BLOG.
Posted by David at 18:38

Jigsaw puzzles and steam railways successfully coincided in the 1920's when the board of the Great Western Railway Company (GWR) introduced a range of promotional jigsaw puzzles that unashamedly exploited the relationship between railway and passengers. The plywood jigsaws were sold cheaply or even given away free of charge. They were an effective way of showing off all the positive aspects of steam railway travel associated with the GWR including holiday destinations, cities, castles, cathedrals, stations, local history, special locomotives and trains etc., etc. At the same time, the popularity of jigsaw puzzles had never been higher and over a million puzzles had been distributed by the end of the following decade. Chad Valley's origin was in the Birmingham printing and book binding business of Anthony Johnson c1820. In 1860 Johnson's two sons set up a similar business in the same city. In 1897 the two sons, Alfred and Joseph, acquired new factory premises close to the Chad stream at Harborne, near Birmingham. These premises became known as the Chad Valley Works. The Chad Valley Company Ltd., was formed in 1920 when three, company owned factories were merged. Some of the finest wooden jigsaws were made between the two World Wars although the company was probably more famous for making teddy bears.

Today's post, 11th May 2011, comprises two pics of steam train jigsaws, with both locomotives sporting famous headboards - The 'Cheltenham Flyer' and the 'Torbay Express'. The former was famous for making and breaking speed records, the best example being the run of locomotive No.5006 Tregenna Castle in 1932. The 'Castle' class 4-6-0 hauled the express from Swindon to Paddington at an average speed of 81.7 mph. The Chad Valley jigsaw of 200 pieces, titled The Cheltenham Flyer, is reproduced from an 'F. Moore' (a syndicate rather than a single artist) original and shows the express speeding over Brunel's Maidenhead Viaduct spanning the River Thames. At the head is 'Castle' class 4-6-0 No. 5000, Launceston Castle - it is shown in pic number one.

The Torbay Express, a 375-piece puzzle from Chad Valley is shown in pic number two. At the head of the train is the icon of GWR metals, 'King' class 4-6-0 No.6000, King George V. The first 'Torbay Express' ran in 1923 from Paddington to Torbay (Torquay) and by the mid 1930's the journey was taking 3.5hrs including a short break at Exeter and station stops at Paignton, Churston and Brixham. 'Castle' or 'King' class locomotives usually headed the express.
Posted by David at 22:22

Pic number one shows 4-6-0 No.6100 Royal Scot in London Midland Scottish (LMS) 'Crimson Lake' livery (which it never actually carried in this rebuilt guise). The original class of parallel boiler class 6P 'Scots' was built by the North British Locomotive Company (50) between 1927 and 1930 and Derby Works (20), three years later; Henry Fowler was the designer. Between 1943 and 1955 the whole class was rebuilt, virtually from scratch, to the design of William Stanier, who had taken over as Chief Mecanical Engineer of the LMS, in 1932. This  work was, however, supervised by Geoge Ivatt as Stanier's expertise was required by the Government for the war effort. The loco in the Hestair 100-piece puzzle (Puzzler 100 series), in restored freshly painted condition, is fronting Bressingham Steam Museum.


The second pic shows the 72-piece, Ponda plywood puzzle, titled Rebuilt 'Royal Scot' 4-6-0 No.46125 3rd Carabinier. The locomotive is liveried in BR 'Brunswick Green' with the early BR (1948-56) 'lion and wheel' motif on the tender. The artist was Vic Welch. The front label on the jigsaw box shows the words "Ian Allan Jigsaw Puzzle" - many Ian Allan jigsaws were (made?and) distributed by Ponda.
Posted by David at 18:13