The strong connection between the Guild of Railway Artists (GRA) and jigsaw company Gibsons, continues into 2020. G.R.A. artists including Fellows Philip Hawkins, John Austin, Malcolm Root and Terence Cuneo (deceased), and Members Eric Bottomley, Barry Freeman (deceased), Gerald Savine and Stephen Warnes, among others, have jigsaws to their name. David Noble is now added to this formidable list. The latter currently has two 2020 additions to the Gibsons' railway portfolio and I will use both on my blog. 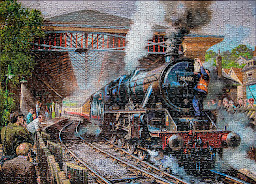 The railway in the painting is owned by the The North Yorkshire Moors Historical Railway Trust Ltd. which began as the NYMR Preservation Society in 1967. The railway was opened in 1973, following completion of the purchase of the line a year earlier. Pickering Station is the starting point of the NYMR; at 18 miles long running through Levisham and Goathland to Grosmont it is the third longest preserved railway in England. Additional services to the seaside town of Whitby were introduced in 2007.

The locomotive in David's painting is ex LMS class 5MT (mixed traffic) 4-6-0, No.45407 The Lancashire Fuslier. The locomotive was built in 1937 by Armstrong Whitworth of Newcastle and is owned by the Riley Engineering Company, Riley & Son. In the picture, many enthusiasts are attracted to the train about to leave for Grosmont and a worker adjusts the position of a smokebox door lamp. Following Heritage Lottery Funding, the station was renovated between 2000 and 2011 and a new roof installed. The new roof can be seen clearly, in David's painting.

This post, 18 June 2020, concentrates on the second of the Ravensburger Heritage Series of paired steam railway jigsaw puzzles. The first was described in the post of 22 April 2020. The Bluebell Railway (BR) and the Severn Valley Railway (SVR) are represented in this second pair.

The pic on the left shows the 500-piece puzzle titled Hampton Loade, a station on the SVR. At the head of the passenger train entering the station is the '2800' class 2-8-0, No.2857. The  locomotive, designed by G.J.Churchwood for the Great Western Railway (GWR), was built at Swindon Locomotive Works in 1918. It was the 69th locomotive to leave the famous Barry Scrapyard in South Wales, in August 1975, destined for the SVR.  In the painting by Trevor Mitchell passengers and onlookers stand on the platforms admiring the oncoming 'reincarnation' of a past era. Children appear fascinated at the possible first sight of a steam engine. A milk churn and various types of luggage and trolleys are integrated into the composition dominated by the station building.

The pic on the right shows the 500-piece jigsaw titled Horsted Keynes, a station on the Bluebell Railway. The latter was the first preserved standard gauge railway in Britain; opened in Sussex in 1960. The two locomotives in Trevor Mitchell's painting are 'P' class 0-6-0T's - No.178 in South East & Chatham Railway (SECR) colours, and No.323 'Bluebell'. The latter loco is on static display currently; No.178 remains in minimal activity, awaiting repairs. Both locomotives were designed for the SECR, c1910, by Harry Wainwright. Human interest is present in this painting with family groups and visitors enjoying close up views of the two engines. Signal gantries, a signal box and a luggage trolley add to the ambience.