This post, 11 February 2020, features a 500-piece jigsaw from Gibsons titled Tangmere Hurricanes. The jigsaw is marketed in a small  gift box - the artwork is by Nicholas Trudgeon. 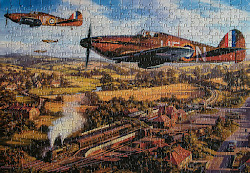 Before WWII, 601 Auxilliary Squadron, known initially as the 'Millionaires Squadron' (composed almost entirely of super rich gentlemen) was based at RAF Northolt. However, when the war started in 1940, the Squadron was mobilised from RAF Tangmere, near Chichester in West Sussex. Hawker Hurricanes and Supermarine Spitfires were operated by 601 Squadron.  Pilots engaged the Luftwaffe  from their base by the sea, protecting shipping in the English Channel; hefty casualties were incurred. The famous WWII pilot Wing Commander Douglas Bader was stationed at Tangmere in 1941.

The jigsaw description on the gift box is summarised as follows  - Four Mk1 Hurricanes of 601 Squadron, refuelled and rearmed, climb to re-join the battle during the summer of 1940. Below, life goes on as a Southern Railway train pulls out of a local village station........these renowned aircraft served the RAF in all major theatres of the Second World War.
Posted by David at 15:44