Ryco Crafts of Ripon produced jigsaw puzzles for the National Railway Museum (NRM) in 2004 and two of them are featured in today's post, 20th October 2012. 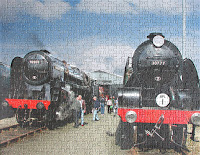 Both puzzles comprise 500 pieces. The first, titled Steamfest, features a reproduced photograph of  two locomotives at this gala event. On the left is David Shepherd's BR class '9F' 2-10-0,  92203 which he named Black Prince. This name was not carried by any locomotive for BR.  The famous wildlife artist purchased two steam locomotives from British Railways (BR) in 1967 - No.92203 and BR 'Standard' class '4MT' 4-6-0 No.75029 which he subsequently named The Green Knight. Following a diligent search for land in south west England on which he could build a railway, David found a derelict area at Cranmore in 1971. Together with enthusiastic friends, David purchased the site and the East Somerset Railway was opened two years later. On the right hand side in the jigsaw picture is SR 'King Arthur' class 4-6-0, No.30777 Sir Lamiel, part of the National Collection. 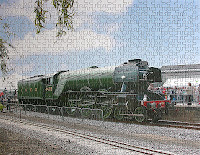 The second jigsaw photograph depicts (Sir) Nigel Gresley's class 'A1' (later 'A10' and 'A3') 4-6-2, No.4472 Flying Scotsman, also the title of the jigsaw.The locomotive has been immortalised in many forms, not least in jigsaw puzzles. Most jigsaw manufacturers / retailers pictured Flying Scotsman  in pre-1960 form, without smoke deflectors - Falcon, Ravensburger, Arrow, Victory, Hope, W. H. Smith and Tower Press for example.The NRM issued the puzzle replicating a photograph of the locomotive with German-style smoke deflectors (affectionately known as 'blinkers') attached. The icon of UK railways became part of the National Collection in 2004, purchased for the nation with private, public and Heritage Lottery funding.

A third Ryco Crafts / NRM jigsaw puzzle published at the same time is described in the post of 11th January 2011.
Posted by David at 21:32