Today's post, 25th December 2011, focuses on a jigsaw of which I am particularly proud. It replicates  one of my brother's photographs taken on 22nd April 2011 at Red Bank, Newton-le-Willows, and is therefore totally unique. 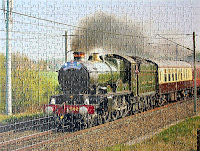 The rail tour in the picture was 'The Great Britain IV' that toured the country over nine days in April 2011. 'Castle' class 4-6-0 locomotive No.5029 Nunney Castle, headed the rail tour on the seventh day from Preston to Bristol. The locomotive was designed by Chief Mechanical Engineer of the Great Western Railway Charles Collett, in 1934, one of a class that eventually numbered one hundred and seventy one. No. 5029 was sent to Barry Scrapyard in 1964 and rescued twelve years later by private buyers in partnership with the Great Western Society. Since the mid 1990's the locomotive has been privately owned, recently by Jeremy Hosking.

The locomotive returned to the main line in 2000 and following overhaul, again in 2008. The only fault with the picture is the phone mast, one of a growing number hated by photographers, almost on a par with electricity pylons.

The jigsaw is a 500-piece example, superbly made by www.myphotopuzzle.co.uk It is produced in thick card and presented in an equally excellent box. There are many such companies producing  jigsaws from digital photographic files and/or photographs - just type 'personal jigsaw puzzles' into your browser.
Posted by David at 20:02

An Unusual 'Glow in the Dark' Puzzle 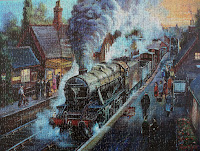 The puzzle pictured in today's post, 18th December 2011, is very unusual (and rare) for two reasons - it features a UK steam railway scene from an American jigsaw manufacturer and it glows in the dark.

The first photograph shows the jigsaw in daylight. It is a picture of a Stanier class '8F' locomotive, 48445, hauling a freight train through a station at dusk or dawn. The period is probably between 1948 and 1956 when the British Railways logo was the 'cycling lion', clearly shown on the tender. The station lights mixed with ambient, residual light result in a memorable picture by British artist Peter Bradshaw. The jigsaw is a 1000-piece example by Empire of Massachusetts.


The second photograph shows the jigsaw in a blackened room after illuminating it for a minimum of twenty minutes with a bright light. Obviously the puzzle attracts more interest at night because of the eeriness that it projects but it is a very interesting puzzle when viewed normally. Station staff and passengers add human interest to a typical railway scene.
Posted by David at 20:28

Within the theme 'trains in stations' there were many jigsaws to choose from in my collection of over 400 steam railway puzzles and some have already been seen on the blog. Here, 12th December 2011, are photos showing two more.

The world's first underground railway, The Metroploitan Railway, was opened in Januray 1863 and connected Faringdon with Paddington. It was an instant success and carried an average of 26,000 passengers each day in its first six months of operation. The first pic is of a 500-piece puzzle from the Gibson's Heritage Collection featuring artwork by Barry Freeman.  The title is Memories of Metroland. 'E' class 0-4-4 tank engine, No.1, is shown at Quainton Road Station, awaiting the 'right to go',  in the early 1950's. It survived in service until 1963 and is now preserved. Also pictured in the station is a Beyer Peacock 4-4-0 tank engine No.23 and a member of the station staff holding a newspaper while chatting to the engine driver.

The second picture shows a 1000-piece jigsaw from Gibsons titled Summer Outing from a Malcolm Root original canvas. Featured is an open top bus of the 1920's (?) travelling past Witham Station with a full load of passengers. Two Essex towns, Chelmsford and Witham are displayed on the front destination board. Only Malcolm Root knows exactly what is going on in the scene but many people are depicted, some at the side of the road overlooking railings covered with advertisements for Cadburys products. They may be watching a train headed by a superb 4-4-0 'Claud Hamilton' class locomotive of the Great Eastern Railway (GER) exiting the station. Or they may be watching a second locomotive waiting in the nearest platform to the railings. Human interest is increased by the inclusion of a small boy eating a bar of chocolate. Is the summer outing by bus or train or does it include journeys by both? The jigsaw was used by Cadburys as a promotional example.
Posted by David at 18:34

The first picture shows a Great Western Railway (GWR) 'County' class 4-6-0 locomotive designed by Frederick Hawksworth, Chief Mechanical Engineer (CME) of the GWR and British Railways (BR) Western Region, from 1941 -1949. The locomotive is No.1000, County of Middlesex, and the artwork is by Paul Gribble. The title of the jigsaw is County of Middlesex (GWR) leaving Temple Meads. The latter station, one of Isambard Kingdom Brunel's famous legacies, is in Bristol.

The second picture shows one of Sir William Stanier's powerful 'Princess Coronation' class of 4-6-2 locomotives. He was the CME of the London, Midland & Scottish Railway from 1932 until 1944 having previously gained experience at the Swindon Works of the GWR. The locomotive pictured is No. 46223 Princess Alice and the title of the jigsaw is Princess Alice - BR Midland Region. The artist is David Weston. This locomotive is also featured in a jigsaw pictured in the post of  22nd May 2011, but in its original streamlined form of 1937.
Posted by David at 11:17