This post, 28th June 2011, comprises pics of three jigsaws all depicting the same locomotive and in two cases, the same train.

The locomotive. Probably the most famous locomotive in the UK is Sir Nigel Gresley's 'A1' (later 'A10' and 'A3') class 4-6-2, Flying Scotsman. The pioneer of the class No.1470 Great Northern appeared on the Great Northern Railway (GNR) in 1922.  The third one, No.1472 Flying Scotsman, emerged a year later. Although built by the GNR, a predecessor of the London & North Eastern Railway (LNER), Flying Scotsman wasn't named immediately. The locomotive was the first to enter service on the new LNER  on 22nd February 1923. She acquired her famous name and number 4472 in 1924 for her appearance at the British Empire Exhibition. In 1934 she became the first UK locomotive to 'officially' break the 100mph speed barrier. She was re-numbered again as 502 then 103 under 1943/1946 schemes and, in British Railways (BR) days, became No.60103.

Pic number one shows the locomotive and train in a 1000-piece jigsaw from Past Times. The artist is not named although it is certainly Mike Jefferies.

The second also features the loco and train but the puzzle is a 1000-piece example from W.H. Smith. The illustrative artwork is by Peter Bradshaw. 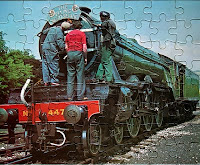 The third pic shows a 64-piece jigsaw from Philmar. The locomotive has been photographed with maintenance men on the buffer beam. Perhaps they have fitted the headboard. Interestingly, the headboard uses the definite article, originally but rarely used in 1946 but often used in BR days, from the early 1950's.

Remember - if you carry out a little Internet research on the jigsaw taking shape before you, it makes the whole experience more interesting and rewarding.
Posted by David at 05:37

This shape is used very rarely by steam railway jigsaw puzzle manufacturers but such examples attract more attention when assembled on a family table top. I have used two examples in previous posts and here is a picture of another  (26th June 2011) - I only have four in a collection of around 400 steam railway jigsaws. 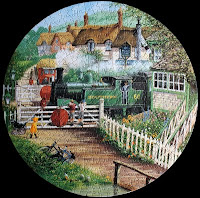 The puzzle was retailed by W.H. Smith but I'm sure its manufacture would have been outsourced. The puzzle is of 500 pieces, reproduced from a Rob Johnson painting. A small, Southern railway 0-4-4 'M7' tank engine, No.60, designed by Dugald Drummond is pictured on a level crossing in a very English country village. Thatched cottages, country gardens, a hay cart, an old Royal Mail van and a few local people add interest to a superb picture.
Posted by David at 20:39

Good Companion jigsaws featuring steam trains, have been covered in previous posts. For today, 22nd June 2011, I am including pictures of another pair. However, with these two puzzles I must differentiate between THE Good Companion and GOOD COMPANION ranges of jigsaws. THE Good Companion puzzles of 400 pieces, with the definite article in upper case text, include the well known examples pictured in previous posts and in the second  photograph below. However, the definite article is not used in practise and the puzzles are commonly known as 'Good Companion' jigsaws. Causing some confusion, several series comprising six, 500-piece puzzles were made later and these were marketed as GOOD COMPANION (in upper case text) puzzles, without the definite article. These also are commonly known as 'Good Companion' jigsaws. The original range of THE Good Companion jigsaws comprised around one hundred and seventy seven titles. All of the jigsaw boxes carried the familiar logo of a hunter with his dog and the marketing name of THE Good Companion on the box front and sides. In my collection are four railway jigsaws, each from a GOOD COMPANION series of six puzzles, and I know of at least one other series of six puzzles. These smaller jigsaw boxes did not carry the hunter and dog logo, but instead one comprising a clear jigsaw puzzle piece, outlined in white, enclosing the number 500. The marketing name of GOOD COMPANION was printed on the four sides of the box, but not on the front.

Philip D. Hawkins is a renowned railway artist but few of his paintings have been reproduced in the jigsaw trade. A Hawkins' painting was used by GOOD COMPANION for a 500-piece puzzle, titled Locomotion. In the jigsaw picture, LMS 4-4-0 compound locomotive No.1167 is shown heading 'crimson lake' passenger stock, but unfortunately my copy is not the best.  Locomotion was number six in a particular series of 500-piece, GOOD COMPANION puzzles; there were at least four other similar series. This particular puzzle suffered from a  reflective surface thus causing a serious problem when assembling in bright light.

T.E. North's name is indelibly linked to many railway jigsaw puzzles and to several manufacturers. Many examples have already been featured on this blog. Picture number two shows North's  artwork  replicated by THE Good Companion in a 400-piece jigsaw, East Coast Route. The approach to Newcastle Station  forms the backdrop to the picture. A mainline trained headed by a Gresley 'A4' class 4-6-2 and three freight trains are depicted on a myriad of lines close to the station. The city once boasted the largest railway crossing in the world accommodating up to 400 trains per day. Poor printing caused the main  problem with this particular puzzle, leading to a slightly blurred image.
Posted by David at 22:05

Today's post, 13th June 2011, comprises two pics showing the most powerful British passenger steam locomotives, the 'Princess Coronation' class, designed by William Stanier.The class of thirty eight was built for the LMS between 1937 and 1948; the locomotives were an improved version of the previous Stanier 'Pacifics', the 'Princess Royal' class.

Pic number one features the now preserved No.46233 Duchess of Sutherland, in a superb, 1000-piece jigsaw from Waddingtons.The locomotive is complete with equally handsome 'Royal Scot' headboard and is about to depart Euston for Scotland. The title of the puzzle is Nearing Departure and the original, superb  artwork is by Malcolm Root.

Another brilliant (probably the best) railway artist, Terene Cuneo, was responsible for the original canvas reproduced as a jigsaw in the second pic. Titled Duchess of Hamilton on Shed, the now preserved loco, No.46229, is depicted in a railway shed setting, complete with the ambience associated with such a location. The wooden puzzle is by Wentworth and is of 500 pieces.


I must add that these two puzzles are among my all time favourites, magnificent artwork reproduced as superb products.
Posted by David at 11:22

Photographs of jigsaws showing miniature railways comprise today's post, 6th May 2011. Miniature railways include all those whose gauge is less than the 4ft 8.5ins standard, set for mainline UK railways by the 'Gauge Act' of 1846. I was surprised to find that there are more than 150 narrow gauge railways listed on the website www.miniaturerailwayworld.co.uk

Pic number one shows perhaps the most famous of the English miniature or narrow gauge railways, the Romney, Hythe & Dymchurch Railway, just as famous for its extraordinary war efforts as its peacetime activities. The jigsaw  represented, of 175 pieces, is a rectangular, 3D 'constructional' example from Victory. Titled Miniature Express the assembled puzzle features  the engine, driver and train, cut from thicker plywood, assuming a raised posture across the puzzle centre. The jigsaw came with its own purpose-made frame and was made in other sizes, although not in 3D. The artist is not named. 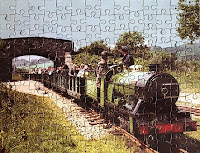 The second pic features a 125-piece jigsaw from Tower Press (Chester series) titled Miniature Railway. Although the railway is not named it is likely to be the Ravenglass & Eskdale Railway of Cumbria. The locomotive probably is the 0-8-2 type River Esk heading a crowded passenger service beneath a stone bridge.


The popular Welsh narrow gauge railways are well represented in jigsaw puzzle manufacture and examples from Whitman will be featured in a future post.
Posted by David at 18:20