This post (29th January 2011) is dedicated to a special locomotive of the Great Western Railway (GWR). The 'Castle' class 4-6-0 locomotive No.100 A1 Lloyds was rebuilt from a G. J. Churchward 'Star' class locomotive, No.4009 Shooting Star in 1925, during the tenure of Charles Collett as the GWR's Chief Mechanical Engineer. She retained the number and name until 1936 when, at a naming ceremony at Paddington, she became 100 A1 Lloyds. She was known as an oil burner in the late 1940's before being withdrawn from service in 1950.

The Falcon 300-piece series Steamtrains  included a set of four jigsaws reproducing the paintings of George Heiron. One of them was Castle Class - GWR showing No.100 A1 Lloyds leaving Bristol Temple Meads Station with a Paddington bound express. This jigsaw is shown in the accompanying picture. The other three jigsaws in this particular set are County Class - GWR, Clan Class LMS, and Claughton Class - LMS.
If you wish to know more about this oddly numbered and named 'Castle' just Google 'locomotive 100 A1 Lloyds' and many references will appear.
Posted by David at 20:49

When I recently counted the number of jigsaw puzzles in my thematic, UK steam railway collection, (nearly four hundred) I was rather surprised to see seventeen Ravensburger examples, more than I thought. I have chosen two for this post (26th January 2011) with original artwork by Trevor Mitchell and Kevin Walsh.

The Rivals is a 500-piece puzzle featuring a Great Eastern Railway (GER) class T26, (LNER class E4) 2-4-0 tender  locomotive, No.7490. The loco is heading a short passenger train beside a country road on which an old vintage bus (1920's?) is 'speeding' along. The battle for supremacy between road and rail is a popular subject among jigsaw manufacturers and Trevor Mitchell's artwork doesn't disappoint. The milk churns add to the country atmosphere. The locomotive, one of a class of 100 designed by James Holden from 1891, is preserved at Bressingham Museum. Can anyone send me information about the bus? (Email address at the top of the blog).

The 1000-piece jigsaw, Watching the Trains, is a wonderful study of two children, a small boy and an older girl, admiring 'The Flying Scotsman' train as it powers by. A small dog is held on a lead by the boy to add to the ambience, and the children wave to the engine driver and passengers. Kevin Walsh must have painted a scene from British Railways' days, (1950's) when the complete name of the express, including the definite article, was used on the headboard. The logo on the tender and the number 4472, both of LNER origin (pre BR days), are puzzling, however.
Posted by David at 22:05

Production of The Age of Steam series of steam railway jigsaw puzzles, by Arrow Games, began in the same year that the company was formed - 1965. All the series of four, 500-piece puzzles were made between 1965 and 1980. The jigsaws were made in Ireland even after Arrow became part of the Milton Bradley Group in 1972.  A series of 300-piece puzzles was also produced in 1985. This post (22nd January 2011) comprises two pics showing examples from the the first and third series, and a third showing a printed description of series one.

The first pic shows No.6105 Cameron Highlander of the LMS, climbing Camden Bank, after exiting Euston Station with the 'Royal Scot' express. Details of each of the four jigsaws in this first series were included with every  puzzle, as an A5 printed sheet. It is important to preserve this sheet with each puzzle; pic number two shows the printed sheet.

The provision of such details meant that each jisaw had no box title. The original artwork for this jigsaw was by George Heiron, who in my view, was one of the best artists at replicating exhaust.
The third pic in the post shows a jigsaw from the 1980 series titled LMS Compound. The artist is not named. The class 4P 4-4-0 locomotive, No. 41125, heading a rake of BR carmine & cream coaches is depicted passing through a distinctively rural scene. One hundred and ninety five of the class were built by the LMS between 1924 and 1932. The Midland Railway had previously built forty five which were integrated into the LMS batch.
I am still receiving comments (mostly positive) about the blog, but if you wish me to reply please email me by clicking on the email address at the top of the blog.
Posted by David at 22:30

Jigsaw puzzles in the form of composites/collages/montages are increasingly popular with jigsaw manufacturers today, with King and Gibsons to the fore. Today's post (11th January 2011) comprises two such jigsaw puzzles but from two other manufacturers - Ravensburger and Ryco Crafts (for the National Railway Museum, York). 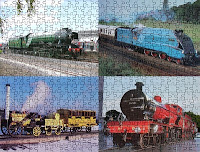 The jigsaw from Ryco Crafts for the NRM is shown in pic number two. The jigsaw of 520 pieces depicts four locomotives from the national collection; the design is similar to the previous puzzle. Pictured
are the following - Gresley's 4-6-2s, No.4472 Flying Scotsman and No.4468 Mallard; George Stephenson's Rocket; Samuel Waite Johnson's 4-4-0 (Midland Compound) No.1000. The jigsaw is titled Festival of Steam.
Posted by David at 23:19

The railways played a crucial part in transportation throughout the Second World War. This post, our first for 2011, comprises two jigsaw puzzles each one showing a different aspect of wartime railway traffic.

The first picture shows a Waddingtons' jigsaw puzzle of 500 pieces titled Christmas Leave. Featured is a  typical wartime station scene by artist Trevor R. Owens.  A southbound train is slowly pulling into Lancaster Station headed by LMS 'Black 5' locomotive No. 4905. Waiting on a snow-covered platform are men and women of the Armed Forces, ready to board and travel home for Christmas. The sunset and low level of natural lighting complement the artificial station lights to impart a warm, evocative ambience to the picture.

The second photograph features a 1000-piece puzzle from Gibsons titled The Evacuees. On August 31st 1939, the government issued the order "Evacuate Forthwith" and the operation to evacuate nearly 2 million of Britain's school children began. 'Operation Pied Piper' became the biggest and most concentrated mass movement of citizens in our history. Within a few days 1.9 million school children had been transported from major towns and cities, in danger from German bombing raids, to places of greater safety in the countryside. Many other children of wealthy families were evacuated privately. The jigsaw reproduces an original painting of Stalbridge Station in Dorset, by Kevin Walsh.  In Kevin's superb picture children and their chaperones (including teachers) have disembarked from a train. At the head is a  'Lord Nelson' class 4-6-0 locomotive designed by Richard Maunsell. Children are shown in the station approach yard, some boarding a bus (a Guy?), whilst others are enjoying stretching their legs or taking refreshments from assembled members of the WVS (Women's Voluntary Service).
Posted by David at 19:06