Kevin Walsh's artwork is highly sought after by jigsaw manufacturers. In today's post, 30th August 2013, I am using three pictures of jigsaw puzzles featuring  his paintings. Kevin hails from the rugby league town of Castleford in Yorkshire and his early affinity for painting was nurtured at Wakefield Collage of Art. His early success was in the aviation field but his love of painting saw him branch out into community life, landscapes and transport. His love of the latter is clearly illustrated by the inclusion of some type of transport of bygone days in many of his pictures. Rural associations are strong features in his paintings with nostalgia buried deeply in his brush strokes. Several of Kevin's rural scenes include a steam train as an important element of composition. At my last count, twenty four jigsaw puzzles  named in my inventory of over eight hundred steam train examples, replicate Kevin's artwork. Gibsons, Ravensburger, Wentworth and Falcon/Jumbo are among his patrons. 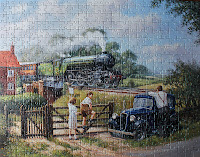 First up is a picture of the Ravensburger 500-piece jigsaw unimaginatively titled Green Steam Engine.  Kevin's painting features Gresley 'V2' class 2-6-2 locomotive No.4791 passing a rural house with two children looking on from the garden gate. A man standing by his vintage Austin car is also included, admiring the green engine as it roars by.

Next are two pics showing all or part of a Kevin Walsh painting used in the jigsaw trade. The first, picture number two overall, shows the 1000-piece jigsaw by King International titled Following the Trains. The painting  is typically Kevin's featuring a wonderful steam train, in this case the famous express 'The Flying Scotsman', being admired by a couple of children and the family pet. Included in the scene is a tractor, a vintage Royal Mail post van and a postman collecting mail from a lineside post box. The scene is typically rural and nostalgic, the inclusion of the vintage post van and tractor adding more impact the the countryside scene isolated in the jigsaw pictured below. The locomotive heading the express is Gresley 'A1' class 4-6-2, No.4472 Flying Scotsman.

The jigsaw in picture number three has the same title as the  example  immediatley above. It is made by Ravensburger and produced in the vertical format from the same Walsh painting (or is it?). To accommodate the shape of the Ravensburger picture the tractor, postman, mail van and post box are 'cut off'; hence, it loses the extra impact inherent in the King jigsaw. The cut off point offers much discussion though. A vertical cut on the right hand side of the King jigsaw, excluding the Royal Mail content, and matching the Ravensburger example, appears to be impossible.

Apologies for using this picture for a second time, but it was important in the context of this post.

The headboard 'The Flying Scotsman', complete with defnite article,  was sparingly used from c1950*. The headboard 'Flying Scotsman' was used from c1928 and subsequently remained the most utilized  headboard (with slight shape changes) used on the express. However, the number of the locomotive 4472 and the tender lettering LNER (London & North Eastern Railway), infer a pre-1948 date, for the painting. 1948 was the year when the four UK regional railways (LNER, SR, GWR and LMS) were nationalised as British Railways.
A 1928 photograph of the 'Flying Scotsman' express, headed by the Gresley 'A1' class locomotive No.2547 Doncaster, can be viewed on the Internet (Wikipedia).
* Locomotive Headboards. The Complete Story. Author Dave Peel. (ISBN 0-7509-4462-5)
Posted by David at 16:24

In this post, 21st August 2013, I am using photographs of two jigsaw puzzles both illustrating single track branch lines in steam's halcyon days.

Picture number one features a small, 'H' class 0-4-4 tank locomotive designed by Harry Wainwright of the South East & Chatham Railway, in 1904. The SE&CR was one of the component railways that made up the Southern Railway (SR) following 'grouping' on 1st January 1923. Many of the class were fitted for push-pull working most suited to rural branch lines. The jigsaw puzzle is a 500-piece example from Falcon titled Homeward Journey. The artwork is by transport artist, Mike Jeffries. In the jigsaw picture the locomotive is heading two SR suburban coaches along a single track; the latter runs parallel to a muddy footpath. On the footpath two schoolboys are walking  and chatting. Homeward journey appears to relate to the train, and to the boys. 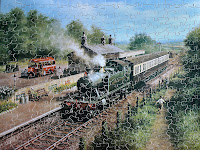 Country Connection is the title of the jigsaw in the second picture. It is a wooden example of 240 pieces but its origin is not clear. It was cut to celebrate the 150th Anniversary of the Great Western Railway (GWR) but by whom, I don't know. It is part of a series of which I have six in my collection, all replicating artwork by Don Breckon. The latter is famous for his paintings of GWR suburban scenes; the inclusion of human interest appears to be important in many of Don's paintings. The station in the painting is not a 'real'  station but similar in style to many suburban, GWR examples. The interpretation of Don's artwork is completely personal. The locomotive is a typical small prairie 2-6-2 tank type, common on suburban GWR lines. It is standing in the station heading two chocolate and cream suburban coaches, with the customary human interest, mischievous boys and an older lady in this puzzle, also included. The red Bedford WLB bus and a car (taxi?) wait in the station yard for transferring passengers.
Posted by David at 17:36

The two puzzles described in today's post, 5th August 2013, are marketed under the B.R. label. The latter to any railway buff is an acronym for British Railways or British Rail but the relationship between the label and jigsaw puzzles is unclear. The four puzzles in the series all relate to the British Railways era however, the steam locomotives all carrying the post 1956 'rampant lion and wheel' logo.  If anyone out there can shed any light on this please contact me.

The first picture shows a 400-piece jigsaw titled No.46102 The Black Watch. The LMS 'Royal Scot' class of seventy 4-6-0 locomotives was originally designed by Henry Fowler, but rebuilt later by William Stanier. No.46102 is pictured speeding past a group of track workers, hauling a rake of carmine and cream carriages. The artist is named as Michael Turner. Studying the signature on the jigsaw painting points me in the direction of the famous aviation and motor sport artist of the same name and similar signature. Born in 1934 in Harrow, Michael may have been persuaded to turn his experienced hand to railway painting. The printing quality of this puzzle picture is better than in the second one below, resulting in denser colour saturation.

Leslie Carr is the famous artist named on the second jigsaw puzzle picture titled No.46245 City of London. The 'Princess Coronation' class 4-6-2 locomotives were outshopped between 1937 and 1948 from Crewe Works. They were designed for the LMS by (Sir) William Stanier and numbered thirty eight on completion; all had been retired by 1964. The first locos to grace LMS lines were streamlined and the previous post describes why. Three 'Princess Coronation' class locos are preserved - No.6229 Duchess of Hamilton, No.6233 Duchess of Sutherland and No.6235 City of Birmingham. The loco in Leslie Carr's water colour painting is speeding through countryside on the west coast main line, in charge of a rake of BR maroon coaches.
Posted by David at 10:32