Coronation and Mallard are two British steam locomotives synonymous with power and speed. The first, a creation of Sir William Stanier of the London Midland Scottish Railway, achieved 114 mph in 1937, a British record. The 'A4' class locomotive designed by Sir Nigel Gresley of the London and North Eastern Railway, achieved 125mph in 1938, a world record for steam locomotion. This figure was acknowledged by Gresley himself although others published an unsubstantiated 126 mph. Today's post, 28th March 2011, comprises two pics showing jigsaws from Falcon's 300-piece Steamtrains series of four puzzles. They all reproduce  the superb artwork of Rob Johnson. A third pic features an information sheet.

The first pic features the jigsaw titled  Princess Coronation Class - LMS.  The 'Coronation Scot', Euston - Glasgow express, was named to coincide with the year of the Coronation of King George VI. It was headed, initially, by Stanier 'Coronation' class 4-6-2, No.6220 Coronation, and a record speed of 114mph was achieved on the inaugural run on 29th June 1937. The location was just south of Crewe on the West Coast Main Line. The 'Coronation' class of locomotives was specially designed for the service. Until 1939 the locomotives and coaches were blue with silver bands but afterwards changed to LMS red with gold bands. The train did not appear after World War II, consigned to history.

Pic number 2 shows the jigsaw titled The Mallard - LNER. Mallard's world record run was achieved on 3rd July 1938 on Stoke Bank, just south of Grantham, on the East Coast Main Line. In the jigsaw the famous 'Streak', No.4468, is hurtling past a local policeman who has stopped cycling to enjoy the experience. It is a picture of contrasts, but also one that epitomises the appeal of steam locomotion.

The third pic shows the information sheet which accompanied each jigsaw in the 300-piece Steamtrains series.


If you wish to view all the photographs published on this blog, either individually or as a slide show, follow the instructions to the right hand side of the blog under the heading 'Picasa Slide Show'. Each photograph is captioned with title, number of pieces and manufacturer.
Posted by David at 19:19

I am returning to the early days of steam locomotion for today's post, 21st March 2011. Two jigsaws in my collection are a perfect fit for this subject.

My first pic shows a 200-piece jigsaw marketed by William Ellis & Co Ltd under the 'Welcom' brand. Titled Discovery of Steam Locomotion the puzzle features the oldest surviving steam locomotive in the world, Puffing Billy. The engine is on display at the Science Museum, London. Built in 1813 by the famous engineer William Hedley, the steam engine was used to haul coal trucks from a mine at Wylam to the docks at Lemington-on-Tyne in Northumberland. It is known to be the first, commercial adhesion, steam locomotive to have operated on smooth rails. The brightly coloured, illustrative style artwork for the puzzle is not signed, unfortunately, but shows the locomotive in a rural setting, possibly en route to the docks.

My second pic shows a superb hand cut, wooden jigsaw by the renowned specialist Sara White. Titled Travelling on the Liverpool & Manchester Railway - 1831, the 430-piece puzzle dates from 1999. The original work was by Isaac Shaw and aquatinted by S. G. Hughes but Sara's jigsaw is from a Raphael Tuck commercial print that replicated the coloured aquatint. The jigsaw features two trains - a first class train with an additional mail coach attached to the rear, and a second and third class example, with open carriages. The first class train is headed by the locomotive Jupiter, built by Robert Stephenson's engineering company in 1831. Jupiter was a locomotive of the 'Planet' class of 2-2-0 locomotives and is incorrectly portrayed with four equal wheels. The second train is headed by the locomotive North Star, built by the same engineers a year earlier and complete with water barrel tender.
Thankfully, manual techniques for manufacturing wooden jigsaw puzzles are still carried out by a number of traditionalists who will hand cut you an elaborate puzzle of excellent quality. However, when one considers that a hand cut jigsaw of 1000 pieces, for example, involving high degrees of skill, patience and creativity will normally take over a normal working day to produce, it doesn't require mathematical genius to work out the expense involved.
Posted by David at 19:48

Today's post, 14th March 2011, is dedicated entirely to two mainline terminus stations in London. Jigsaws depicting stations as a backdrop to a steam locomotive or train are common, but those showing the station as the main focal point, with trains relegated to the background, are exactly the opposite. The two pictures of jigsaw puzzles I have chosen today, show stations and passengers that more or less fill the picture frame.

The first pic features the Gibsons' 1000-piece puzzle titled Going North; Coming South. 'Going North' and 'Coming South' are a pair of paintings by George Earl, originally commissioned by Sir Andrew Barclay Walker, owner of a Liverpool brewery. Victorians had a rather curious affinity for railway stations. The pair of paintings, completed in 1895 and rescued from a Liverpool public house in 1990, show many cameos of Victorian railway station life towards the end of the 19th Century. 'Going North' depicts well-dressed passengers, including Earl himself and members of the Walker family, waiting at Kings Cross Station, Scotland bound. 'The Glorious Twelfth' immediately springs to mind. In 'Coming South' the opposite journey is depicted, passengers waiting at Perth Station for a Kings Cross train, returning to London with their 'prizes'. In both paintings thirty-four sporting dogs of eight different breeds are portrayed, a favourite subject of Earl. The Gibsons' jigsaw cleverly combines both paintings to great effect.

My second shot shows St Pancras Station in the form of a 1000-piece jigsaw made by Ravensburger for the National Railway Museum, York. The title is Going North? St Pancras and it is reproduced from a 1910 Midland Railway Poster by Fred Taylor. This majestic station was completed for the Midland Railway in 1868. It was close to the Great Northern Railway's Kings Cross Station and was built because of massive delays in approaching Euston Station, previously used for London-bound passengers. A new line from Bedford was built for the opening of St Pancras. Because Taylor's artwork was commissioned for a poster, the fine detail shown in Earl's paintings was not required; also, because the scene is of a panoramic nature, it has slightly less impact.
Posted by David at 20:05

I know that 'Old Workhorses' is a worn out cliche but there is nothing better to describe the two jigsaw puzzles I have chosen for today's post, 9th March 2011. Farming, especially ploughing or the harvesting of crops,are popular subjects for foregrounds in pictures of steam railway scenes. Many artists have used this pairing of steam train and farming to add pictorial impact to their work and jigsaw manufacturers have not been slow to reproduce it. 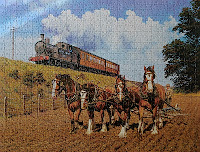 The first pic shows a 1000-piece jigsaw from Waddingtons titled, appropriately, Old Workhorses. The puzzle compares older means of both travel and farming and is reproduced from a Malcolm Root original painting. This jigsaw is not as easy to assemble as others described in previous posts. Many pieces replicate colour and texture, particularly those that make up the ploughed field, making it a time consuming exercise to complete. Sold by Woolworths before the company's demise in December 2008, the puzzle features a T.W.Worsdell Class 'F4', 2-4-2T tank, No. 67211, heading two small suburban coaches along a raised embankment. The scene is set in early British Railways days. In the foreground a farmer ploughs his field using four magnificent shire horses to pull the plough.

Another fine example in this category, reproduced from a Trevor Mitchell canvas, is the JR Puzzles 500-piece example titled Homeward Bound, part of the Days Gone By series. A Gresley 'C9' class 4-4-2 locomotive, No.2171 of the London and North Eastern Railway, (LNER) is shown heading a rake of Gresley teak coaches. On an adjacent road an old Burrell steam traction engine with two men on board and two trailers in tow, plods along, heading away from a day on the farm.

The summer scenes above, produced by both artists, radiate tranquillity, all that is best in the UK countryside.


NOTE: JR Puzzles are now owned and distributed by James Hamilton Grovely Puzzles Ltd.,  -  for details, the email address is info@jhgpuzzles.co.uk and the website is jhgpuzzles.co.uk
Posted by David at 12:34

They were called goods trains in my day but most people call them freight trains today. Whatever you call them, today's post, 4th March 2011, features photographs of jigsaw puzzles showing such trains. For some reason that I don't understand, freight trains are not widely covered by jigsaw manufacturers, passenger examples outnumbering them by a huge margin. I have chosen two pictures from my collection to illustrate the post title.

Pic number one shows a 500-piece puzzle from Moat House Products. In the pic one of Charles Collett's 4-6-0 workhorses, No.5904 Kelham Hall, coupled to a large eight-wheeled tender, is heading freight vans under a bridge on Rattery Bank. The 'Hall' class of mixed traffic locomotives came into service on the Great Western Railway in 1924 and over 250, including modified versions, were built.  David M. West produced the original artwork for the jigsaw, which is one of a series of six.

The second pic shows a 500-piece wooden puzzle from Wentworth. Barry Freeman's original painting of The Haymarket Wanderer has reproduced superbly as a jigsaw. The puzzle is available in several different sizes from Wentworth and depicts a Arthur H. Peppercorn 'A1' class 'Pacific', No.60160 North British, in BR blue livery, heading a long goods train of mixed wagons and vans. The setting is Welwyn North Station.
Posted by David at 23:03