As the title clearly states this post, 28th July 2014, features a jigsaw puzzle from Philmar with inter-changeable centres. 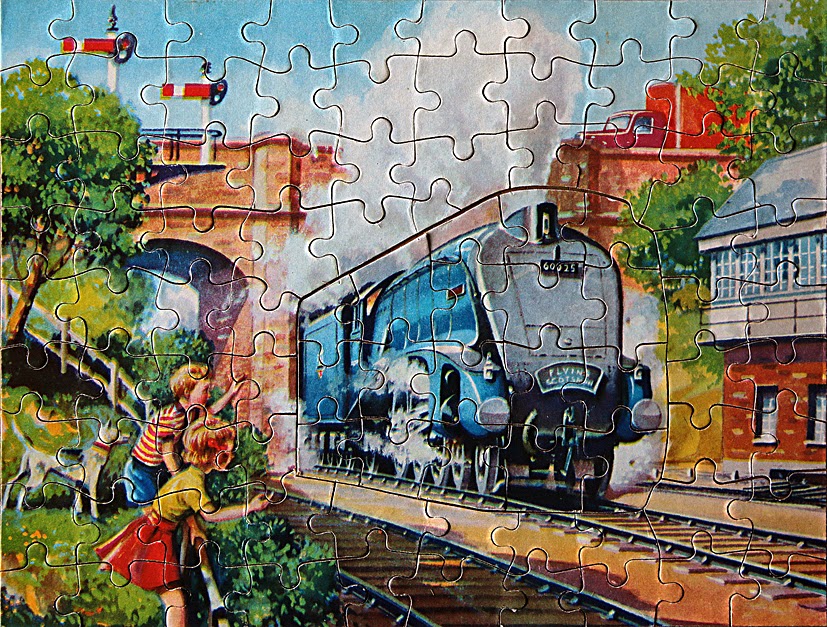 The first pic shows the 72-piece surround with the first core of 18 pieces. The latter in this case is a BR (ex LNER) 'A4' class 4-6-2 of (Sir) Nigel Gresley, No.60025 Falcon. The locomotive is pictured heading the famous 'Flying Scotsman' express. The surround is extremely pictorial with signal box, signal gantry and road bridge to the fore. The main focus, however, is the two children waving to the train from a line-side fence, accompanied by the family dog. A lorry provides additional interest as it approaches the bridge in the background.

Although made primarily for children, this puzzle is a 'must have' for inclusion in thematic, steam train jigsaw collections.
Posted by David at 14:45

By the 1820s around 2,200 miles of canal had been built in the UK. The opening of the Stockton and Darlington Railway in 1825 and the Liverpool and Manchester Railway in 1830 proved to be decisive moments in the change from canal transportation to that of the railways. In terms of transport time, it was generally accepted that canals could compete with railways at the speed of a horse drawn barge. But railways could and did travel much faster. From the above dates the superiority of railways was accepted unanimously.


A steam train on a main line beside or crossing a picturesque canal in a tranquil British countryside setting - what artist could ignore such a scenario? Not many it seems. Nostalgia and serenity emanate from the three jigsaw pictures I have chosen to illustrate this particular transport combination.

The first picure features a jigsaw of 1000 pieces by Ravensnsburger titled Canalside Memories. In Trevor Mitchell's artwork, Chirk Aqueduct, built by Thomas Telford in 1801 to carry the Ellesmere Canal across the Ceiriog Valley, is featured running parallel with a higher railway viaduct. A large, cargo narrow-boat dragged by a working horse is pictured traversing the aqueduct and pedestrians are included on the aqueduct footpath for effect. A ‘Castle’ class 4-6-0 locomotive is pictured hauling a passenger train across the railway viaduct. The narrow boat Gifford included in the picture is preserved at the Ellesmere Port Boat Museum, but can be spotted occasionally on the UK canal network. She was built in 1926 as a tank boat for Thomas Clayton (Oldbury) Ltd., and used to carry bulk liquids such as creosote, crude oil and tar on Midlands' Canals. She was restored in 1971.

Classic DeLuxe also issued jigsaws in this category in 2008, duplicating paintings (2002) by Kevin Parrish. My second picture shows one of these puzzles, of 500-piece example, titled Canal Crossing. Depicted are a small motorboat or narrowboat  moored on a canal bank with a small boy in charge. He is waving at the driver of a small GWR locomotive (a 'Manor' class 4-6-0?) as it crosses a bridge above the canal, heading a rake of GWR chocolate and cream passenger coaches.

The third photograph features the second 500-piece jigsaw from Classic Deluxe titled Canal Cruise. This is another from Kevin’s portfolio of 2002. This and the previous puzzle capture the empathy between canal narrow boats and steam locomotion perfectly. In this puzzle a blue and black liveried narrow-boat, Water Lily, with at least three people on board, is travelling serenely along a tree-lined canal at sunrise (or sunset) having just passed beneath a brick, arched bridge. On the bridge, a British Railways (BR) 'Standard' 2-6-2T tank locomotive of George Ivatt is shown heading maroon coaches.
Posted by David at 15:58

The Wentworth company was only formed in 1994 in Malmesbury, Wiltshire but has achieved global recognition in its short existence. Each wooden puzzle includes unique, specially shaped ‘whimsy’ pieces some of which, typically, relate to the jigsaw picture. A huge number (over 100) of steam train titles are included under the Wentworth name in my inventory of steam train puzzles, a remarkable number. Famous artists such as Barry Freeman and Malcolm Root are strongly represented. Standard sizes range from 250-1500 pieces but smaller examples are also made.

The first picture features a 250-piece puzzle replicating artwork by Malcom Root. Titled Coasting Down to Kyle the jigsaw depicts a scene in the Highlands beside Loch Carron. A Stanier 'Black Five' is coasting towards the terminus at Kyle of Lochalsh, the main ferry port for crossing to Skye, before the Skye road bridge was opened in 1995. The locomotive in the picture is preserved and Malcolm painted it for one of the co-owners. The locomotive was the 184th departure from the famous Woodham Bros'  Barry Scrapyard* in January 1987, having arrived 21years earlier. It is now under restoration at the Colne Valley Railway in Essex.

The second picture shows another 250-piece Wentworth puzzle titled Corfe Station. The artwork is by Gerald Savine - both Malcolm Root and Gerald are members of the prestigious Guild of Railway Artists (GRA). The jigsaw picture features a BR ‘Standard’ class ‘4’ locomotive, No.80078, leaving Corfe Castle Station in Dorset with a passenger service. The scene is entirely rural with the famous castle providing a historical backdrop. The scene has always been popular with photographers and artists, up to the present day. The Swanage Railway currently hosts the 2-6-4T locomotive, the 84th engine rescued from Barry Scrapyard* in 1976, following arrival for breaking up in 1966.

* A fantastic book, Barry Scrapyard : The Preservation Miracle by Alan Warren, is available on many Internet book sites and is highly recommended.
Posted by David at 11:30