Steam train enthusiasts prefer to see their icons in a railway infrastructure setting but manufacturers of jigsaw puzzles cater for more cosmopolitan tastes. Jigsaws depicting a steam hauled train in a picturesque rural environment are popular with jigsaw enthusiasts of many persuasions, and manufacturers are quick to target the sales potential of this pairing. In today's post, 30th August 2011, I am using two pictures of jigsaw puzzles that fit the rural steam genre.

The first picture shows a 500-piece puzzle by Waddingtons titled A Country Life. The superb artwork is by Don Breckon. In the picture a small branch line train on the Great Western Railway (GWR) is relegated to the background while integrating perfectly into a strictly rural scene. A small 'Manor' class 4-6-0 locomotive, No.7807 Compton Manor, is shown heading GWR chocolate and cream carriages. A country cottage and adjacent small-holding, with goats, chickens, ducks and a horse to the fore, complete the picture. This is certainly one of those jigsaws that radiates peace and serenity from a quiet corner of the British countryside.

The second picture, of a 636-piece 'Panoramic' Gibsons puzzle, shows a British countryside farming scene titled Bringing in the Barley. The jigsaw is reproduced from original artwork by Derek Roberts. At the head of at least two, British Railways (BR) maroon, suburban passenger coaches is an ex-GWR, 5700 class 0-6-0 pannier tank (No.7725?).  In the foreground - a cut barley field - a picnic appears to be taking place including adults, a child and the obligatory dog. A bright red tractor, attached to a crop-filled cart, and a Morris Minor Traveller car are also included in a busy scene. Two other small children wave at the train from a trackside gate and the engine driver reciprocates.

Both of the locomotives shown in the above jigsaw photographs were common on GWR and BR Western Region branch lines serving countryside communities. Both jigsaws depicted would appeal to steam train officianados and jigsaw enthusiasts with broader affiliations.
Posted by David at 16:14

For today's post, 23rd August 2011,  I am using two photographs of small jigsaw puzzles from the famous G. J. Hayter stable, more famously known as Victory. Both puzzles are small and probably aimed at children, but for serious collectors of steam train jigsaw puzzles, they are a must have.

The first picture features the famous experimental 4-6-4 locomotive of (Sir) Nigel Gresley as a 45-piece Victory jigsaw puzzle. The locomotive was placed in class 'W1' and numbered 10000. Because of the secrecy surrounding her ground-breaking design and development, she became known as the 'Hush Hush' locomotive. After entering service in 1929 from Darlington Works, the locomotive suffered many problems and, as a result, was completely rebuilt in 1936. She re-entered service on the LNER a year later as a class 'A4' look-alike, but retained the 4-6-4 wheel configuration. In BR days she was renumbered 60700 and finally withdrawn from service in 1959. The jigsaw shows the rebuilt locomotive in a works environment but is untitled; the artwork was by T. E. North.

The second picture features a 'Royal Scot' class 4-6-0 locomotive as a 45-piece Victory jigsaw titled Merseyside Express. The parallel boilered class was designed by Henry Fowler and entered service in 1927. The locomotive in the picture is LMS No. 6117 Welsh Guardsman; she is shown heading LMS maroon coaches. The artist is from the 'F. Moore' range of the Locomotive Publishing Company. The class of 70 was rebuilt with tapered boilers by (Sir) William Stanier/George Ivatt from 1943; smoke deflectors were added later.
Posted by David at 21:10 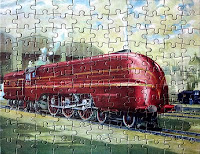 The title of today's post, 18th August 2011, is self explanatory. I want you to study the pictures of the early, pioneering locomotive of George Stephenson (left) and an example of a 1943 'giant', designed by Sir William A. Stanier (right), and come to your own conclusions.

It is doubtful if communities have ever been as involved with railways, as the thousands of people who turned up to watch the opening of the Stockton & Darlington Railway (S&DR) in 1825 or the Liverpool & Manchester Railway (L&MR) in 1830. Similar crowds had gathered to witness George and Robert Stephenson's Rocket claim the £500 first prize at the L&MR Locomotive Trials, at Rainhill, in 1829.  At all of these events, the physical presence of steam powered 'monsters' caused fear among some beholders, curiosity among others and admiration among the majority. A few, particularly landowners and those with canal interests, who realised that they might lose out financially, showed contempt. The L&MR is well represented in jigsaw manufacture, the S&DR, less so.

George and Robert Stephenson's north-east engineering works also won the right to build the initial locomotives for the L&MR. A superb painting by Alan Fearnley, Rocket at Rainhill, reproduced as a 1000-piece jigsaw by Waddingtons and titled Stevenson's Rocket, (with incorrect surname spelling) is shown above. The painting / jigsaw expertly conveys the crowd's emotions displayed at the Rainhill Locomotive Trials, of 1829.

The battle for speed and supremacy between the East Coast Main Line and the West Coast Main Line for the London to Glasgow / Edinburgh rail traffic, (which had begun as early as1888), eventually resulted in huge 4-6-2 locomotives being designed by (Sir) Nigel Gresley and (Sir) William A. Stanier, respectively. The latter built his 'Princess' and 'Princess Coronation' class locomotives in response to Gresley's 'A1/A3' and 'A4' class equivalents. Stanier's class of thirty-eight, 'Princess Coronation' 4-6-2 or 'Pacific' locomotives, were built over many years, 1937-1948, as World War II intervened. The picture I have chosen shows a 120-piece jigsaw titled Ready for the Run. Illustrated is one of  Stanier's 'Princess Coronation' class locomotives, No.6248 City of Leeds, in the maroon and gold streamlining of the London Midland & Scottish Railway. However, the jigsaw manufacturer / brand name (Ian Allan?) and artist are unknown to me.
Posted by David at 19:22

In this post, 12th August 2011, I am comparing a 'King' class locomotive, as reproduced in an early British Railways' era painting and modern jigsaw puzzle, with a recent photograph of the same locomotive. 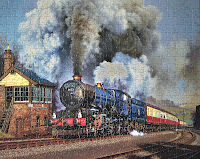 The first photograph features a wooden jigsaw puzzle of one of Charles Collett's giant 4-6-0s, No.6023 King Edward II, reproduced from a Malcolm Root painting. This 500-piece puzzle, titled Cornish Riviera 6023, was made appropriately by King International of Holland, and is still in production. The locomotive is heading the famous 'Cornish Riviera' express at the equally famous (or infamous) Dainton Bank, the third stiffest incline on the British mainland. The 2-miles long bank is situated on the GWR main line beginning at Stoneycombe in South Devon and includes Dainton Tunnel. To storm the incline the locomotive is shown at full power in Malcolm's painting, belching out exhaust of almost volcanic proportions from its copper-capped chimney. The signal box and quarry sidings are authentic. The BR blue colour for large express locomotives was trialled in 1948 and a slight variation was used from 1949. The GWR were unimpressed, however, and reverted to their own 'Brunswick Green' a short time later. 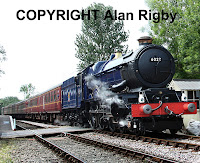 For comparison, as I don't have a  modern jigsaw equivalent in my 400-strong collection, I have used a photograph from a friend of mine, Alan Rigby, who photographed the locomotive this year following its return from restoration. Alan took the shot on the 5th June 2011 at Thuxton on the Mid Norfolk Railway where it was being 'run in'. The locomotive was purchased in 1989 by the Great Western Society from previous owners Harvey's of Bristol (makers of the famous of sherry); the cost, £16,000. She was moved from Bristol to Didcot Railway Centre, by train, for restoration and first appeared for public viewing, in steam, at Didcot on 2nd and 3rd of April 2011. The locomotive livery is almost identical in both images.
Posted by David at 11:40

The Gresley, streamlined 'A4' class of 4-6-2 locomotives have been very popular with artists and jigsaw manufacturers over many years. Some puzzles featuring these 'streaks' have already appeared on our blog. Today's post, 5th August 2011, includes two photographs of jigsaws depicting the same ex-LNER 'A4' - No.60034 Lord Faringdon. This locomotive (formerly LNER No.4903 Peregrine), was one of  thirty five 'A4s' built at Doncaster Works between 1935 - 1938.

Pic number one shows an Ian Allan jigsaw puzzle of 200 pieces. The 'A4' locomotive is heading the 'Tees-Tyne Pullman', a luxury express that ran between Kings Cross and Newcastle-upon-Tyne from c1948. As my jigsaw is not boxed I am not sure of the exact title of the puzzle or the original artist.

The second pic shows a Good Companion jigsaw of 400 pieces. The  same locomotive, although liveried in BR blue, is heading 'The Elizabethan' express. This was a non-stop service that ran between Kings Cross and Edinburgh in celebration of the 1950's Elizabethan era. The jigsaw is simply titled The Elizabethan and the artist is T. E. North.
Posted by David at 23:34