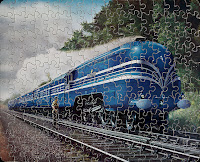 The ‘Coronation Scot’ of the London, Midland & Scottish Railway (LMS), was named to coincide with the year of the Coronation of King George VI in 1937. On its inaugural 'press' run the train was hauled by a Stanier ‘Coronation’ class 4-6-2 No.6220 Coronation and reached a UK record speed of 114mph. No.6220 was one of five locomotives specially designed for the service, although other class members followed later. Until 1939 the coaches and locomotives were light blue with silver bands but afterwards changed to LMS red with gold bands. Carriages were custom built with their own streamlining and air-conditioning as standard. The express carried roofboards and tailboards but did not display a headboard. The ‘Coronation Scot’ train did not reappear after the war, consigned, unfortunately, to history. Picture number one shows the express being admired by a track worker as it thunders by at full throttle. The jigsaw is a 150-piece wooden example from Victory but the artist is not named.

The ‘Cornish Riviera Limited’ of the Great Western Railway (GWR) resulted from an improved Paddington to Penzance (via Plymouth) service in 1904 and the returns from a subsequent competition to find a name for this excellent express. Originally the train was to be named ‘The Riviera Express’ the name chosen from the competition entries but this was changed to ‘Cornish Riviera Limited’ in the 1906 timetables. Carriages were ‘slipped’ at Westbury, Exeter and Taunton for other destinations. A headboard, 'Cornish Riviera' was only introduced in 1951 by BR; the headboard 'Cornish Riviera Limited' was used five years later. Some pictures and jigsaw puzzles use the title 'Cornish Riviera Express'; this headboard was used from 1958.* This crack GWR express has always been popular with jigsaw manufacturers such as Victory, Falcon and Chad Valley, and more recently, King. The picture shows a very recent Otter House, 1000-piece jigsaw titled Life in the Country  replicating Stuart Booth's original artwork. A 'King' class 4-6-0 locomotive  No.6029 King Edward VIII, designed by Charles Collett and sporting the 'Cornish Riviera Limited'  headboard, (c1956) is travelling over a causeway between two bodies of water. Small boats and a family of mute swans add to an idyllic coastline setting. This locomotive was originally named King Stephen in 1930 but renamed in 1936.
Congratulations to Otter House for producing a 'space saving' smaller box to house the jigsaw pieces. Some manufacturers use or have used huge, totally over-sized boxes to house the larger puzzles leading to a shortage of shelf space for collectors such as myself.
* For details of all headboards used in BR and pre BR days, the superb book by Dave Peel,  Locomotive Headboards,The Complete Story  (ISBN 0-7509-4462-5) is a must. The book is clearly written and illustrated with superb photographs and illustrations.
Posted by David at 11:09