The landscape format is, and always has been, the dominant shape for jigsaw puzzles and easily accommodates a picture of a train or locomotive. The vertical format is quite rare in comparison but can produce a very effective puzzle. The two puzzles I have chosen from my collection, for today's post, 24th September 2011, emphasize the latter point. 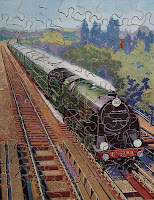 The first picture shows a Victory wooden puzzle of 100 pieces titled Southern Railway Express "Bournemouth Limited", from the mid 1930's (T6). The express was introduced in July 1929 and ran from London's Waterloo Station to the popular Dorset seaside town. The service was curtailed during World War II but reinstated in 1945, without its name. However, the origin of the express was in a 1911 service  when the London & South Western Railway began a Waterloo - Bournemouth express until the outbreak of World War I. The 'Bournemouth Limited' was renamed 'The Royal Wessex' in 1951 under British Railways. The locomotive heading the Southern Railway (SR) green passenger stock in the jigsaw picture is SR 'King Arthur' class 4-6-0, No 789 Sir Guy. The class was originally designed by Robert Urie of the London & South Western Railway between 1919 and 1922. From 1923 the Chief Mechanical Engineer (1923-37) of the SR, Richard Maunsell, redesigned the class and built additional locomotives. The class eventually totalled seventy four. 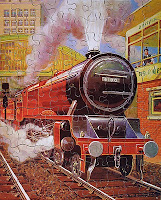 The second picture shows a 100-piece wooden puzzle from Bes-Time titled The Royal Scot. The jigsaw picture has been painted in a poster-like style, with lots of impact, but neither the artist or details of the jigsaw manufacturer / retailer are known to me. The class of seventy 4-6-0 locomotives were originally designed by Sir Henry Fowler. The first fifty were built by the North British Locomotive Company in 1927 and the final twenty by British Railways Derby Works in 1930. However, the class was completely rebuilt between 1943 and 1955 by Sir William Stanier and George Ivatt. The location in the jigsaw picture appears to be a large terminus station (Euston?); a signal box is included next to the line.

The picture in jigsaw number one incorporates a wider angle and a higher viewpoint  than jigsaw number two and hence, may appeal more to pictorialists.
Posted by David at 16:45


Today's post, 14th September 2011, features two photographs of jigsaws made by different manufacturers, the latter not as well known as others described in previous posts.

The first pic shows a wooden Lumar puzzle of 220 pieces from c1933. 'The Flying Scotsman' express train is featured steaming through a very picturesque landscape. The jigsaw title is simply The Flying Scotsman; it is incorporated into the puzzle as a striking legend. The locomotive in the picture may be one of (Sir) Nigel Grsley's class 'A1' or 'A3' 4-6-2s. The famous express occupies a small part of the overall picture but is an integral part of it. The artist is not known to me. The name Lumar was a shortened form of the company name, Louis Marx Ltd., of London.

The second picture shows an untitled wooden, Intalok Zig-Zag jigsaw of about 150 pieces, part of the Winners series. The locomotive heading what appears to be London & North Eastern Railway (LNER) teak coaches is of 4-6-0 wheel configuration. Can anyone identify it? If so please email me (email address is at the top of the blog). The identification of both location and artist is also unknown to me but the artwork is strong, poster-like and reproduces as a fine jigsaw puzzle. Zig-Zag was a London-based company manufacturing a huge range of jigsaws in the early 20th century. The Intalok Zig-Zag branded puzzles probably resulted from a joint venture with the Richard Art Company Ltd.; some were branded as RACO.
Posted by David at 14:48

Busy railway junctions have proved to be very popular with artists and jigsaw manufacturers over many years. A location with many railway lines, converging or otherwise, offers the potential for more traffic and the two jigsaws chosen from my collection for today's post, 8th September 2011, show this potential to real effect. 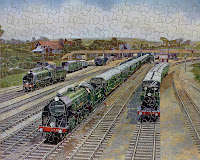 Picture one shows one of my favourite puzzles of this type, a 200-piece wooden example from Victory titled Southern Railway Atlantic Coast Express. The location is Seaton Junction, East Devon but the artist is not named. The painting appears to be a direct copy, in colour, of a monochrome photograph in the collection of the Royal Air Force Museum. The photograph, titled A busy scene at Seaton Junction, is accompanied by the following legend "Southern Railway King Arthur class N15 locomotive E451 Sir Lamorack with an express passing S15 824 light engine and 0-4-2 D Class on a local train". The same junction is featured in Barry Freeman's painting Heavyweights at Seaton reproduced as a 1000-piece puzzle by Gibsons - this puzzle was featured in the post of 13th July.

The Busy Junction, a 400-piece jigsaw from Good Companion is shown in the second picture. The jigsaw shows a busy East Coast Main Line with 'A1' class locomotive No.60130 Kestrel hauling a passenger train passing a similar train hauled by a main line diesel locomotive. The artist is not named**. Above, a long freight train crosses the main line over an arched girder bridge linked to a long brick viaduct. The locomotive is a mixed traffic type but the number, on the smokebox door, is unclear. It may be No.60800 Green Arrow, one of (Sir) Nigel Gresley's 'V2' class 2-6-2 workhorses. Arthur Peppercorn, Chief Mechanical Engineer of the London & North Eastern Railway from 1946 until nationalisation of the railways in 1948, designed forty-nine 'A1's, delivered after nationalisation.

** I have been reliably informed by Jez Gunnell that the artist is T. E. North. Jez is the owner of the original artwork signed by the artist. Thanks for the information. This adds to the many other pieces of North's artwork reproduced by Good Companion.
Posted by David at 09:29