In this post, 20 September 2018, I am describing a jigsaw puzzle from Gibsons which is sold in a small gift box, rather than the standard, metallic blue box.

The jigsaw, titled Crossing the Ribble, is of 500 pieces and features the superb artwork of GRA (Guild of Railway Artists) member, Stephen Warnes.

Helwith Bridge (spelled incorrectly on the box) is a popular location on the Settle to Carlisle railway line, frequented by photographers. The famous line is  affectionately referred to as 'the long drag'. The 5-arch bridge spans the River Ribble in Upper Ribblesdale around 5 miles from the market town of Settle.

In Stephen Warnes' painting, the Fowler/Stanier rebuilt 'Royal Scot' class, 4-6-0 locomotive No.46113 Cameronian, is pictured passing over Helwith Bridge, in the early 1960's. The mountain in the background, I think, is Pen-y gent (email me if I'm wrong).

This post, 6th September 2018,  features a jigsaw puzzle that fits perfectly into the blog title even though it is single railway carriage with no steam engine in sight; but what a carriage.... Titled Queen Victoria's Royal Saloon, the jigsaw is a 500-piece example produced for the National Railway Museum, York, by Country House Treasures. 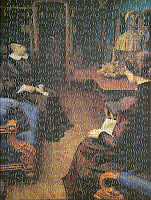 Towards the end of the 19th Century, the UK steam railway network had grown at a rapid rate, and most of the major Railway Companies in the UK had built elaborately decorated carriages for use by the Royal Family. Queen Victoria's London and North Western Railway Saloon was originally built in 1869 as a special pair of coaches, one each for day and night. The cost was £1,800 and Victoria paid £800 of her own money towards the cost. In 1895 the two carriages were rebuilt and merged into a single unit. The jigsaw photograph shows a view of the main interior lounge; all of the colour schemes were chosen by the Queen herself. The L&NWR Saloon was a personal favourite of the Queen and in 1897, was used for her Diamond Jubilee Celebrations. The Saloon became a major exhibit in the National Railway Museum, in 1975. A replica was installed into an exhibition at Ballater Station on Royal Deeside, near Balmoral, in 2008. On the 'Wapedia-Wiki:British Royal Train' website, the purposely constructed Royal Train carriages are listed in chronological order through to our present Queen's Silver Jubilee year, 1977.
Posted by David at 17:09