This post, 29th May 2014, comprises two photographs of wooden jigsaw puzzles which occur infrequently on the secondary market 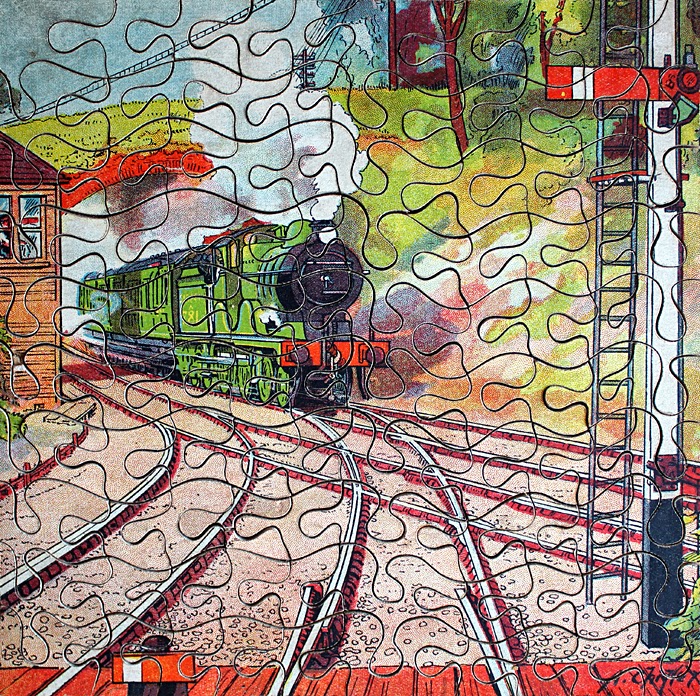 The first picture features a jigsaw of 80-pieces replicating an original illustration by A. Chigley. The label on the box reads 'The Arrow Series' but I'm not sure if this is the brand or series name. A title is also absent. The wooden puzzle is of excellent quality and shows a 4-4-0 locomotive originally designed by Harry Wainwright for the South East & Chatham Railway (SE&CR). The Wainwright designs were further modified, eventually by his successor as Chief Mechanical Engineer of the SE&CR, Richard Maunsell in 1913, and put into production. The Maunsell designs included No.781 shown in the jigsaw picture but this locomotive was one of ten built by the Borsig company of Berlin, incorporating some German ideas. They arrived in kit form and were assembled at Ashford Works. (Twelve were also built in Britain by Beyer Peacock). The locomotive was withdrawn from service in 1959 and later, scrapped.

The attractive puzzle picture shows the locomotive heading green passenger stock on a main line, passing under a road bridge with parts of a signal box included on the left and a signal on the right. 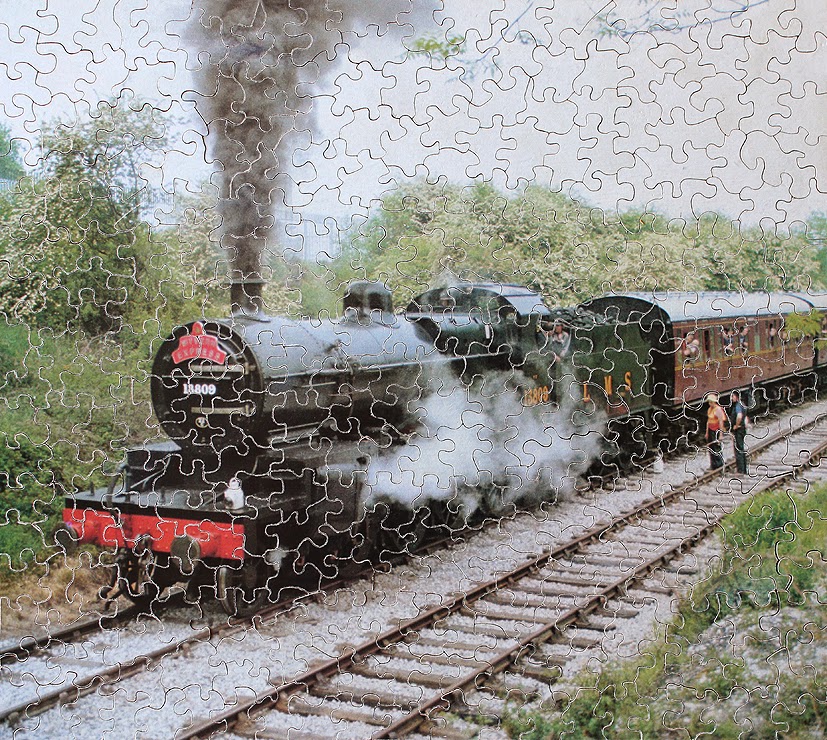 A fine, steam train jigsaw of 329 pieces titled Wyvern Express is shown in the second picture.The wooden puzzle was originally from the Tanglewood Jigsaw Club. It is packed in a cloth bag printed with the club name, puzzle title, number of pieces and size. Each piece has been painstakingly stamped on the back with the puzzle's code number so if a piece went astray one could tell instantly which puzzle it belonged to. As usual with a jigsaw club puzzle, a reference picture is not provided. I have found it difficult to research Tanglewood Jigsaw Club puzzles but a Mrs Barclay crops up occasionally. Was she possibly the president of the club? Was she also a jigsaw cutter? Both "push fit" and "interlocking" puzzles were made. They were never sold in boxes only bags and no picture to help as described above. Vintage puzzles date c1930 to about 1960.

The jigsaw picture features a Somerset & Dorset Joint Railway (S&DJR) locomotive of 1914, a class '7F', 2-8-0 design of Henry Fowler. The S&DJR was owned by the Midland, and London and South Western Railways. I can find little information on a 'Wyvern Express'. I suspect it is a Heritage Railway title as the locomotive in the picture, No.13809, is preserved on the Midland Railway at Butterley (No.53809). Another photograph on the Internet features the ex LMS Fowler class '4F' 0-6-0 tender locomotive, No.4027, displaying a 'Wyvern Express' headboard. Another  Internet picture shows a GWR pannier tank 0-6-0 locomotive with the headboard 'The Wessex Wyvern'.

If anyone has any information about the points raised in these jigsaw puzzles, please contact me - my email address is at the top of the blog.
Posted by David at 14:04

For today's post, 20th May 2014, I am using two pictures of cardboard jigsaws made by Philmar.

Philmar, formed c1937 began jigsaw production in the 1940’s and often used alternative brand names for particular series of puzzles: the Valiant name was common. Many steam train jigsaws of wood and cardboard were made between the 1940's and the 1970’s. The portfolio of steam train puzzles was fairly extensive and included many examples featuring preserved railways. 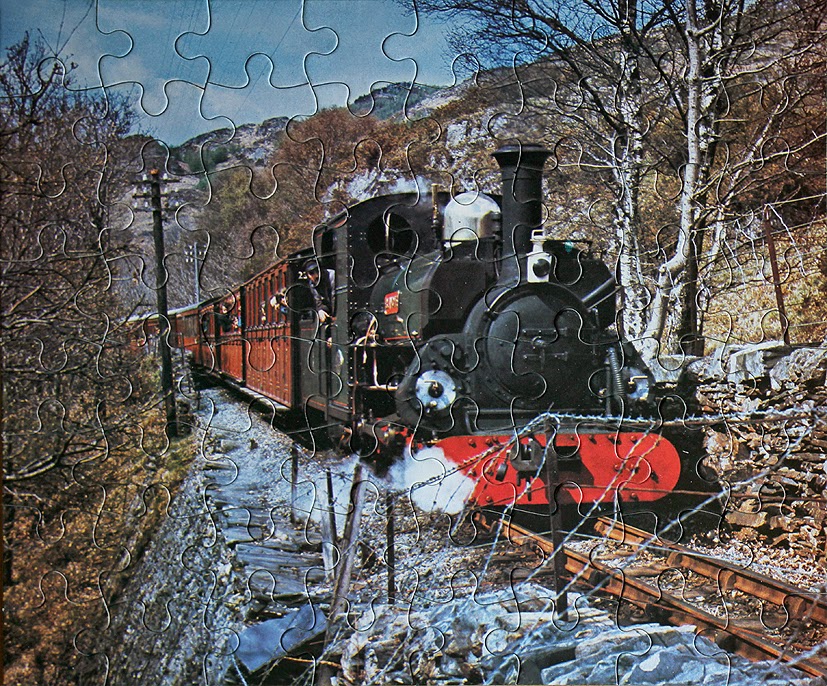 Unfortunately I cannot identify the locomotive in the jigsaw photograph but it may be the Hunslet 2-4-0 STT, Linda, made in 1893 (does anyone know for sure?)

The second picture shows a locomotive in the national collection at the National Railway Museum in York. The 64-piece puzzle from the same Philmar series of four described above includes this example featuring the ex London & North Western Railway (L&NWR) 2-4-0 locomotive, No.790 Hardwicke. The puzzle replicates a photograph of the locomotive in its preservation days heading a rail tour between Carnforth and Grange-over-Sands in May 1976. The location was Silverdale Station. The locomotive became famous during the 'Races to the North' (West Coast route versus East Coast route) when it ran from Crewe to Carlisle at an average speed of over 67mph in 1895.

A Brace of Falcons

Two jigsaws in a single box are the subject of today's post, 5th may 2014. Steam Travel is the title of the duo from Falcon but each puzzle also has its individual title.

The first picture features a 500-piece puzzle titled The Crossing. Depicted is GWR ‘Castle’ class 4-6-0 locomotive, No.4082 Windsor Castle, passing a signal box and over a gated level crossing, heading old style brown and cream clerestory coaches. In the opposite direction is an approaching 0-6-0 pannier tank of the ‘2721’ class, No.2790. This locomotive is heading freight wagons. On the road, on opposite sides of the crossing are a 1919 Thornycroft open air, double-decked bus and a vintage car. The artwork is by Robert Nixon. No.4082 was renumbered and renamed No.7013 Bristol Castle in 1952. The reason for the change was that No. 4082, the official Royal engine, was being overhauled at the same time that a locomotive was urgently required for the funeral of King George V. Both locos thus swapped identities. A haywain is clearly visible in the corn field behind the railway.

Not surprisingly, Robert’s artwork for the second 500-piece jigsaw titled, The Red Dragon, features ‘Castle’ class No.7013, Bristol Castle - a duo in more ways than one. The locomotive is pictured hauling the famous Paddington to Carmarthen express under a small road bridge on which three, late 1940’s to early 1950’s road vehicles are clearly visible. On the bridge are a coach (Bedford OB?), a Royal Mail van and a car. An 0-6-0 pannier tank is included in the picture but cannot be identified.