Today's post, 28th November 2011, is dedicated to the book bearing the same name as the blog. I have several copies of the book, first published in 2007, on offer . The two photographs below show two of eight photographic pages, designed in a montage style, illustrating thirty-five puzzles in total. They are fully complemented with over 30,000 words divided into several sections. Included in the latter are "A Summary of Jigsaw Puzzle History", "Thematic Collecting", "Railway Artists", "Classification" and "Famous Locomotives and Headboards". The book is based on jigsaws depicting British steam railways only. 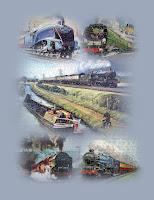 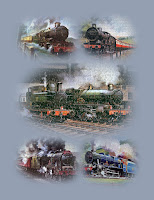 The book is primarily aimed at collectors of steam railway jigsaw puzzles, serious or otherwise. It is also aimed at those people without any passionate affinity for railways, who just like to reminisce about times spent on steam-hauled trains and assemble the odd jigsaw puzzle or two. Even enthusiasts of general pictorial jigsaws may find the book interesting. After all, railways and glorious lanscapes were inseparable in the steam age and there are many jigsaw examples reflecting this combination to consider. Railway officianados and collectors of railway art may also be attracted to the book as I believe there is much common ground between everyone with an interest in steam railways, whatever their focus.

If of interest please send enquiries to the email address at the top of the blog. The cost will be £15.49 inclusive of postage/packing; payment can be by cheque or postal order or via my PayPal account.
Posted by David at 15:08

For today, 22nd November 2011, I am using two photographs of similar jigsaw puzzles and invite you to differentiate between them before reading the text.

One drawback to steam railway jigsaw collecting is that several manufacturers reproduce the same artwork. For instance John Austin's Imminent Departure has been made by Gibsons (1000pcs), Waddingtons (1000pcs) and W. H. Smith (1000pcs).  There are many other examples I could describe. In some cases a manufacturer  produced a jigsaw puzzle in different formats or within different series titles. For example Gibsons produced some puzzles as part of the 500 or 1000-piece Heritage series, as part of the wide-format 636 piece panoramic series and as a standard 1000-piece puzzle. Two Weeks in a Welsh Town was one of them. In these cirumstances a collector has to make important decisions normally based on cost. Do you purchase just one jigsaw by a single manufacturer, buy a copy of the same puzzle from each manufacturer or complete the set of copies of the same puzzle offered in different formats / series  by each manufacturer. You pay your money and make your choice, as they say.

If money is no object another alternative is possible; to collect every single steam train jigsaw made by each manufacturer. In the case of Wentworth, for example, because this company makes each jigsaw in several sizes, this may be unrealistic. In my inventory nearly eighty puzzles showing steam trains are attributed to Wentworth. When one considers that each one is made in several different sizes a collection of over 400 puzzles would be accumulated from this company alone. As I said - unrealistic, unless you are an eccentric millionaire. 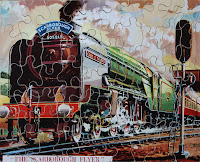 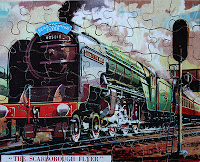 The two puzzles shown are both wooden examples from Philmar and they illustrate the dilemma facing serious collectors. The first is a 50-piece puzzle and the second is a 60-piece equivalent. The title of both is Scarborough Flyer and the artwork is by T. E. North.
Posted by David at 13:44


Its quite a while since I described jigsaws made for children but the two pics in today's post, 15th November 2011, certainly fit that description. They are both of 64 large pieces made by Philmar. In a collection of steam railway jigsaw puzzles, such as my own, these children's examples must be included as the locomotives ilustrated/photographed are full scale and original. 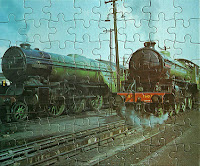 The first photograph shows two London & North Eastern Railway (LNER) locomotives standing side by side. On the left is No.4771, Green Arrow. This locomotive is from the famous 'V2' class designed by Sir Nigel Gresley. It is of 2-6-2 ('Prairie') wheel configuration and emerged as the pioneer of the class in 1936. By 1944 the class comprised one hundred and eighty four  locomotives. The second locomotive in the jigsaw is the 'B1' class 4-6-0, No.1306 Mayflower. Edward Thompson designed the class but this locomotive was only delivered after nationalisation, in 1948, in British Railways (BR) days. It was numbered by BR as 61306 and withdrawn from service in 1967. Sold into preservation at Steamtown, Carnforth it was given the name Mayflower,,originally used  on the scrapped 'B1' locomotive, 61379. It was re-numbered 1306 and liveried in LNER 'Apple Green'. The title of the jigsaw is Green Arrow and  Mayflower. 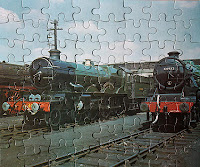 The second picture features two more locomotives, a Great Western Railway (GWR) 4-6-0 'Castle' class example, and another 4-6-0, a 'Black Five', of the London Midland Scottish Railway (LMS). No.4079, Pendennis Castle, of the GWR has already been described in detail in the post of 14th April 2011. The second locomotive in the picture is one of Sir William Stanier's workhorses introduced from 1934. By 1951 eight hundred and eighty six locomotives had been built. Eighteen 'Black Fives', including the one in the jigsaw picture, No.44932, have survived into preservation. No. 44932 was built in 1945 and returned to mainline duties in 2010. The title of this jigsaw is Pendennis Castle and Black Five.
Posted by David at 15:00

The title says it all. In this post, 5th November 2011, I am using two photographs of steam train jigsaw puzzles showing different Great Western Railway locomotives.

The first pic shows a 'County' class 4-6-0 locomotive No.1024 County of Pembroke heading chocolate and cream passenger coaches near Dawlish, on the scenic south west coast. The artwork by George Heiron has been faithfully reproduced by Falcon in this 300-piece jigsaw titled County Class GWR. The 'County' class of locomotives was built between 1945-1947, and totalled 30 examples. The same artwork, as a 500-piece jigsaw, was used by Arrow for the 1978 The Age of Steam series

Picture number two shows a pair of locomotives, side by side, in a puzzle titled GWR Saint and 57xx, part of the 1980 Arrow, The Age of Steam series. The artist is not named. The main line locomotive heading a passenger train under a bridge is 'Saint' class 4-6-0, No.2953 Titley Court. Stationary, on an adjacent line is 5700 class Pannier tank, No.3763. The latter class of tank engines numbered 836 when completed in 1952 (started 1913). The 'Saint' class of locomotives, including prototypes, conversions and rebuilds, eventually numbered 100; they were built between 1902 - 1913.
Posted by David at 21:18