The humble origin of Victory, one of the best loved of all jigsaw manufacturers, lies in a Dorset garden shed. Here, Gerald Hayter cut wooden puzzles for around ten years from c1920. He then rented a workshop in Bournemouth before establishing a business in Boscombe, from where Victory wooden jigsaw puzzles became a household name. For an extensive history of the company, including the complicated nomenclature and numbering systems employed, two books published by Brian P. Price in 1999 and 2000, are a must. I have many Victory jigsaws in my collection ranging from children's examples of 12-80 pieces to adult puzzles of 400+ pieces. I have chosen just three for my blog but I think they are a very interesting trio. 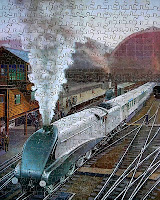 The first photograph depicts a puzzle titled The Silver Jubilee Train, a splendid tribute to this famous express but equally notable for its portrait format. The puzzle pictured is the 400-piece example from the Victory range of 40-400 pieces. The express came into service in 1935 and ran until the outbreak of World War II. In the jigsaw the train is hauled by 'A4' class 'Pacific' No.2509 Silver Link.

The second jigsaw photograph shows off George Heiron's skill as an artist. His painting of Stanier class 7P 'Pacific' No. 6231, Duchess of Atholl, has reproduced well for Victory in this 100-piece puzzle. Heiron's skill at portraying copious volumes of exhaust are on show here as the powerful locomotive hauls a long rake of passenger coaches against a backdrop of winter snow.

The third picture shows another Victory classic jigsaw, titled Flying Scotsman (the train, not the locomotive). This flagship express of the LNER with 'A1' class locomotive No. 4476 Royal Lancer (rebuilt as an 'A3' in 1946) at its head is depicted passing over the famous diamond crossing before entering Newcastle station. The puzzle shown is the 400-piece example from the range of 80-400 pieces.
Posted by David at 19:46