A Tale of Two Locomotives 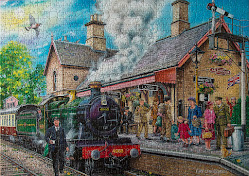 Today's jigsaw, 10 April 2020,  is another 'gem' from the House of Puzzles' portfolio of superb steam train examples. It is a 1000 piece puzzle from the Castleford Collection, titled Bringing Them Home. The jigsaw features the ex Great Western Railway (GWR) 'Hall' class 4-6-0 locomotive  No.4965, Rood Ashton Hall, at Arley Station on the Severn Valley Railway (SVR).

In a modern 're-enactment' scene, World War II Army personnel, men and women, are greeted by friends and relatives, including children, on arriving 'home'. The SVR is one of several Heritage Railways including such retrospective WWII events in their annual programmes. At these special events volunteers wear period dress and uniforms, and other items of period paraphernalia are added to the platforms; items such as milk churns and luggage for instance. A guard standing by the engine and the station master sat outside his office are each pictured with a mug of tea. The station cat is also included in a scene well captured by artist Ray Cresswell.

The history of this locomotive is very interesting with mischievious exchanges and transfers going on between two locomotives at Swindon Works c1961/62. Basically the locomotive is a hybrid of No.4983 Albert Hall - the 10th locomotive to leave Barry Scrapyard in 1970 - and No.4965 Rood Ashton Hall.  Read the story on www.preservedbritishsteamlocomotives.com/4965-rood-ashton-hall