Today's post concentrates on a 2004 jigsaw marketed as a Waddingtons' puzzle by American owners, Hasbro Inc. The artwork is by Malcolm Root. 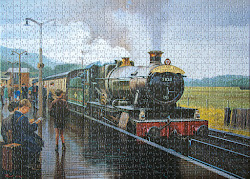 I think Malcolm has been very brave with this painting. Dull, wet weather was never the first choice for artists,  but he has done a first class job in promoting the overall ambience to the viewer. Depicted in British Railways (BR) days, the locomotive at the head of the Cambrian Coast Express is 'Manor' class 4-6-0 No.7820 Dinmore Manor. Because of weight restrictions originating from 1927, small 4-4-0 'Dukedogs' were the selected  locomotives for this famous named train. From 1938, 'Manor' class locomotives were mainly used and other 'light' locos hauled the express in later, BR days. The route was Paddington, Shrewsbury, Aberystwyth and Pwllheli; the train split at Dovey Junction, a section heading south for Aberystwyth and another, north for Pwllheli.