Halstead on the map

Malcolm Root has certainly flown the flag for his native Halstead and his local railway, the Colne Valley Railway. Several of his paintings have been based on his own patch and used also, by jigsaw companies. To be honest, I purchased this jigsaw many years ago, but having completed it I gave it to charity, having thought I had already described it on my blog.  The search bar revealed, not so. So I've replaced the jigsaw again, completed it again, and this time here it is, 15 July 2020, as the 'forgotten' post. Titled Steam Train at Halstead, the puzzle is a 1000-piece example from King. In Malcolm's book, Malcolm Root's Railway Paintings, the painting is titled The Level Crossing, Halstead. 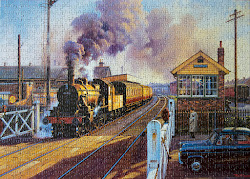 Pictured is a wholesome railway scene with a passenger train passing a signal box and about to cross a level crossing. A high level signal is cut off in the jigsaw. The locomotive is an Ivatt 2-6-0 class 2MT (mixed traffic) type, No.46466, introduced onto the London Midland & Scottish Railway  - known as the LMS or less affectionately as the 'ell of a mess' - in 1946, two years before the birth of British Railways. It was withdrawn from service in 1962. The car to the right is an early 1950's Ford Prefect; the background shows part of the station canopy and Malcolm's home town. The sun reflecting from the side of the locomotive is particularly eye catching; in my trainspotting days this was known as the 'glinting effect' and the locomotive or train as a 'glinter'.
Posted by David at 12:14